Mountain Lakes Dams To Be Restored 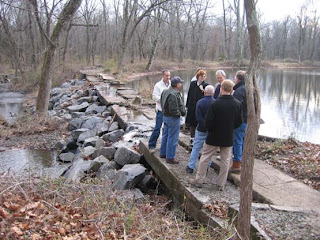 Long-existing plans to restore the historic dams at Mountain Lakes are now moving ahead. Last week, engineers and historians did a walk through to discuss various details of the plans. The dams were built around 1900 in order to harvest ice, which was stored in three-story barns just below the lower dam.

The photo shows the old spillway, now reinforced with loose rock to prevent it from collapsing. There was some uncertainty about whether the lakes could be dredged as part of the restoration, but the township is now more optimistic about funding, including the possibility of tapping into the upcoming federal economic stimulus package. A great deal of silt has accumulated in the lakes over the past 100 years. Two small dams upstream that used to trap the silt are completely filled, and now the upper lake has six feet of silt, with only one foot of water on top.
Posted by Steve Hiltner at Monday, December 22, 2008 No comments: 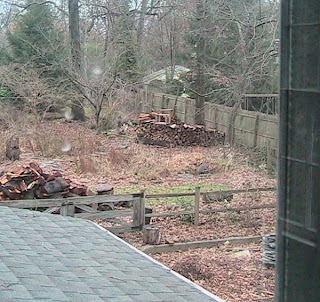 A typical backyard scene on an atypically warm December day. But wait what is that speck of gray near one of the mini-ponds? 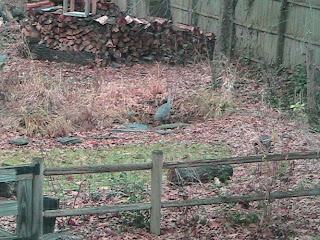 I happened to look out the back window today just as a great blue heron swooped in to take a close look at my water features. After scrutinizing one for awhile, and finding it lacking in edible objects, the big bird strolled over to the other minipond and almost immediately plunged its long neck into the water. Its bill flashed orange as it emerged with lunch, in the form of the one goldfish it hadn't managed to get on its last observed visit two years prior. 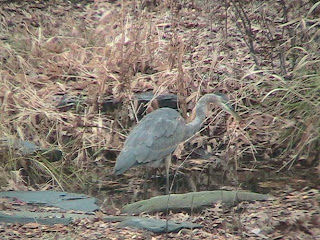 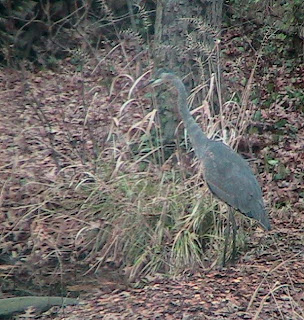 Posted by Steve Hiltner at Wednesday, December 10, 2008 No comments:

Where Do The Children Play?

For anyone interested in the role of nature and play in child development, and the effect thereon of suburban development and school policies, I highly recommend checking out (literally, from the Princeton Public Library or elsewhere) the movie Where Do The Children Play. The Waldorf School sponsored a showing of the movie at the Princeton Public Library last night, with some of those involved in its making on hand to answer questions afterward.

The premise is that children whose schedules are overbooked, who spend large amounts of time in front of computer and TV screens and who are kept indoors by overly protective parents, are at risk. The lack of opportunities to be in nature or to explore their creativity in free play can cause children to lose touch with their creative impulses and capacity for free thinking. Connected to this is the reduced sense of place many suburban kids feel, growing up in neighborhoods where neighbors don't know one another, and where the ability for them to walk or bike to destinations is limited by sprawl. Some excellent interviews with Richard Louv and others are featured.

The movie was developed in Ann Arbor, Michigan, where I lived for many years. Though Ann Arbor is one of the safest towns around, an effort to get kids to walk to school failed miserably, apparently due to pervasive fears of "stranger danger".

More info on the movie can be found at:
http://www.wfum.org/childrenplay/index.html

The library has copies of the movie and companion books.
Posted by Steve Hiltner at Friday, December 05, 2008 No comments:

"Where Do The Children Play", a movie about how "sprawl, congestion, and endless suburban development" have changed the landscape for childhood and may be affecting children's mental and physical health, will be presented at the Princeton Public Library this Thursday, Dec. 4 at 7pm.

It's interesting to note that Princeton used to have high school kids playing the role of "camp counselors" at various parks throughout town during the summer, where kids in the neighborhood could go at any point during the day and play various games. Whereas now the system is centralized, with a rec dept. summer camp at Community Park South, it used to be a free-flowing, neighborhood-based system. Harrison Street Park and Little Brook Elementary are two home bases I've heard about, and there were no doubt others. I've heard, too, that neighborhoods would play each other in sports contests, though this hasn't been corroborated. That would certainly have created a sense of neighborhood identity.
Posted by Steve Hiltner at Wednesday, December 03, 2008 No comments: