There's a house along Lake Drive in Princeton that has a special garden. Soon, the house and garden will be bulldozed and replaced, if history is guide, with sterile lawn and generic house, as the destructive side of prosperity has its way with the landscape. It was an estate sale, and before it changed hands I was invited to help myself to whatever was left in the house's garage and yard. 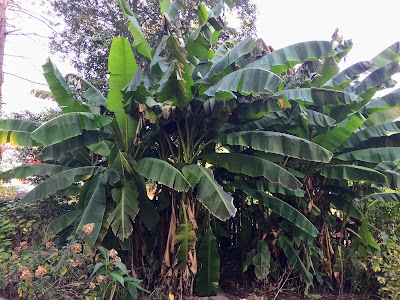 One of the more surprising finds was a grove of banana palms 10-15 feet high. Each year its loving owner would cut the palms down to the ground and mulch the roots heavily with leaves to protect them from the winter weather. And each spring the banana palms would rise to cast a tropical spell on her garden.
We thought it would be great to dig one up and transplant it to the Barden at Herrontown Woods, but the massive root structures looked intimidating. 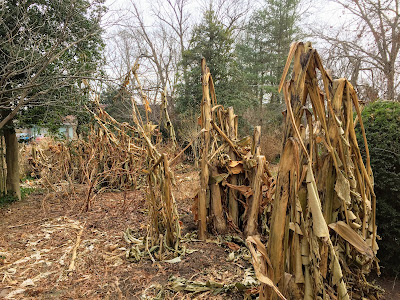 Not surprisingly, by January, they looked like this. Not being familiar with growing bananas in Princeton, I have no idea if the unprotected roots will survive the freezing weather. 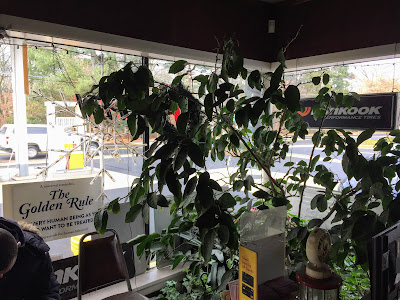 Another longterm visitor from another climate is a lime tree that has taken over much of the front office at Tamasi's Shell station on 206. 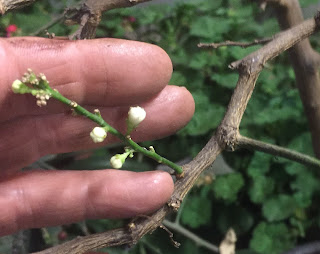 It clearly likes the big southwest-facing windows. While we shiver, it blooms, 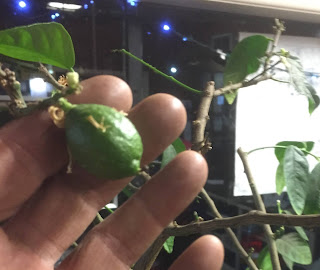 and bears perfectly usable limes. They usually get a handful of fruit, but last year got 40.
Posted by Steve Hiltner at Monday, January 24, 2022 No comments:

I had lived on earth many years before encountering the leaf of a carrot, or a cucumber, or a radish. Planting my first vegetable garden in high school, each leaf was a revelation. It was during college years when I finally passed by a field of peanuts during an environmental field trip in Georgia and Florida. Even then, we didn't stop to take a closer look. Doesn't seem right to eat so much peanut butter and still not have witnessed a peanut plant, with its curious habit of planting its own seeds. 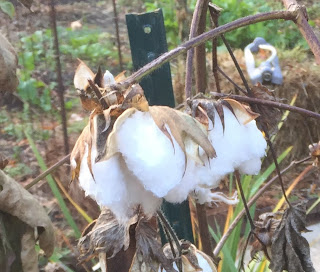 Many more decades would pass before I witnessed a cotton plant, growing in a friend's garden in Durham this past fall. It had been planted for fun, not for the cotton, but it's impressive how much cotton the plant produced, and how much the cotton on the plant looks like the cotton you buy. 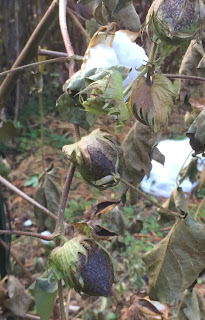 Before the cotton boll opens up to reveal the cotton, the clasping sheath at the base can be seen to resemble 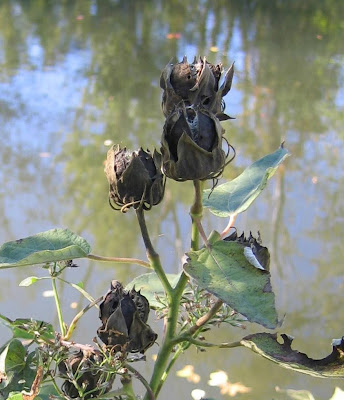 the capsules of our native rose mallow hibiscus that grows along the shores of Lake Carnegie. The plants are in fact related, both being in the plant family Malvaceae (mal-VEH-cee-ee), along with okra and cacao. Genetic analysis has also put our native basswood trees, Tilia americana, in the Malvaceae family.
Doing some reading, it was surprising to learn that the two most widely grown species of cotton are native to the Americas (as are peanuts, for that matter). 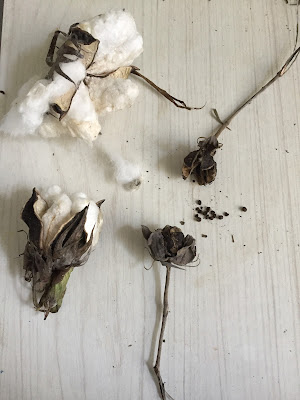 The cotton fibers evolved to catch the wind and carry the seed. Our local Hibiscus moscheutos has no such means of dispersal. The seeds are held loosely in the erect, open capsule until they are bumped by a passing animal or shaken by the wind. 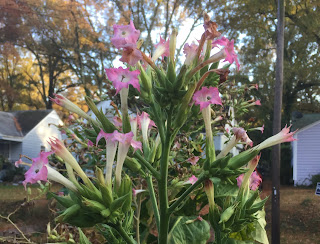 Standing next to the cotton plant in the North Carolina garden was another species native to the Americas: tobacco, also grown on a lark. 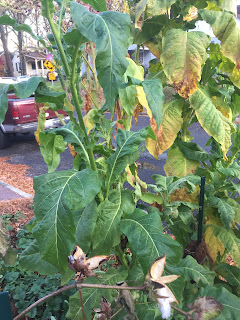 Tobacco is in the nightshade family, Solanaceae, along with tomatoes, potatoes, eggplant, and peppers. Some members of the family that pop up on their own around Princeton are the nightshades, ground cherry, and Jimsonweed.
Once one knows about familial relatedness among seemingly disparate plants, it's fun to look for similarities of form in flower or leaf, and begin to see a web of connection in the plant world.
Posted by Steve Hiltner at Sunday, January 16, 2022 No comments:

A Mystery Tree Grows in Princeton 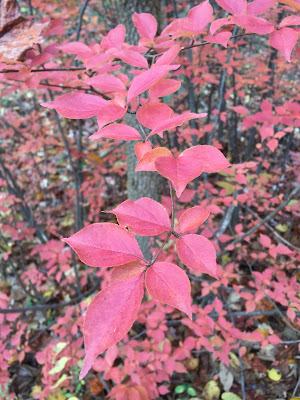 There's a small tree I've been encountering occasionally in Princeton woodlands, and no one thus far has been able to figure out what it is. I discovered it years ago, while preparing an ecological assessment for the Friends of Rogers Refuge. Over the past couple years, I've encountered a few younger versions in Herrontown Woods, and was finally moved to learn its identity. I thought it would be a simple matter to send some photos around to people particularly knowledgeable, and an answer would quickly be forthcoming. But no. This is turning into a botanical version of Stump the Stars. 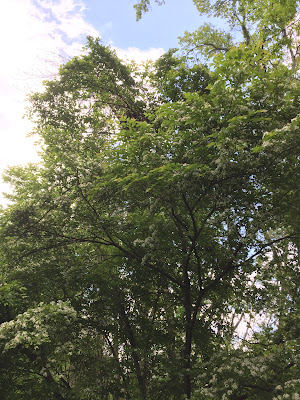 I first saw it while taking that dirt road into Rogers Refuge, long known as a birding mecca just below the Institute Woods. The photo shows it in full bloom, though you have to look really hard to see the clusters of small flowers.
As someone schooled in botany, my experience of driving is different from most people's. While keeping an eye on the road, a botanist is also keeping an eye on the texture, shape and color of vegetation streaming by. You learn to identify trees in an instant. Their seasonal bloom or fall color can make it easy, but even their overall growth form--their body language--can be enough. The army fatigue bark of sycamores is distinctive, running up a valley in winter. Or the blotch of blue a Princess Tree's blooms make among the trees lining a highway.
Over time, what for most people registers only as a blur of greenery becomes instead a language to be read. Driving along, reading the language of the roadside out of the corner of my eye, I'll very occasionally see something outside of my vocabulary of plants. Sometimes I pass by a given spot many times before a particular flower or growth shape catches my eye and I just have to stop to take a closer look. 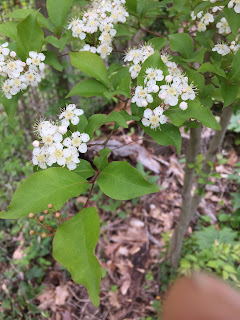 That's how this mystery tree first caught my eye, while driving into Rogers Refuge some years back in the second week of May. 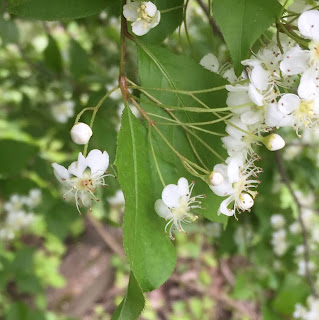 It has the kind of bloom that looks showy close up, but doesn't have much of an effect from a distance. 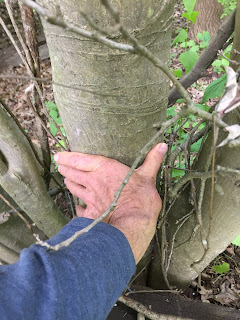 Though most seen elsewhere in town tend to be the size of shrubs, the specimen in Rogers Refuge is about 20 feet high, with a cluster of sizable trunks. 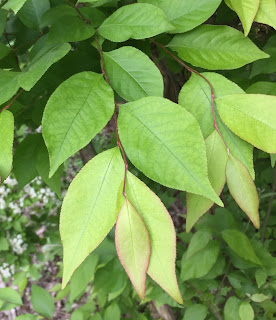 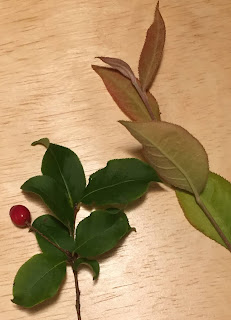 Fruits are red, and scarce considering all the blooms.
Mike Van Clef mentioned "another confusing non-native relative found at Jockey Hollow."
Bob Wells of Morris Arboretum sent a scholarly response, based on some but perhaps not all of these photos:

I have no doubt that this is one of the Aronias:

He referred to the texts by Dirr and Easton, particularly a quote from Easton: “Chokeberries remind us that scientific taxonomy is only the least imperfect of the tools that we have fashioned to help us classify and understand organisms”
I'd love to call it red chokeberry and declare the case closed, but the leaves don't look or feel quite like any red chokeberry I've ever seen.
Posted by Steve Hiltner at Saturday, January 08, 2022 4 comments: