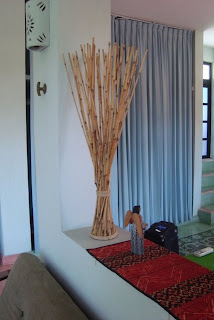 While visiting Merida on the Yucatan peninsula in Mexico, we stayed at a hotel with rooms so tastefully decorated that one could turn in any direction and see a composed scene.

One object that put to good and decorative use what in Princeton is often an overly aggressive plant was this wrapping of dried bamboo cuttings into a vaselike pattern. 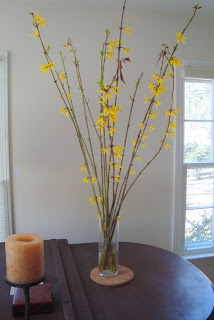 The same effect can be rendered with cuttings of forsythia, which have the added benefit this time of year of opening their flower blossoms after a week indoors.
Posted by Stephen Hiltner at Saturday, February 26, 2011 No comments:

Slow To Learn About Turtles 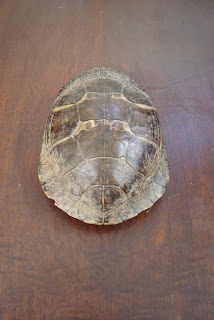 It was a Tuesday night, and the Keeper of the Playmobile Village had another entry to write in her 5th grade science journal. She retrieved a long-ignored old turtle shell from the back porch, and though the shell did not look to be a particularly promising door to discovery, we were taken by surprise. Who knew, for instance, that the scales (called scutes) that form a pattern on the turtle's back are actually skin that covers some 60 bones comprising the shell? Certainly not we who had until now been largely unmindful of turtle lore. Or that the dark color of turtle shells helps them absorb the sun's heat when basking on a log. Or that the way the seams between the scutes extend pretty much straight across the back of this turtle (photo) from side to side make this an eastern painted turtle that has long since lost its colors. Its surviving offspring are likely hibernating in some nice mud at the bottom of a lake or stream right now, dreaming of basking in the sun through summer days, and living to the ripe old age of 55, as painted turtles have been known to do.
Posted by Stephen Hiltner at Saturday, February 26, 2011 No comments:

Another cabin fever relief walk, to see if there are any signs of spring stirring at Pettoranello Gardens, Community Park North woods, Tusculum meadows, and Witherspoon Woods. Will likely include a visit to Devil's Cave if trail conditions allow. We'll try to steer clear of mud, but dress accordingly just in case. Meet at the Community Park North parking lot, on Mountain Ave. next to 206, at 1pm. Walk sponsored by Friends of Princeton Open Space.
Posted by Stephen Hiltner at Friday, February 25, 2011 No comments:

Email ThisBlogThis!Share to TwitterShare to FacebookShare to Pinterest
Labels: Walks

More buzz on bees. Got into a conversation the other day with a botanist who shifted careers to study native bees, partly out of fascination and partly because so little is known about them. We got to talking about blueberry bees, which use rapid wing beats to shake pollen loose from the flower. Here's a description I found via an internet search:

"The southeastern blueberry bee (Habropoda laboriosa) is so named because it is native to the southeastern US and forages primarily on blueberry (Vaccinium spp.) plants. It resembles a small bumble bee (Bombus spp.) and is abundant in blueberry orchards throughout its range. Blueberry plants are most effectively pollinated by sonication and the southeastern blueberry bee is very efficient at this. The bee grabs onto a flower and moves its flight muscles rapidly to release the pollen. The bee's face is then covered in pollen, which is inadvertently deposited at the next flower on which the bee forages." (nbii)

The frequency of the wing beats determines whether the pollen is shaken loose. Since honey bees don't use sonication to shake pollen loose, they have a harder time pollinating blueberry flowers.

Something to look for when the blueberry flowers come out this spring. He also said that native bees can be safely petted, which I had heard before, in reference to bumble bees. Since I've never tried it, please don't take this as a recommendation, but it is interesting to consider that fascination and respect may be more useful responses to bees than a blanket fear. Here's a post, found via an internet search, that includes a video of bumble bee petting, described as a relaxing activity.
Posted by Stephen Hiltner at Thursday, February 24, 2011 1 comment:

A Backyard B&B For Wildlife 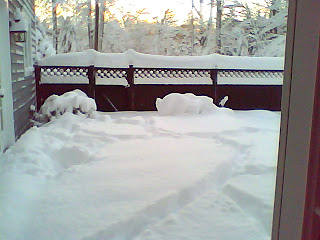 This is a bittersweet story sent to me by my good friend Brownlee. She had long had groundhogs living under her patio deck, but recently noticed some new and different tracks in the snow. 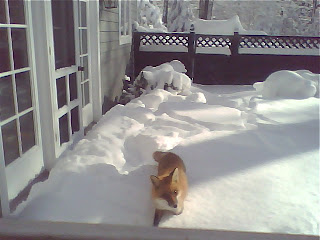 Turned out a pair of foxes had decided the underside of the deck would make a fine "bed and breakfast."

Looked like a fine arrangement for all, except the groundhogs, but Brownlee started noticing signs of mange on one of the foxes. A call to Princeton's animal control officer led to trapping the fox and taking it to the Mercer County Wildlife Center, where it unfortunately could not be saved. The other fox will be trapped this week, and hopefully is healthy enough to respond to treatment. According to Brownlee, the mange-causing mites die off after a month without a host, allowing the treated fox to be returned to the same location. As one could guess, the loss of fur due to mange can be especially hard on wild animals in the winter.

Some informative websites on mange, which includes various species of mites that afflict a wide range of animals, can be found here and here. Thanks to Brownlee for the photos.
Posted by Stephen Hiltner at Sunday, February 20, 2011 No comments:

We had a great walk in Herrontown Woods a week ago. The abundant snow brightened the scene, and there were lots of bright questions, including why the common names for trees are as they are. Why are oaks called red or white or black? And why is there a dog in dogwood? In the midst of a towering forest, sometimes the simplest questions can leave a walk leader stumped. Even my assertion that the trunk of a musclewood tree looks muscular was received with considerable skepticism by a charming young girl named Meadow, who wanted most of all to head off-trail and climb some of the boulders beckoning as we headed up into the Princeton ridge. Not a bad idea, that, but we ended up staying on trail and more or less on topic, discussing the ways to know a tree by its bark, or craning our necks to see last year's blossoms on the soaring tulip poplars. (Note: For some interesting cultural history of dogwood, and speculations on the origins of its name, click here.)

One curious sighting was a young tree, perhaps 15 feet tall, whose bark had been stripped clean off from the top all the way down to about our level, where shreds of bark still hung on. The exposed wood was smooth and shiny, as if carefully burnished by someone on stilts. Various theories were put forth: lightning, perhaps, or the rubbings of a wayward giraffe. I doubted it was lightning.

On the way back, we stopped by the Veblen farmstead, where the boarded up home of the famous mathematician still sleeps, dreaming mysterious dreams and waiting for someone to solve the riddle of its future.
Posted by Stephen Hiltner at Saturday, February 19, 2011 No comments:

Email ThisBlogThis!Share to TwitterShare to FacebookShare to Pinterest
Labels: Places To Visit, Walks

Some Buzz On Native Bees

Rutgers entomologist Rachael Winfree gave an information-packed talk on native bees at DR Greenway this past Thursday. Here is some of the information I packed for the trip home, with apologies for any bruising of the truth that might have occurred in-transit. Rachael has a very useful downloadable brochure on the subject of native bees and the sort of plants and nesting habitat they need (link below).

Posted by Stephen Hiltner at Saturday, February 19, 2011 No comments:

Free Talks On Bees and Butterflies

This is part reminder, part update. The talk this Wednesday is about the many species of native bees hereabouts.

Rachael Winfree, "The Business of Bees"
Wednesday, February 16, 6:30 pm
Rick Mikula, "Butterflies: Their Beauty and Perils"
Thursday, March 10, 2011, 6:30pm
Note: This is the new date for the program that was "snowed out" in January
These programs will be held at DR Greenway's Johnson Education Center, One Preservation Place, Princeton. All programs are open to the public, and registration is helpful by calling 609.924.4646
Posted by Stephen Hiltner at Tuesday, February 15, 2011 No comments:

Telling North and South in a Snowbound Forest 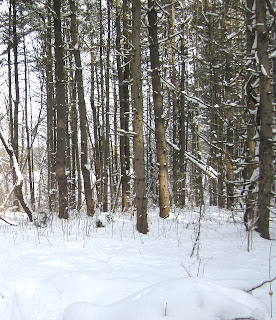 There's a prairie wildflower called Compass Plant that orients its leaves north and south, which could prove handy sometimes in a featureless sea of grass. A couple weeks ago at Community Park North, the snow on the trees was performing a similar service. Look northwards and the tree trunks are bare. 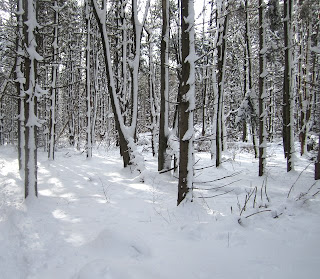 Look to the south (at the north sides of the trees) and the tree trunks are coated with snow that the sun couldn't get to. 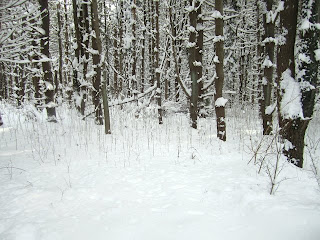 The snow also makes it easier to see the dense miniature forest of ash tree seedlings, just a few feet high, poised to seize the daylight when the evergreens begin to falter. This is not your normal New Jersey piedmont forest.
Posted by Stephen Hiltner at Tuesday, February 15, 2011 No comments:

Email ThisBlogThis!Share to TwitterShare to FacebookShare to Pinterest
Labels: Places To Visit

I'll be leading a nature walk to explore Herrontown Woods on the east side of Princeton this Saturday at 1pm. The walk is open to the public, and sponsored by Friends of Princeton Open Space. To reach the parking lot for the park, drive out Snowden Lane. Just before reaching Herrontown Road, turn left down the road across from the Smoyer Park entrance and drive to the end.

The woods are filled with light this time of year, and the trees are easy to identify by the grain of the bark and the patterns of the twigs. Donated to Mercer County long ago by the famous mathematician, Oswald Veblen, and his wife Elizabeth, Herrontown Woods includes the Veblen's house, cottage and barn, where Einstein was a frequent visitor. The buildings have been boarded up for eleven years, and will likely be torn down if action is not taken soon to save them.
Posted by Stephen Hiltner at Thursday, February 10, 2011 No comments: 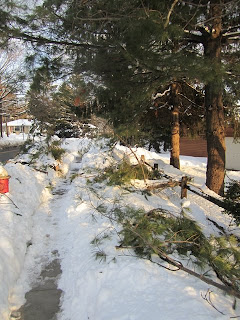 One way to identify white pines around town is by all the branches they lose in heavy snows. 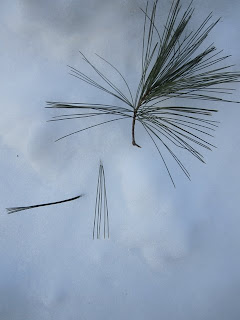 Identity can be confirmed by pulling several clusters of needles off the stem and counting how many are in each cluster (fascicle). White pines have needles grouped in clusters of five--the same number as there are letters in "white".

One can also determine the age of a white pine by counting the whorls of branches on the stem. One whorl is produced each year.

Posted by Stephen Hiltner at Wednesday, February 02, 2011 No comments: