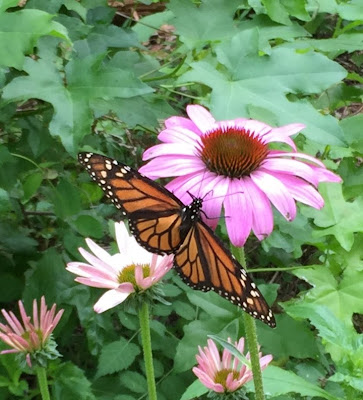 A monarch graced our "Phoenix Garden" next to the Herrontown Woods parking lot with its presence on a bright, sunny morning yesterday, July 13. It took an interest in the purple coneflowers transplanted into the garden this spring, and offered evidence of the importance of the garden for sustaining pollinators in Princeton through the summer months when forests offer few flowers.

The sighting prompted an internet search for the latest on the monarch's status, with one longtime monarch tracker, Chip Taylor of Monarch Watch, predicting that weather conditions this year are thus far allowing monarchs to rebound somewhat from the historic lows of recent years.

If you google "monarch butterflies" and then click on "news", you'll find lots of articles, for instance about efforts to create better habitat for them in Iowa. There's research on the impact of higher CO2 levels in the atmosphere on monarch's health, and Chip Taylor's detailed blog posts at MonarchWatch describe how higher temperatures can impact migration.

We don't yet have milkweed growing at the garden, but there are patches of common and purple milkweed in clearings near the Veblen House that can provide food for monarch larvae. Places where sun reaches the ground, whether in people's yards or at the Phoenix Garden (so-called because it's planted in the opening made after storms blew down the white pine plantation at Herrontown Woods) are critical for sustaining the summer flowers and milkweed that monarchs need to reproduce.
Posted by Steve Hiltner at Saturday, July 14, 2018 No comments:

Who's Been Eating Our Lilies? -- An Update on Deer in Princeton 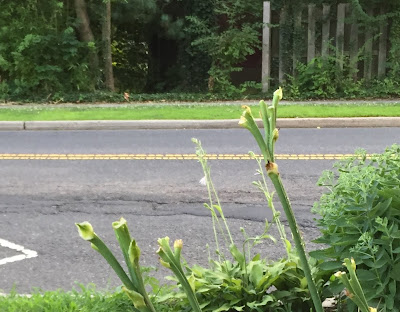 What's been eating our lilies on busy Harrison Street?! Buds on the lilies lining our front walk had generated considerable anticipation in the household, until they disappeared overnight. We arrived in Princeton a few years after deer began being professionally culled in 2000. Back then, we'd see herds of deer wandering down Murray Ave, or even main roads like Harrison Street.

Though Mayor Marchand took a lot of heat for culling deer, she and township council stuck to their principles, and the result has been dramatically reduced carnage on the roadways, venison for food kitchens, and a rebound of the native flora in local nature preserves. The remaining deer are better fed, finding in the wild a greater abundance of their preferred foods.

Another benefit has been reduced damage to gardens. Our garden had prospered deer-free for years, until one showed up in the backyard over the winter. Evidence suggests there have been visits since then, and now our front yard's centralized setting along Harrison Street is proving no guarantee of safety from their unsolicited landscape services.

All of which prompted an inquiry into how the town's deer culling has been going lately. The temporary lack of an animal control officer and the increasingly quirky climate contributed to a relatively unsuccessful deer cull in the winter of 2016-17. This past winter, however, they were very successful with the culling. According to this update from council member Heather Howard:


"Deer hunt was much more successful this year - in part because of colder weather. This year, 196 deer were harvested, as compared to 63 last year. Also, initial analysis of traffic data shows that deer-related motor vehicle accidents were down.

Looking ahead to next year's hunt, we are looking for new areas to expand the hunt. There have been an increase in deer complaints in the Riverside neighborhood, which is a hard neighborhood to find suitable areas for hunting, because there are no public properties and private lots tend to be smaller.

Looking ahead to next year's hunt, we hope to have our annual contract for bow hunting on the Council's agenda by the end of the summer, so they can start with the hunting season in September."

It's important to emphasize that bow hunting is not adequate to control deer numbers. To restore the ecological balance lost when we extirpated the natural predators of deer long ago, it's necessary to have professional hunters who can operate safely in our preserves, to augment what the bow hunters are able to do. One comforting thought is that the deer have lived quality, free-range lives, unlike so many of the animals we eat.

How this relates to the lost lilies in the front yard? Heather's mention of increasing deer complaints in the Riverside neighborhood, along with the surprising appearance of deer in our yard despite deer culling, might suggest that the deer that are eluding the culling are those that spend more time in the densely populated neighborhoods. It's a theory that will be tested by time, and lilies all over town.
Posted by Steve Hiltner at Tuesday, July 10, 2018 1 comment: 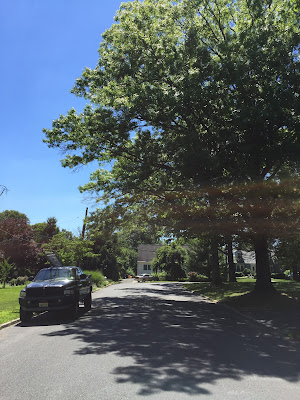 It's time to shine light on shade. If Princeton held a contest for the coolest, best shaded blocks, I'd nominate a couple blocks in my neighborhood. One is at the corner of Erdman Avenue and Tee-Ar Place, where four giant pin oaks, healthy despite the local prevalence of bacterial leaf scorch, extend their broad limbs southward and westward over the pavement. 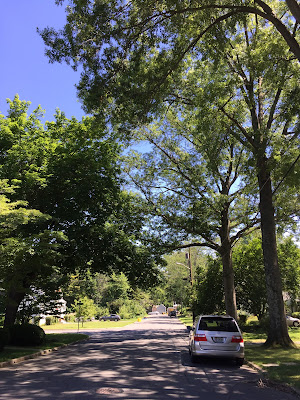 Another is on Stanley Avenue, where some more healthy pin oaks are doing the job. On the left is a Norway Maple--not my favorite species, but in this case well placed to shade the pavement.

Having a contest would shine light, so to speak, on the importance of being strategic about where trees are planted. Some homeowners may understandably want to have sunlight reach a garden, or solar panels on the roof. Neither of these need conflict with optimizing shade where it is most important--over pavement, where the sun's light energy would otherwise be turned into heat when it hits blacktop, contributing to the urban heat-island effect.
Posted by Steve Hiltner at Tuesday, July 10, 2018 No comments: 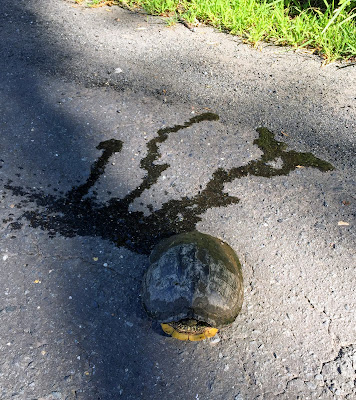 If a truck passed over me while I was crossing the road, I'd probably pee in my shell, too. That's what it looks like happened here, having encountered the turtle on that small university road on the West Windsor side of Lake Carnegie, just after a truck had passed over it.

Just one more insult for a turtle to endure. It refused to tell me which side of the road it preferred to be on, so I put it on the canal side, where the habitat is, and hoped for the best. 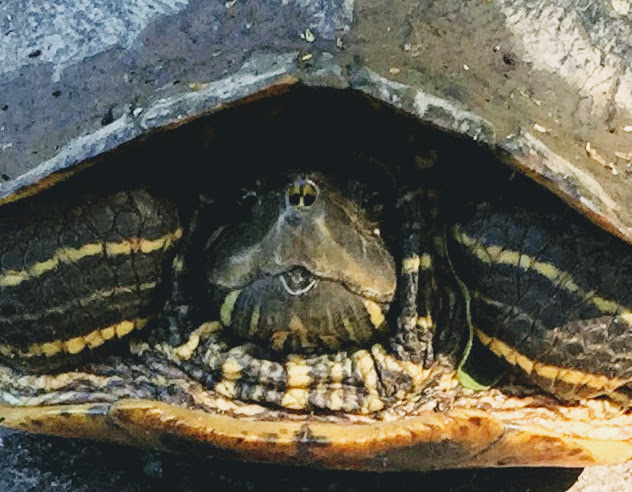 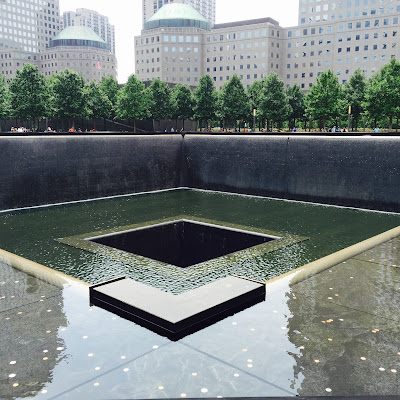 Stymied from reaching our intended destination of the Brooklyn Botanical Garden by various closed subways on a Sunday afternoon, we found ourselves close by the World Trade Center site, and decided to take a look. The footprints of the twin towers have each been turned into chasms where curtains of water fall from one depth down into a still deeper abyss. The symbolism is powerful--ascension transformed into endless descent. The curtains of water, played with by the wind, can sometimes appear to be pulling apart, as if something were about to be revealed, but the moment passes and the water returns to a uniform downward motion. 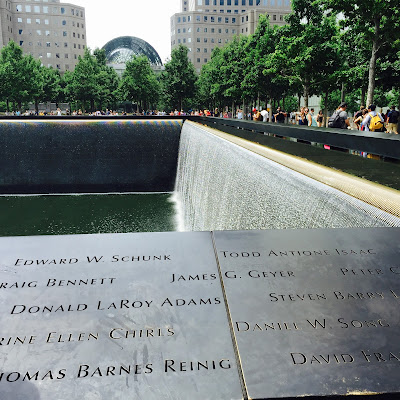 But this post was to be about the plantings we saw, which were hundreds of swamp white oaks planted in rows. Swamp white oaks can be found occasionally planted along Princeton's streets, and growing naturally in low-lying forests. Strange that a species found naturally in water-logged lowlands would grow well in the dry, compacted soils of city streets, but the tree is adapted to the low oxygen levels that both soils share. Some of the 9/11 trees came from a NJ nursery that specializes in memorial plantings.

Water used to sustain the trees comes from underground cisterns that capture runoff. 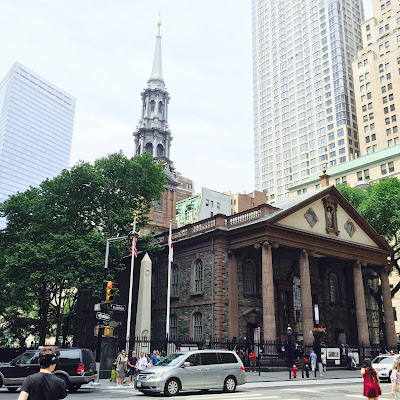 Nearby is St. Paul's Cathedral, which improbably survived the crash of the towers. The cemetery behind the church is filled with headstones grown faceless with time. 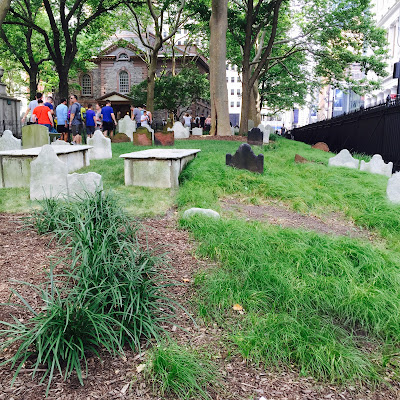 Along the fringe of the cemetery grows a pure stand of what looks like a native sedge (on the right in the photo)--the sort that gets only a foot or so high and can form expansive, parklike sedge meadows in local woodlands. 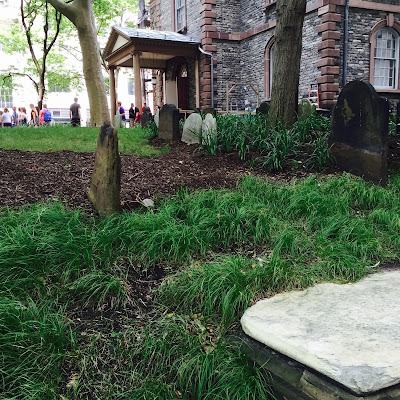 NY City now grows many other unexpected echoes of native habitats, the most recent discovery being Brooklyn Bridge Park, where one of the trails runs along a beautifully maintained stream habitat packed with native species.

But that joy of diversity might be out of place at the 9/11 memorial and St. Paul's Cathedral, where the monocultures of swamp white oak and sedge seem intended instead to reinforce a uniform response of grief.