There was a time when the manipulation and utilization of trees formed the foundation of any sustainable community. Closely tended, trees provided fuel, food, and forage, keeping the home fires burning and the pantry well-stocked. Over the past couple centuries, we have drifted away from that deeply entwined relationship with arboreal nature, and now hold a romanticized view of trees as something to plant and then stand back. When a tree is taken down, we can think of nothing better to do with its wood than to grind it up, trunk and all, and feed it to the decomposers, hastening the return of its collected carbon back to the atmosphere. Children are warned to stay off trees, lest they fall, and environmentalism is defined largely as a passive protection of open space. Trees are to be hugged, not utilized.

Princeton was offered a much different view this past Sunday, during a talk at the Princeton Public Library by William Bryant Logan, author of Sprout Lands: Tending the Endless Gift of Trees. His visit was co-sponsored by Marquand Park and initiated by arborist Bob Wells. Logan is an arborist, not an activist, yet his book seeks to raise awareness of two nearly lost words--coppicing and pollarding--and an active way of interacting with trees that for millenia benefitted not only people but nature itself. Nature, it turns out, has talents that can be trained much like our own.

Coppicing involves periodically cutting a tree to the ground, which may sound unkind, but if done in the right way with the right kinds of tree can result in numerous vigorous sprouts that produce slender stems for basketmaking, poles for fences, growing mushrooms or making charcoal, nuts for people and forage for livestock. Pollarding also involves periodic cutting of the tree, but farther up on the trunk, so that the resprouts are beyond the reach of browsing animals. Though such aggressive pruning may sound harmful, Logan describes this ancient practice as a kind of renewal that removes accumulated problems and allows a tree to start over again. It's not uncommon for a coppiced or pollarded tree to live 1000 years or more.

Most of us who pay attention to trees have been vaguely aware of these techniques. For an American, it can come as a shock to see them on display in the streets and countrysides of Europe. My first doubts about our entrenched let-grow approach to urban trees came in the 1990s after moving to North Carolina, where I soon witnessed the devastation wrought by Hurricane Fran. A pollarded oak survived the winds, while many of its untrimmed brethren came crashing down. Years later, on a gray, wintry day in 2014, prompted by the silhouettes of some aggressively pruned trees in my Princeton neighborhood, I read up some and posted on this blog about how pollarding in Princeton could make our neighborhoods safer, allow us to better integrate trees and rooftop solar panels, and use trees to more effectively absorb excess atmospheric carbon and inject it into the ground.

The revelation for Bill Logan, who is on the faculty at Brooklyn Botanic Garden, also began on a wintry day, while standing in front of the Metropolitan Museum of Art, where his company had been given the responsibility of caring for a grove of pollarded London plane trees. Realizing the limits of his knowledge on the subject, he began what would become a journey back in time and around the world to recover the techniques and tell the story of a nearly lost art of cultivation central to past civilizations and relevant to our own. The eloquently narrated journey, enlivened by a clear love of culture and horticulture, along with vivid memories of encounters with trees in his youth, takes us from England to Spain, Norway, Japan, and ultimately to Logan's homeland in California, where Native Americans would use fire to stimulate the abundant sprouts and acorns that allowed them not only to survive but to prosper.

In each case, coppicing and pollarding served as a foundation for cultures that interacted with nature not in the "impose and extract" manner that has dominated the industrial age, but in an exchange in which both people and nature could flourish. Coppiced hillsides were harvested in rotation on fifteen year cycles. Each fresh harvest allowed sunlight to reach the ground, awakening dormant seeds and spurring a surge in vegetation that transitioned in succeeding years from herbaceous growth to brambles and then back to shade as the coppiced trees regrew. Each stage of succession supported its own cohort of plants and animals--a diversity twice that of an unmanaged forest.

It is Logan's loving description of the coppicing common in Japan before World War II that is the most inspiring and also the most heartrending, given all that was lost in the post-war modernization and urban expansion. Coppiced hillsides held the soil and absorbed the rainfall that in turn fed springs critical for growing rice in the valleys. These, Logan realized, were the landscapes described in the classical Japanese poetry he had encountered as a young man in college.

There was a time, then, when nature around the world was intensely managed, and richer for it. Multiple times, Logan describes how this management would sometimes go awry, and people would need to adjust their techniques. Through mistakes, people learned how to live with the nature they depended upon. My speculation is that Native Americans, new to this continent, at first erred in their overharvest of megafauna, then took lessons about co-existence from the resulting extinctions. Our own immigrated civilization has in turn made far greater mistakes, and has resisted learning from them, with heedless extraction countered by hands-off preservation, neither of which serve nature's needs, nor ultimately our own.

Though Logan does not overtly advocate, his research and writings point to the possibility of re-integrating people with nature. Restoring nature could include restoring the positive role our economic needs once played within it. With knowledge and a caretaker''s sensibility, we would shift from being antagonists or passive protectors to active protagonists--allies and beneficiaries of a balanced, diverse and prospering nature.

There are, of course, challenges. Past neglect leaves a legacy that is hard to overcome. One audience member pointed out how invasive species could derail the once rich succession of native species that coppicing had in previous centuries produced. Logan describes the challenges of renovating a pollarded tree whose limbs have been allowed to overgrow. The long eclipse of these techniques is reminiscent of the long suppression of beneficial fire in America's forests and prairies, beginning with the ban in 1911 that led to dangerous fuel buildups in our forests--the explosive conditions that feed the mega-fires we see today. Like people, a neglected and abused nature cannot simply be reset to a previous era.

Personally, I view Logan's research as relevant to our management of Princeton's open space, and in particular the land surrounding the Veblen House and cottage at Herrontown Woods. The techniques he witnessed in western Norway, a combination of grasslands and pollarding that he described as "one of the most intelligent systems of farming anywhere in the world," suggest it's worth exploring what Veblen's ancestors in south-central Norway were doing on their farms in the Vadres valley. Many native species nurtured by Native Americans--blueberries, shadbush, Blackhaw Viburnum, hazelnut--grow in Herrontown Woods, their fruiting suppressed by deep shade. A meaningful task, already begun, would seem to be to manage open areas where these understory species can prosper.

After the talk, Bob Wells and I gave the author a tour of the Veblen House site, where plantings of pawpaws, hazelnuts, and butternuts fit nicely with the theme of his talk. When I took the opportunity to ask Bill what, beyond the ban on forest fires in 1911, shifted us away from an active management of trees, he offered a surprise answer. He speculated that a major shift came in the mid-19th century, when the saw became cheaper than the axe. Since trees could then be easily turned into boards, sprouts became less useful, and trees were allowed to grow up. The proud culture of the axe faded before the advance of the saw. Suddenly, as we walked the wooded corridor between the Veblen House and Cottage, Veblen's love of wood and the chopping thereof took on a deeper historical meaning.

The history of coppicing and pollarding, beautifully told in Sprout Lands, suggests that the way forward includes recovering much that has been left behind. In describing past eras, Bill Logan also describes living remnants in Europe and restoration of coppiced landscapes in Japan. These point to a way to prosper by working more actively with and within nature.
Posted by Stephen Hiltner at Thursday, October 17, 2019 No comments:

Monarchs Tanking Up for Journey South

All summer, the monarchs were on the go, alighting on flowers only long enough to catch a sip before moving on. The business of summer for monarchs is to increase their numbers, generation by generation, but the last generation of the year is tasked with a much different agenda. For the last couple days of September, we had five monarchs lingering in the backyard, shifting from one New England aster to another, methodically tanking up for that 2500 mile journey south and west to a mountain in Mexico. With delicate but improbably powerful wings, and no experience or memory beyond what is embedded in their genes, they masterfully navigate through that turbulent ocean of air. They are this year's last generation and next year's first. Barring calamitous weather in their winter hideaway, come March they will fly the first leg of the multigenerational journey northward in 2020, so that their descendants can grace our gardens once again.

Note: The website JourneyNorth is good for tracking the migration both north and south. The monarchs tend to arrive at their winter roost in the first few days of November. 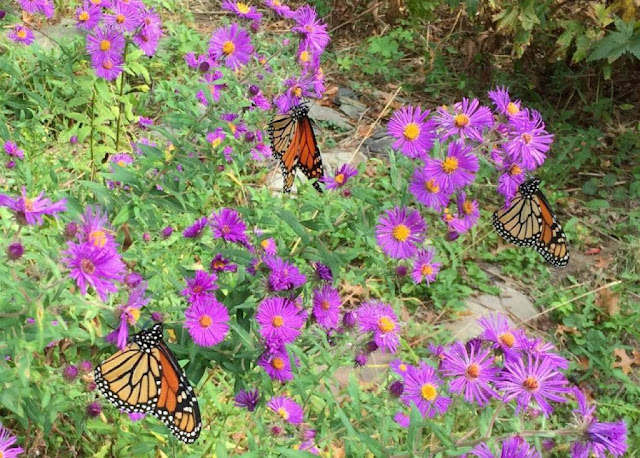 Posted by Stephen Hiltner at Thursday, October 17, 2019 No comments:

The Edible Aril of Yew 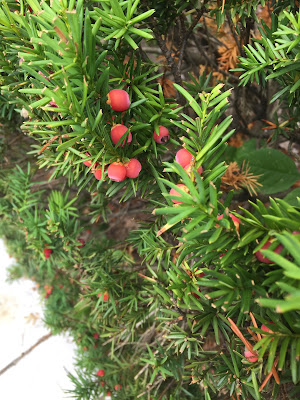 Said the Duke to the Count
in the town of the Prince,
"Have you heard of the Edible
Aril of Yew?"

Said the Count in reply,
"I don't see how a cone
could be anything tasty.
Since yews carry poison
we best not be hasty."

And so they walked on
past the closely trimmed hedge,
for fear of the toxins
in needle and seed, 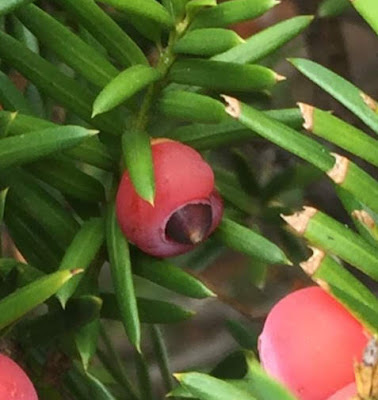 the better for me on the arils to feed.

(Note how the seed sticks out a bit from the surrounding mug-shaped aril that's red and fleshy when ripe. The ripe aril is edible, but spit out the seed.)
Posted by Stephen Hiltner at Friday, October 04, 2019 No comments: