If people love trees so much, then how do we explain Jill Biden's choice for a painting that was part of Inauguration Day ceremonies in the Capitol rotunda. Painted by African American artist Robert Duncanson as the Civil War was looming, Landscape With Rainbow depicts a pastoral paradise in which a young couple and their cattle head back to a homestead blessed by a rainbow. 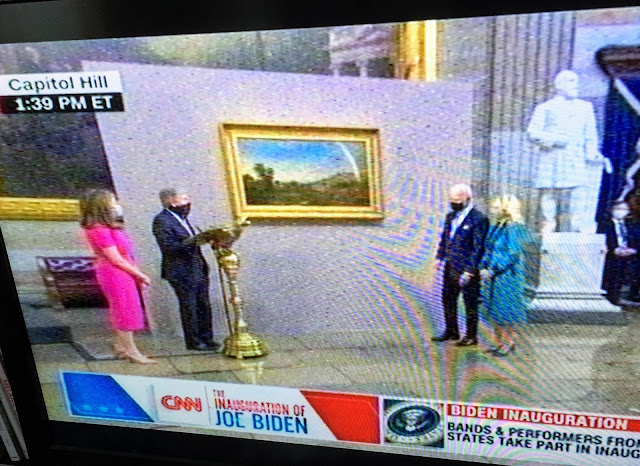 A closer look reveals that the distant hills in the painting are forested, but it is pasture--albeit a bit overgrazed--that dominates this optimistic landscape. Though people love trees, we also love vistas, which trees are very good at blocking. Who hasn't climbed a mountain, expecting a grand vista at the top, only to find that trees have grown to block the view?
It seems strange sometimes that communities don't actively seek to create and preserve vistas, given how pleasing they are. If people can see into the distance, maybe they'll think into the distance as well. A vivid memory from the Sourland Mountains, just up the road from Princeton, is a view of the Manhattan skyline. It came as a complete surprise, and was made possible only by the ongoing suppression of trees along the gas pipeline right of way that extends up and over the mountain ridge. Ideally, vistas would be made possible in our world by something less linear and fossil fuel-related than a pipeline, but our approach to managing preserved open spaces seldom offers an alternative means of creating areas that are more open. 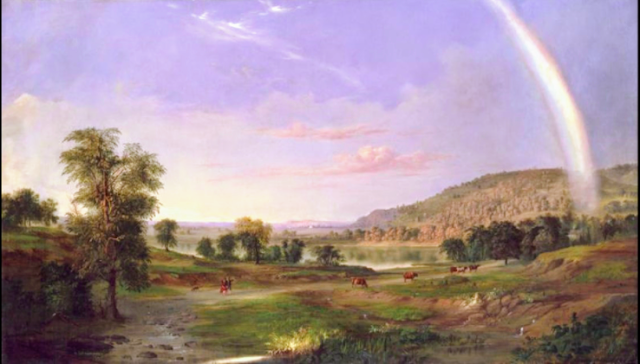 Also running counter to open space preservation norms, the focus of optimism in the painting is a house, embraced by nature, towards which the rainbow, people and animals all point. One approach to purchasing open space for preservation is to demolish any buildings left on a newly preserved property. We had to overcome this bias against buildings embedded in open space in the process of saving Veblen House and Cottage at Herrontown Woods.
One question, then, is how to adjust the classic view of open space--as uninterrupted forest--to consider the clear attraction we have for the mosaic of habitats depicted in this painting, where people play an active role in the landscape. What is pleasing to people can also serve the needs of biodiversity. At the Botanical Art Garden at Herrontown Woods, we are actively preventing a forest opening from reverting to the deep shade that stifles the growth of so many native plant species less gifted with height. Succession to forest need not be considered the only natural destiny for a landscape. Historically, such forest openings would have been maintained by periodic fire, in what is called a fire-climax community.
Though a deep forest of towering native trees can evoke a sense of awe and reverence, and deserves to be preserved, many areas of preserved open space are thick with stunted, second-growth trees. Add the typically dense layer of invasive shrubs and the effect becomes cluttered and claustrophobic. As the death of ash trees due to the Emerald Ash Borer opens up the forest canopy, we may want to manage some of these openings to create a more varied habitat. If the non-native invasive shrubs can be limited, and young trees kept from reclaiming the sunlight, there are many native shrubs that could flourish in a more illuminated understory. Spicebush, hazelnut, serviceberry, native azalea, blueberries, Viburnums, Hearts-a-burstin'--these are a few of the native shrubs that would bear abundant fruit for wildlife if given more sun.
One of the most optimistic moments I had in my life had some parallels to the Duncanson painting. I was driving out of Washington, DC after picking up a passport. The president at the time was highly competent and believed in government, and the WhiteHouse gleamed brilliant white in the afternoon sun as I drove past. On the radio was a live broadcast of Copeland's Appalachian Spring, broadcast from the Library of Congress in honor of its premier performance there some 50 years earlier. Along the roadsides as city began to transition to countryside were prairie grasses, golden in autumn. The youthful roadside vegetation resonated with the music of spring's awakening, and a sense of the nation's promise.
Grasslands, meadows, shrublands--these are the younger landscapes, whose dynamic growth happens at our own height rather than far above. Their flowers and foliage also serve the insect community through the summer when deep forest has gone floristically silent. The aim here is to become more strategic and discerning about trees, to determine where they are precious, and where they might best be managed to serve ecological and aesthetic goals.
Posted by Steve Hiltner at Wednesday, January 27, 2021 3 comments:

On 11.11.2020 I presented a zoom talk on invasive species as part of a series of monthly talks sponsored by the Sierra Club of NJ--Central Group. The talk was entitled "Invasive Species and the Pandemic: Thinking of Nature as a Body." Thanks to Kip Cherry for inviting me to speak, to Chuck McEnroe for film editing, and to PrincetonTV for posting the talk online.

In the talk, really two talks in one, I tell how vanquishing aggressive invasive species has often been the first step towards creating special places for native diversity to flourish and people to gather. In the second part of the talk, I discuss how my experiences in climate change theater and land management led to the concept of nature as a body. 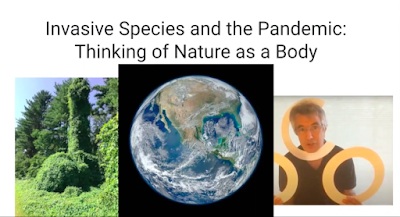 Posted by Steve Hiltner at Tuesday, January 19, 2021 No comments:

I've been posting some Herrontown Woods news at FOHW.org. There's the saga of the moving of the gazebo to the Princeton Botanical Art Garden (Gazebo Docks With Mother Ship), and a listing of the Friends of Herrontown Woods' accomplishments this past year. 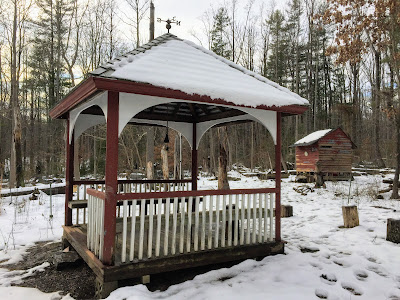 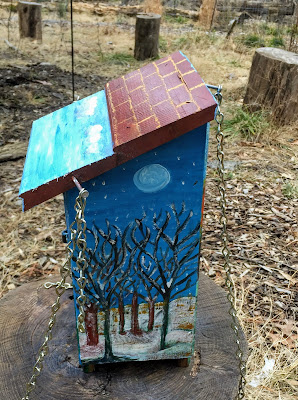 Some recent additions to the botanical art garden include a birdhouse painted with the four seasons, donated by artist Lisa Phox, 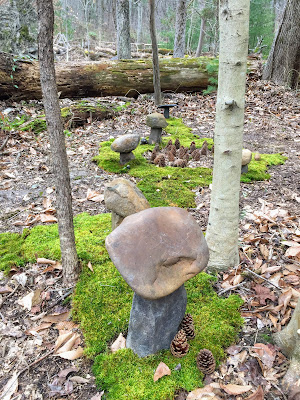 and a mushroom garden and pinecone forest created by Andrew and Rachelle. The moss comes from a particularly productive roof.
Regular workdays are from 10 to noon on Sunday mornings, for anyone who wants to come by the main parking lot off of Snowden Lane. 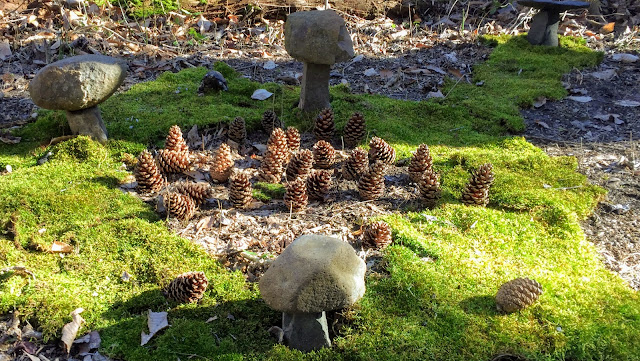 Posted by Steve Hiltner at Sunday, January 10, 2021 No comments: