'Tis the Season for Winter's Artistry

The unwrapped fig trees may be toast, or froast, after a frigid night, but the backyard "artist in residence" has been busy, transforming the rainwater in a 35 gallon tub that sits under a downspout. Putting the word "ice" in the search box for this blog brings up what could be an art exhibition of Winter's past work, e.g. I Like Ice, and Patterns in Carnegie Ice, 2015.

An effervescent toast to readers of Princeton Nature Notes, and may all the joys of nature be yours in the new year. 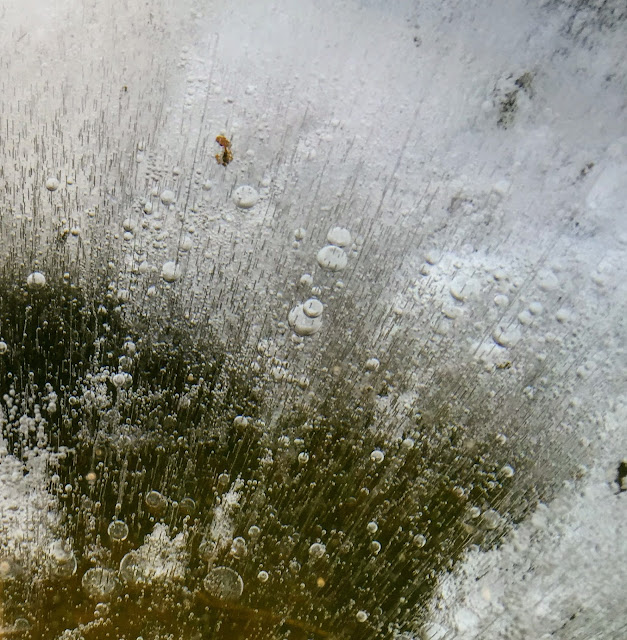 Posted by Steve Hiltner at Saturday, December 30, 2017 No comments:

A Couple Closeups of Backyard Birds from 2017

The hummingbirds like the mix of woodies and wildflowers in our backyard, using the trees to perch and the jewelweed and beebalm to feed. 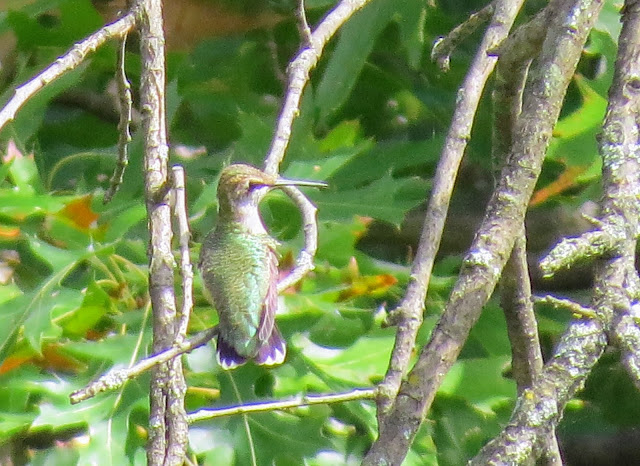 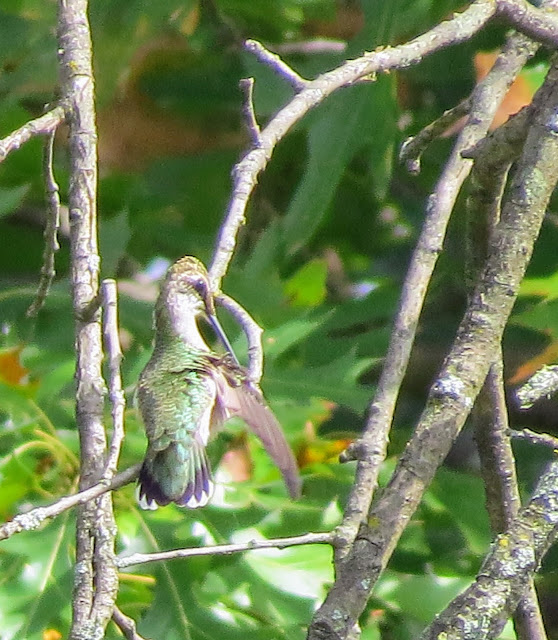 The cutleaf coneflowers extend the yellow of their flowers by attracting goldfinches, who seem to know no other mode than "enthused", as they acrobatically pluck unripe seeds from the bending stems, then fly off in small flocks or gangs, all a-chatter. 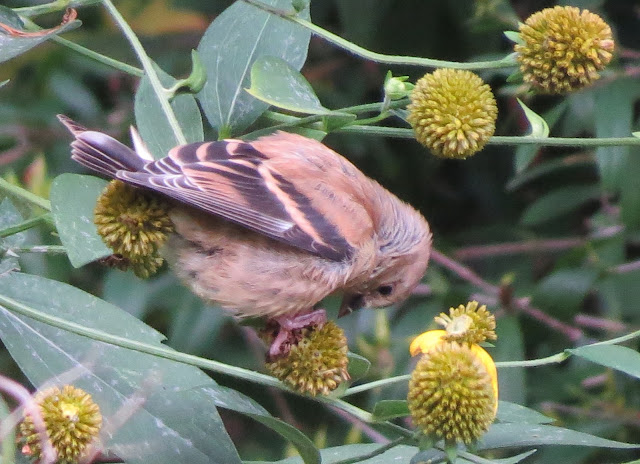 Posted by Steve Hiltner at Monday, December 25, 2017 No comments:

Winter Solstice, and a Farewell to Fall Color 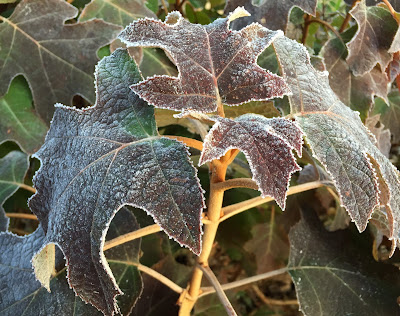 This being the winter equinox, one last tip of the camera to autumn, and a couple species that are particularly dynamic in the evolution of their fall color. Oak-leafed hydrangea has a broad color pallet in fall, from bright orange to this mottling of burgundy and something akin to purple. 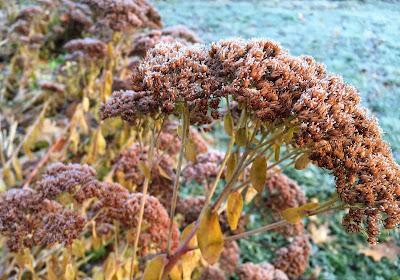 Showy stonecrop (Sedum spectabile), not native but not invasive either, evolves in the fall from green to pink to burgundy to chocolate. Extending its ornament into winter, its upright disks of flowers become hooded with snow. This year, they didn't make it to the chocolate stage, instead turning a rich bronze with contrasting yellow leaves below. 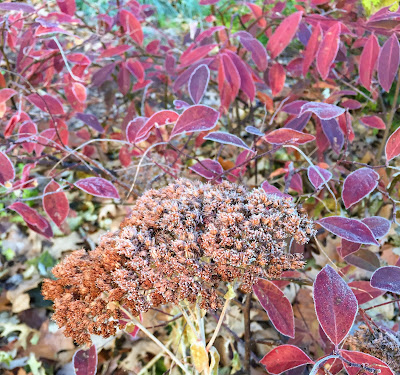 By chance, we planted the oak-leafed hydrangeas and Sedums with Virginia sweetspire, a native that also has a very rich and complementary fall color. All three of these are easy to propagate, in order to gradually expand on an initial planting.

The Aesthetics of Seed Collection 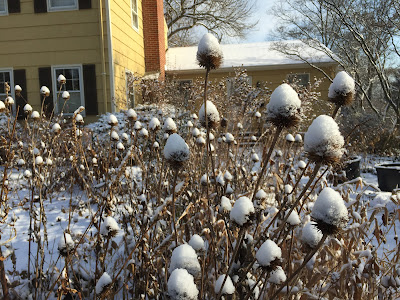 Leaving seedheads to stand in the garden through the winter can bring unexpected pleasure, like these snow-capped purple coneflowers. Any seeds not eaten by the goldfinches eventually fall to the ground and make new plants for transplanting elsewhere. 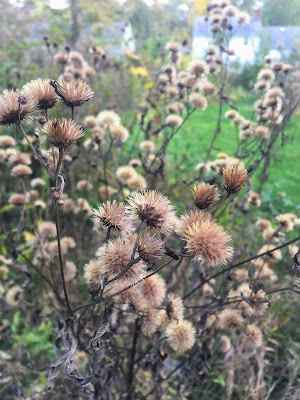 This year, though, I've been more organized about harvesting seed, the aim being to scatter it at a detention basin in Smoyer Park converted two years ago to a meadow, and at the "fallen pine forest" near the parking lot at Herrontown Woods, which Friends of Herrontown Woods volunteers have been clearing of invasives so sunlight can reach sun-loving species like this ironweed. 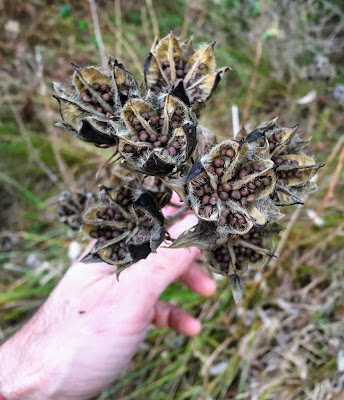 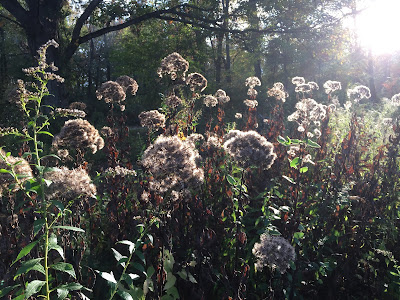 The utilitarian act of collection can bring unexpected moments of beauty in plants that a more intense management approach might have already cut down as part of fall cleanup. The cottony seedheads of hollow-stemmed Joe-Pye-Weed down along the canal take on different looks when backlit 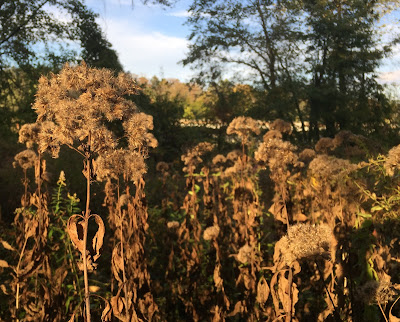 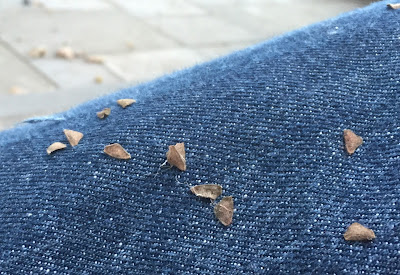 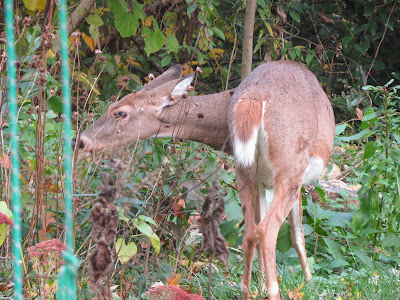 Funny. I didn't remember requesting landscape services. Deer hadn't shown up in our backyard since around 2005, when the birth control experiment was still underway and the females were looking elegant and very Princetonian with those identification cards hanging from their ears. Maybe it was taking refuge from hunters, or had had enough of rutting season. 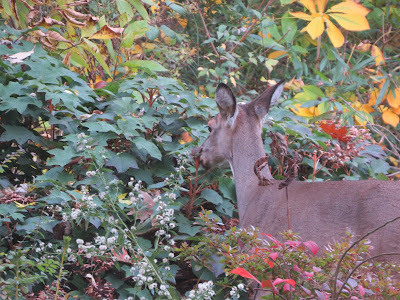 Deer are expert landscapers, trained from birth in the art of pruning. They wouldn't think of driving around town in those giant fossil fuel-consuming trucks that deploy gangs of mowers to quash nature's vertical ambitions. 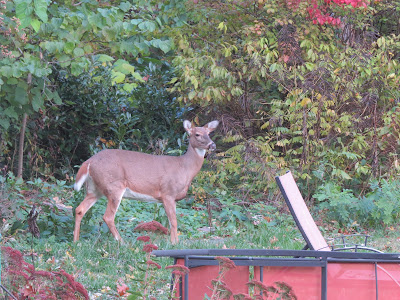 Deer are too considerate to make a racket with leaf blowers. And instead of releasing a cloud of fumes to sting your nose, they leave behind discrete contributions of fertilizer. They do the landscaping for free, but have a strong independent streak, refusing to adjust their methods to an owner's wishes. 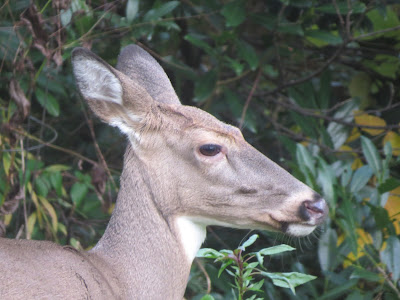 Deer are very sensitive. Even though I stood ten feet back from my bay window, I still had to freeze several times so as not to spook my subject. It's impressive how they are so observant and "in the moment"--a state of mind we too might more easily attain if we were further down the food chain. 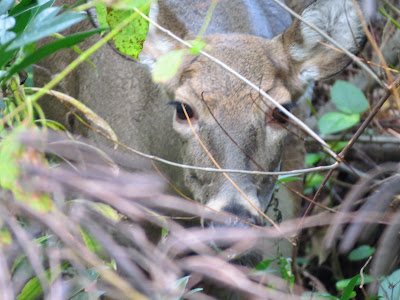 When I stepped outside to shoo it away, it didn't flee back over the fence but instead ducked behind some shrubbery in a back corner, waiting for my next move. 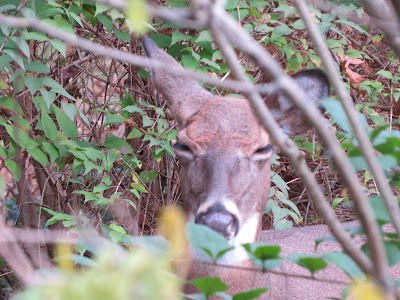 Once it realized I was not a threat, but instead just another among Princeton's backyard paparazzi, it regarded me with what appeared to be disdain.

No longer feared, I went back inside without finding out from where it came into the yard. 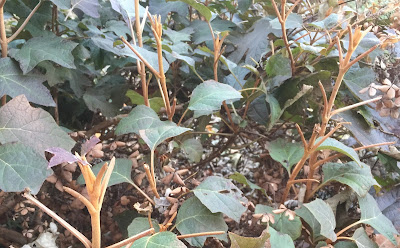 It was interesting, though, to watch it at work, browsing maybe ten leaves of our oak-leafed hydrangia before moving on to munch some grass. Though I've heard stories of deer wiping out a gardener's favorite plants overnight, my experience is that animals generally lack a thoroughness, whether it be browsers or predators.

My theory with deer is that their alertness to the potential for attack makes a patient devouring of one shrub less adaptive than a few nibbles here and there. And if much of what they eat has some level of toxicity, browsing can help reduce the risk of consuming too much of any particular toxin at any one time. Light browsing also promotes quick recover by the plants, as long as there aren't too many deer visiting the same plant. This suggests that deer could actually be good stewards, if their population was in balance with the landscape.
Posted by Steve Hiltner at Saturday, December 02, 2017 No comments: