Sometimes, maybe most of the time, natural takes work. This goes for both nature and human nature. Most people will look at this wet meadow, with its stand of ironweed set off by goldenrod in the distance, and think it burst spontaneously from the ground, fully formed. But that's not the case. 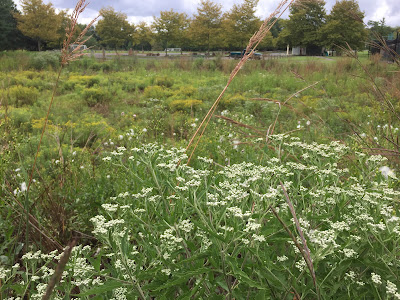 There are places where native diversity happens without intervention. I've known a few, where the original hydrology is intact, and introduced species have yet to invade, and fire is allowed to sweep through periodically and beneficially, as in ancient times, and the soil still holds within it the seeds to feed all the stages of succession, from field to shrubland to forest.
But not here in the middle of Smoyer Park, which had been a farm before it became ball fields. Plowed, regraded, planted with exotic turf grasses, this land had long since lost its native seed bank. Soil has a memory, as do we, composed of all the seeds that have fallen there and have yet to sprout. That memory is erased when plowed or bulldozed, as so much of America has been. Into the void will fall the seeds of mostly nonnative, weedy species that will lead to discouraging results for anyone who tries a romantic "just let it all grow" approach.
Bringing back natural, then, takes work. For an analogy, think of all the parenting needed to raise a child, all the emotions that need to be understood, the impulses that need to be steered in a healthy direction, all the parts of self that can get buried and forgotten along the way. There's plenty that can go wrong during that perilous journey to adulthood, and if it does, even more intervention is needed to regain that sense of comfort within one's own skin.
Nature has been profoundly traumatized, and yet many people somehow expect it to spring back without ongoing assistance. As with parenting, it's hard to have success in the absence of love. Most of the world's love and attention is directed somewhere other than towards nature, which explains why our suburban landscapes seldom receive more than custodial care--weekly visits of mow, blow, and go by crews indifferent to the land and its promise. 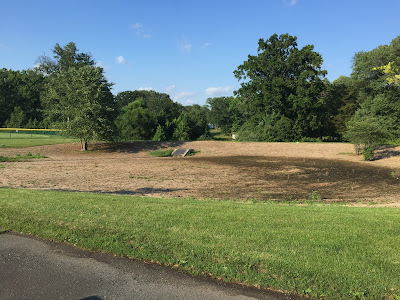 This photo shows what the wet meadow looked like just after it was planted with native grasses and wildflowers four years ago. Many would assume that nothing more was needed to create a healthy meadow, and would have walked away thinking "mission accomplished." But as with a baby, birth is really just the beginning. I looked upon the detention basin's bare expanse, seeds planted but yet to sprout, with an eye for all that could go right and all that could go wrong. Over time, it has taken only a couple hours of attention now and then to steer the planting in the right direction, but those few strategic hours, catching problems early, has made a big difference. In a sense, the planting resides within me. It is part of my internal calendar, rising into my thoughts often enough to prompt action.
Here is an account of the many kinds of plants that can make things go right or wrong when a detention basin is converted from exotic turfgrass to native meadow. (Click on the "read more" to continue.)
Read more »
Posted by Steve Hiltner at Thursday, October 22, 2020 No comments:

Fall is Burstin' Out All Over

After the heavy hitters of late summer are past--the Hibiscus, coneflowers, bonesets, et al--it's easy to think the season of native wildflowers is over, but this fall has been a surprise in the beauty and variety that nature held in reserve for these sweet autumn days.

One that's been a big hit at Herrontown Woods is Hearts-a-bustin', though I prefer to call it Hearts-a-burstin', because when I see it my heart does more burstin' than bustin'.
This native euonymus (E. americanus) would be a common shrub in the forest if not for the deer, who love to eat it, stem and all. They keep it browsed down to a couple inches high, so we had to take some of those and grow them out in cages so that visitors could see the ornamental seed capsules on the shrubs, one of which has risen to eight feet thus far. It helps, too, for the ornamental seed production, if it's growing in a clearing where the trees aren't hogging all the direct sunlight, like our Princeton Botanical Art Garden. 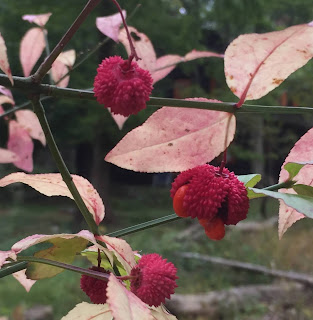 A little earlier in the fall when the capsules were just starting to open, you could see why it is also called strawberry bush. 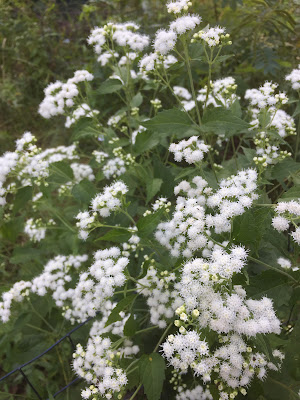 A solitary white snakeroot is growing near a Hearts-a-burstin' planted behind Veblen House. It can easily be confused with boneset and late-flowering thoroughwort. When I first moved to Princeton almost 20 years ago, white snakeroot was common in some areas, even weedy, being one of the few native wildflowers that deer didn't eat, but it seems much less common now. 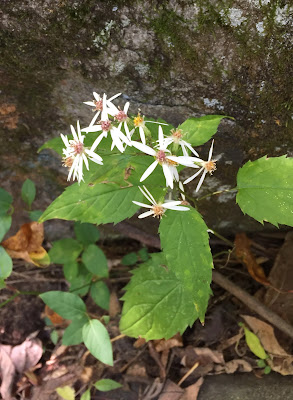 A few fall flowers in Herrontown Woods manage to bloom despite deep shade. Wood asters adorn some of the trails, 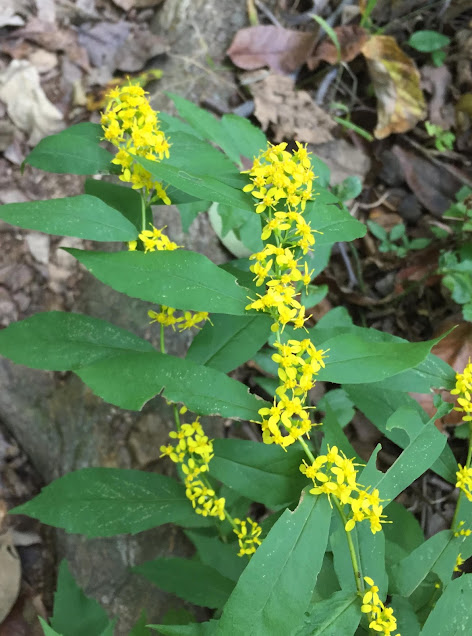 occasionally accompanied by a wreath goldenrod. 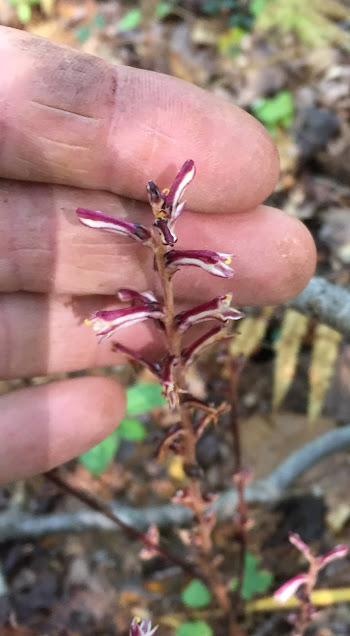 More subtle is beechdrops, which parasitizes beech tree roots rather than producing its own nourishment through photosynthesis. 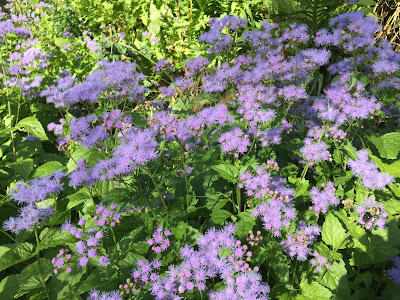 Along a busy street in a frontyard raingarden fed by runoff from the roof, blue mistflower blooms profusely for an extended period while staying low. 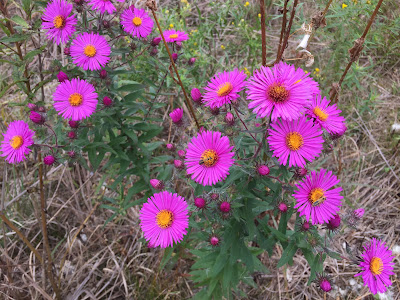 New England aster also brings color to the garden late in the season. 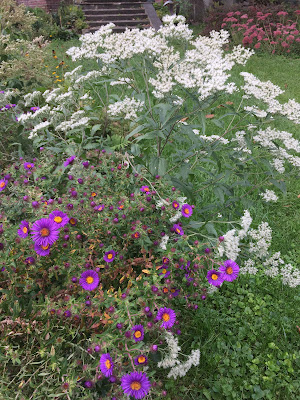 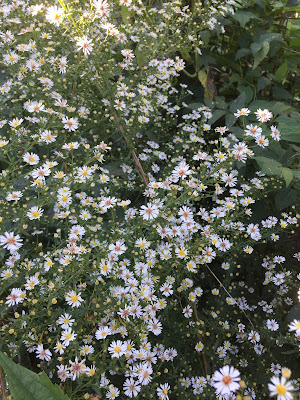 Another cloud of white late in the season comes from what I call frost aster. Because it can become too numerous, I would in the past make plans to enjoy the bloom, then cut it down and remove it before the seeds were released. But once it's bloomed, it quickly fades into the background of landscape and thought, foiling the best of intentions to control. 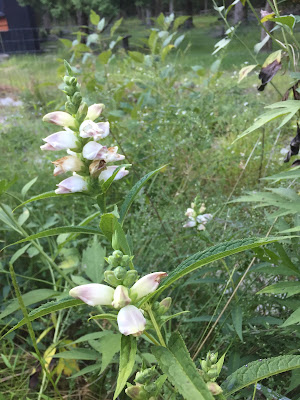 Turtlehead grows quietly and unobtrusively during the summer, bending around other plants to attain its tall, skinny, awkward state of maturity. The blooms make for a top-heavy look, but this year were solidly ornamental. 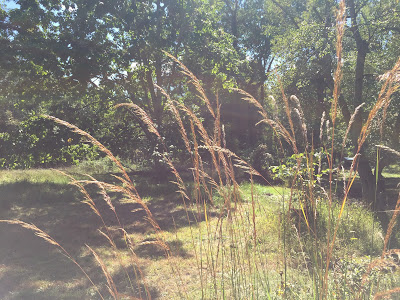 Indian grass is particularly pretty when growing in a distinctive clump, rather than crowded in a field. Like many prairie grasses, it responds beautifully to the wind. 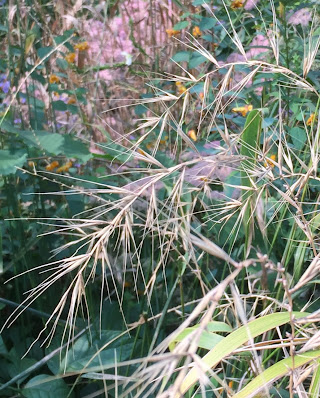 Bottlebrush grass is more of an understory grass, and unlike most native grasses it gets an early start in the spring. 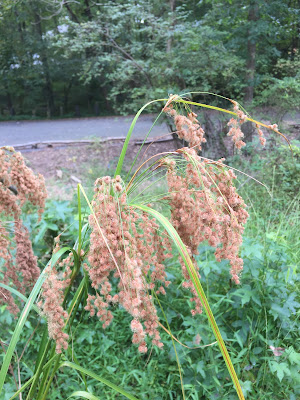 This one's called woolgrass, for its wooly appearance, but is actually a sedge, with edgy triangular stems. Unlike most native sedges that get an early start in the spring and move quickly to flower, woolgrass takes its time, gaining more height and slowly developing its inflorescence, which is ornamental at all stages, particularly when backlit. Though typically found growing on wet ground, it has been thriving through our wetter summers when planted upland as well, as here in the botanical garden at Herrontown Woods. 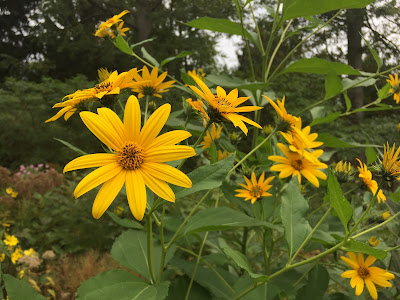 There are many species of native sunflower. They can make a big and very welcome show in the fall after other tall yellow wildflowers like cutleaf coneflower and cupplant have faded. A powerline right of way in the Sourlands preserve is one of the few places where they really show their stuff around here.
In North Carolina, they had names like "giant," "showy," "woodland," and a rare one called "Schweinitzii." I knew giant sunflower (Helianthus giganteus) from only one derelict patch growing along a roadside outside of town, and decided to do it and myself a favor by taking a tiny bit of the patch and planting it in my garden and in a sunny opening in a nature preserve I managed in town. As often happens, what seemed like a species on the brink in the wild turned out to be prolific and expansive in the garden.
The sunflower in the photo, though, is sunchoke, a sunflower that has long carried the name Jerusalem artichoke. Each year, I think I'll eat its tubers, which I don't, even though they have an appealing nutty flavor when eaten raw, and can work well in a stirfry. And each spring, I attempt to pull out every last sprout, tired of its aggressive underground spread. Then in the fall, longing for summer blooms to continue, I am thankful to find that my eradication efforts have once again failed to completely stem the tide.
These are some of the flowers that ease the transition from summer's glory to a palette of browns and grays. Let their colors, and the rich spectrum of autumn leaves, penetrate deep into your soul, to carry you through the winter to come.

Posted by Steve Hiltner at Monday, October 19, 2020 No comments:

Autumn in a Vase

As autumn has evolved, so have the bouquets that appear on counters and tables in our house. 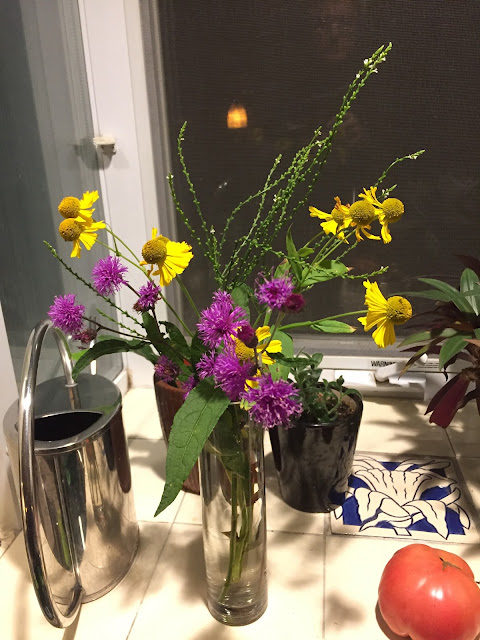 I'm content that the flowers in the front and back gardens feed the pollinators and produce some seed and beauty, but my wife invites them inside in various congregations. Plants have always been easier to photograph than people, and especially now, given that they don't need to social distance.

The yellow is autumn Helenium, and the long strands in the back are white vervain, which looks scraggly in the garden, with tiny white flowers barely noticeable, but in a vase takes on an artistic effect. 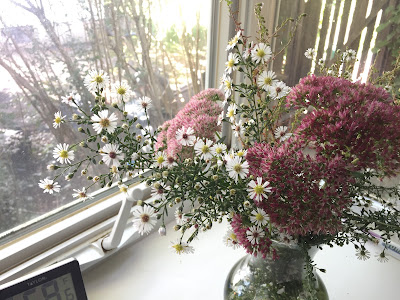 The frost asters in this bouquet (white) are weedy native that can get too numerous but has shown its glorious side this fall. The burgundy colored disks are a common stonecrop that's not native but has a very long ornamental trajectory, going from green to pink to burgundy to chocolate, and keeping its form through the winter. 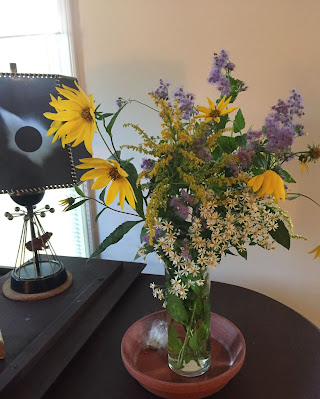 This one adds blue mistflower, goldenrod, and one of the many kinds of sunflowers. The sunflowers don't last very long in a vase. 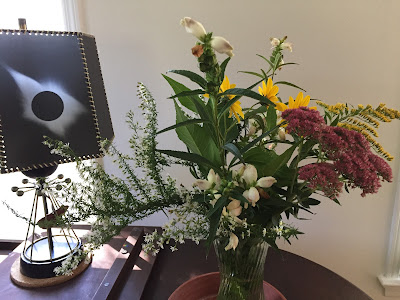 A week or two later, turtlehead got added in (white tubular flower). 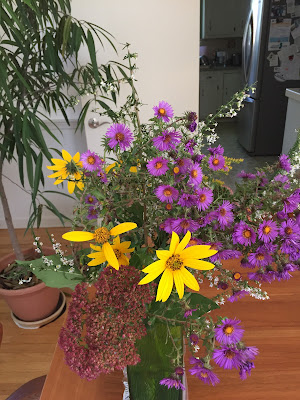 The pink/purple is New England Aster.

We have so many flowers in the garden that no matter how many end up in vases, there will still be enough to produce seed for new plantings elsewhere. 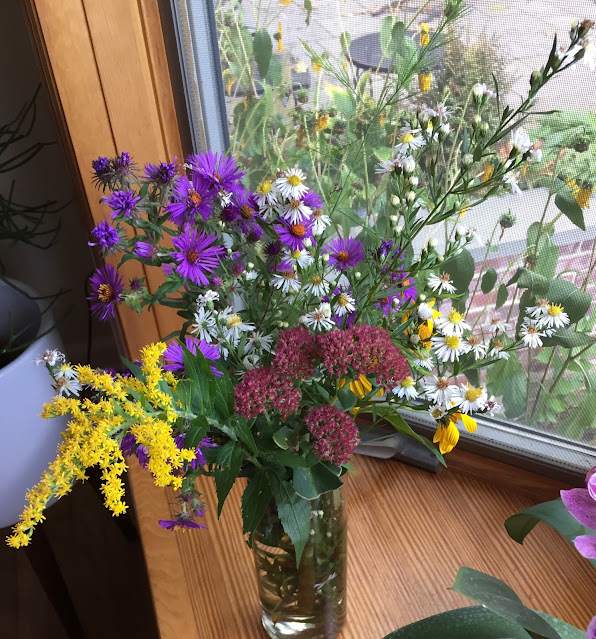 Posted by Steve Hiltner at Friday, October 09, 2020 No comments: