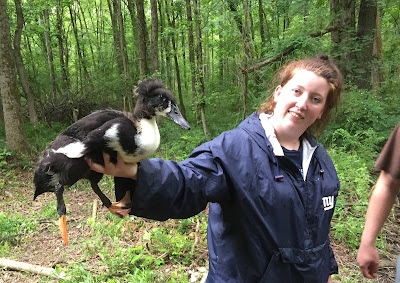 Young ducks are great for taking on nature hikes, imprinted as they are on their human caretaker. We had one come hiking up the trail recently to the Veblen House grounds while we were working on preparation for this Sunday's Veblen birthday gathering (come if you can).

A writeup on the duck, a magpie, is at this link.

Weeding a Rain Garden in June 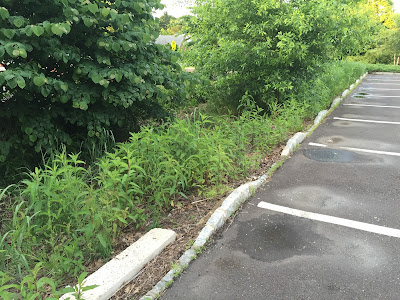 The curb at the Westminster Choir College parking lot looks like a serpent, dipping low to allow runoff to enter a constructed raingarden where pollutants and trash are filtered out, and the water feeds the plants. The raingarden does a lot of environmental work, so maybe someone could do some work to take care of it? Care of installed raingardens is not something most landscape companies do, and so the task falls to a local volunteer with the required knowledge, or the raingarden fills with weeds and gets mowed down and becomes yet more boring lawn.

In this scene, blue vervain grows in the spaces left by the expanding redbud and tupelo trees. 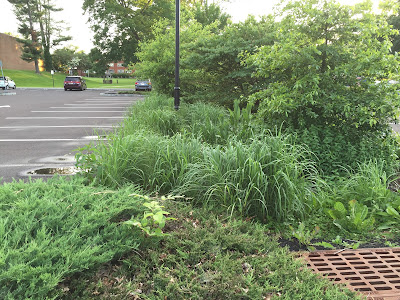 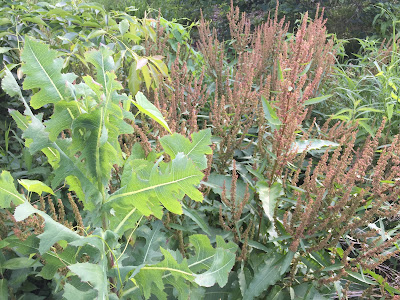 The raingarden is doing better than it was a couple years ago when I adopted it, but there are still weeds to easily undercut with a shovel, like wild lettuce and curly dock. 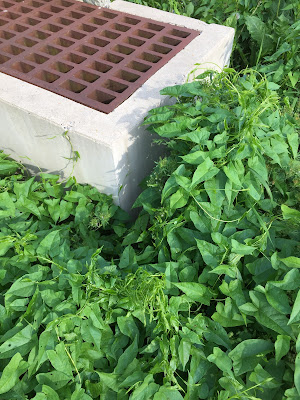 And bindweed to pull that would otherwise grow over everything. 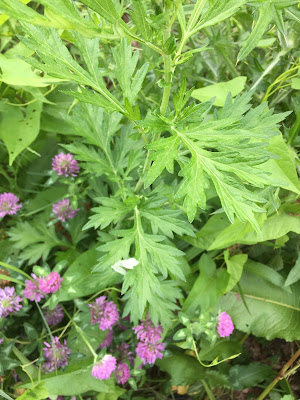 The mugwort was proactively dug out last year, but a few are still popping up. The pink in the photo is red clover, a non-invasive exotic that gets left in the mix. 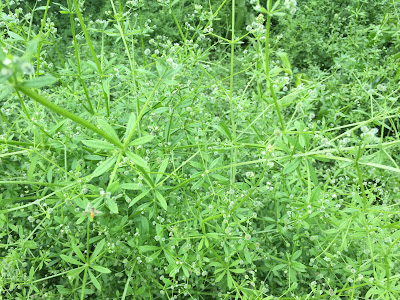 A bedstraw species smothered an area ten feet across before being pulled up. This may be the native stickywilly (Galium aparine), but was being way too aggressive for the setting. 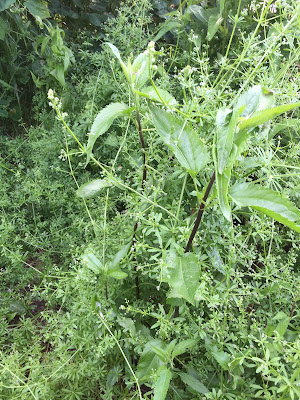 Here's the bindweed growing up and over a late-flowering thoroughwort that's worth protecting from aggression for its late summer flowers.

Not shown here is the crown vetch, another aggressive grow-over-everything weed. 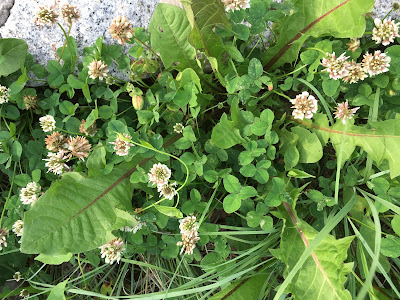 White clover and dandelions would require more time to weed than this volunteer has. 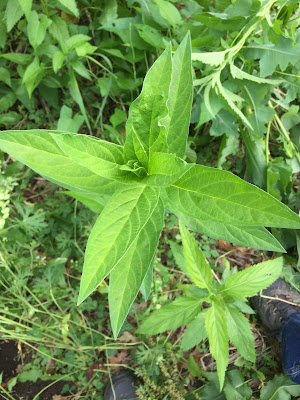 One nice discovery, not remembered from previous years, is a swamp milkweed, which would have little chance of growing if the aggressive weeds weren't controlled.

Some Native White Flowers of June 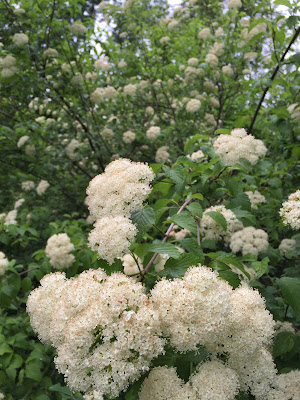 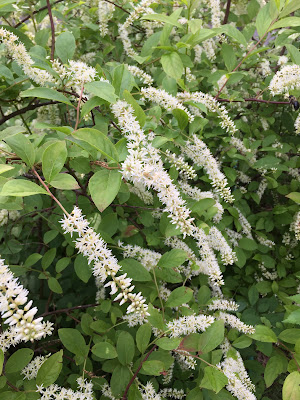 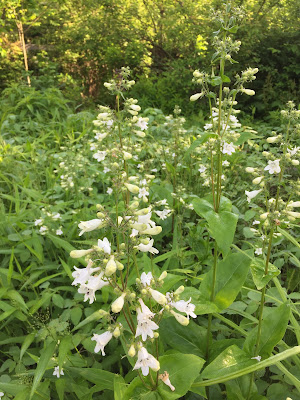 A new one in the yard, and on this blog: foxglove beardtongue (Penstemon digitalis) 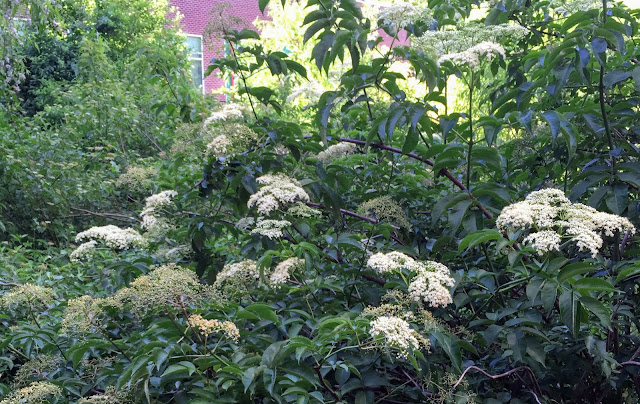 Mulberries and Other Forgotten Crops in a Buyaday World 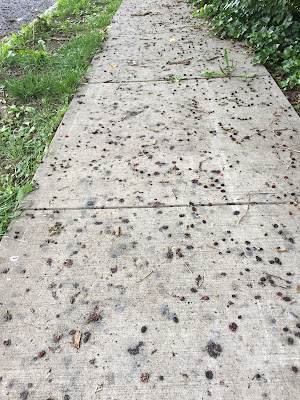 This time of year, if you see a sidewalk that looks like this, chances are you're walking under a mulberry tree. There are native red mulberries and Chinese white mulberries, the fruits of which are both tasty and largely ignored.

The fate of a bumper crop of strawberries in our backyard garden is not that much different. I munch on them as I pass by, but it's not easy to convince others in the family to try them, or to get myself to crouch down and do a thorough harvest. When relatively cheap fruit from who knows where floods the local supermarket year-round, seasonal local harvests lose their meaning. Much like the thought of scrutinizing a bus schedule when cars stand ready 24/7, it's hard to reorient to the periodic arrival of these small, variably shaped fruits growing outside. 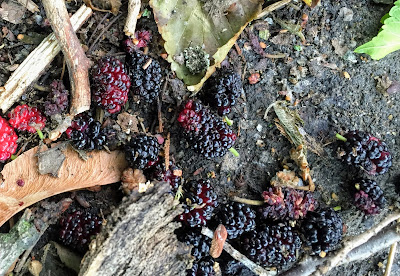 Of course, it's nice to have so much fruit easily available throughout the year, but ignored local bounty is just one more of the aberrations of an era awash in unethical fuels.

A carbon fee and dividend, as advocated for by the Citizens Climate Lobby, would not only help save a shared future, but also help us to rediscover the world around us, and all it has to give.
Posted by Steve Hiltner at Friday, June 15, 2018 1 comment:

Traveling recently to play a reunion concert with a jazz/latin band I used to perform with in Ann Arbor, MI, I stopped by the public library and saw this map on the wall, entitled "One World." I found it immediately calming, stripped as it was of the artificial boundaries between countries--boundaries that so often are depicted in terms of strife. 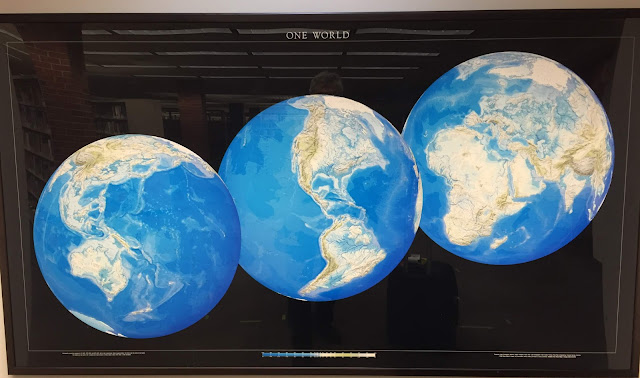 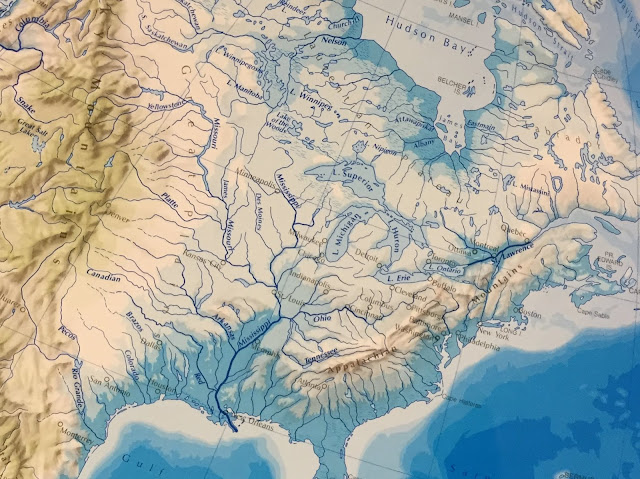 Here is Africa, freed of its political instability and suffering, the Zaire River running free, its tributaries like the thick fur on a gorilla. 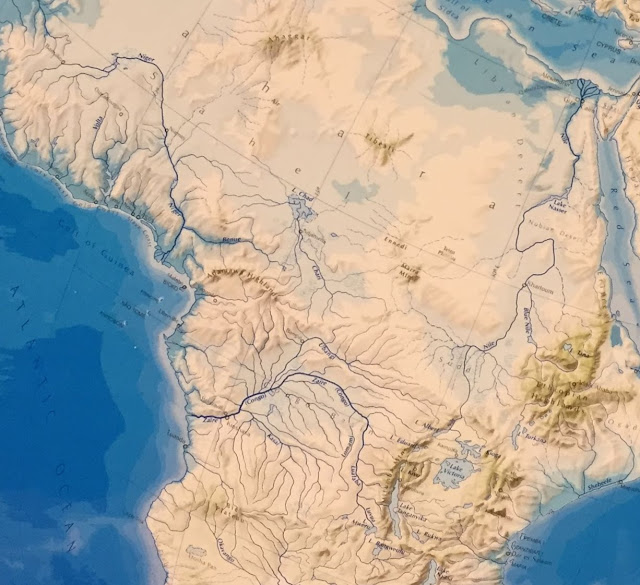 And South America, wrapped in blue, the mighty Amazon and Parana Rivers making the continent a coherent whole, relieved of the artificiality of political boundaries. If only human societies were knitted together with such natural beauty and coherence as the land beneath our feet. That's the sentiment I feel as I look at these maps, or play a tune the band has traditionally ended its performances with, also entitled "One World." 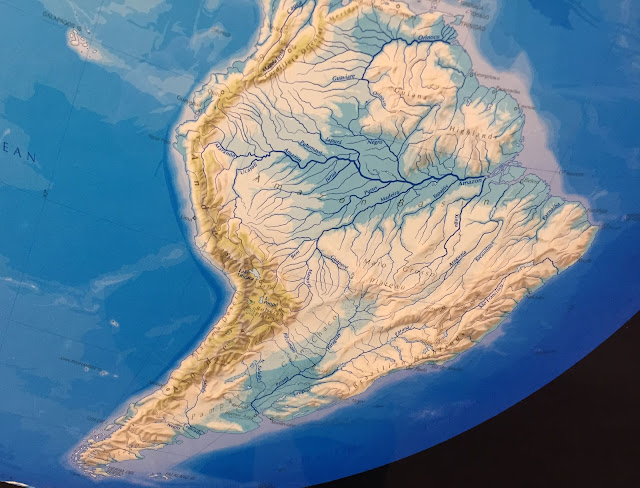 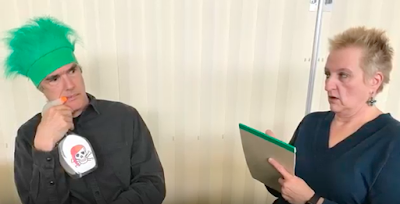 CLIMATE CABARET -- A free performance of original climate change theater and locally sourced "Sustainable Jazz" at the Labyrinth Bookstore in Princeton, 6pm on Wednesday, June 13. This performance will feature climate-adapted versions of Shakespeare, The King's Speech, a song from the Wizard of Oz, along with theatrical sketches ranging from comic to poignant. A suburban lawn undergoes therapy for recurring feelings of emptiness and chemical addiction, and for the first time, an environmentalist house cat will share her thoughts and concerns about earth and the human race. Actors: Cheryl Jones, Basha Parmet, Kitty Getlik, Fred Dennehy, Steve Hiltner. With Phil Orr, piano, and Steve Hiltner, sax/clarinet.

SUSTAINABLE JAZZ -- Another free show, this one hosted by the Princeton Public Library, from 2-3pm on Sunday, June 17. Steve Hiltner and the extraordinary pianist Phil Orr will perform Steve's original jazz compositions from their upcoming album. Styles range from straight-ahead jazz to funk, rumba and tango. Check out Phil's many other creative collaborations, including the ongoing Jazz On Broad series in Hopewell, at http://philiporrmusician.com/.

VIDEO PREMIER – Farming in the Millstone Valley: Past and Present
--to be held at the Princeton Garden Theatre at 7:30 PM Tuesday June 12th, 2018. The viewing will be followed by a panel discussion. A preview of the video was shown at Eno Terra, but the final version has many new images. The video was made by the Millstone Valley Preservation Coalition (MVPC), in association with the Van Harlingen Historical Society. Kingston and the Princeton Nurseries Kingston Site are included in the video. 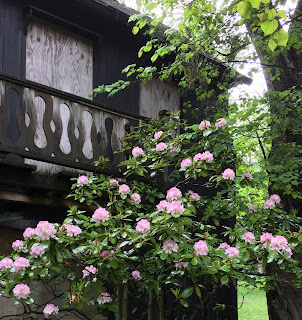 BIRTHDAY PARTY FOR OSWALD VEBLEN -- An outdoor picnic event at Herrontown Woods in celebration of Oswald Veblen's 138th birthday (still going strong) is being planned for 2pm Sunday, June 24. Oswald and Elizabeth Veblen donated Princeton's first dedicated nature preserve, Herrontown Woods, in 1957. The Friends of Herrontown Woods have been caring for this wonderful legacy, and researching the fascinating history of the Veblen House and farm cottage. Veblen was featured recently in a Princeton Alumni Weekly article, entitled "The Power of Small Numbers." Time to throw him a party. More details will be posted when available, at FOHW.org.