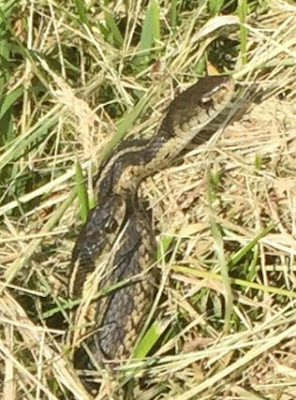 While walking the property we nearly stepped on a couple snakes out mating in their field. From what I've heard and read, there are venemous snakes in northern and southern New Jersey, but not here in the central region. This one, or two, look like something a botanist would call a garter snake. I hope they didn't mind too much our human curiosity. 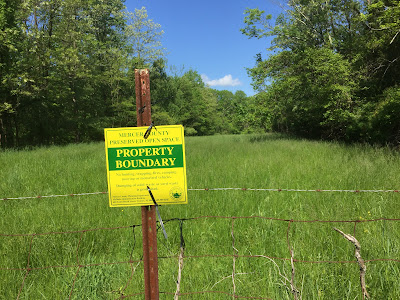 Up until a couple years ago the land was owned by John Powell, who was manager of the Weller farm before it became Smoyer Park. Each year on his six remaining acres of pasture, John would grow a couple head of cattle, a picturesque reminder of when Jac Weller had a real farm across the road, with bulls that would occasionally escape, prompting a surprised neighbor to call the farm to report that there was a bull in the backyard. 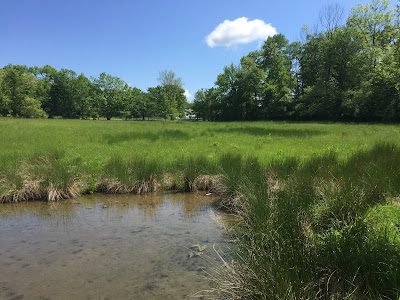 The 4.5 preserved acres are as close to a clean slate as we get in Princeton. Do we keep it as pasture with mostly nonnative grasses? Or do we shift it to native prairie grasses and wet meadow wildflowers? Periodic mowing would be needed in either case. Letting it grow up in trees would reduce even further the places where shade-intolerant plant species can grow. Or can it still perform some farm-like function? I showed NOFA-NJ (Northeast Organic Farmers' Association) the site years ago, including the adjacent farmhouse, without success. 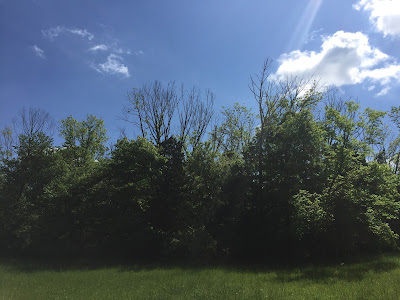 Meanwhile, we continue our travel through the 21st century. Ash trees on the neighbor's property succumb to Emerald Ash Borer, 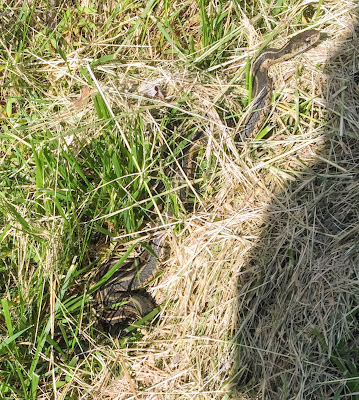 while garter snakes know what to do with a field, even if we do not. 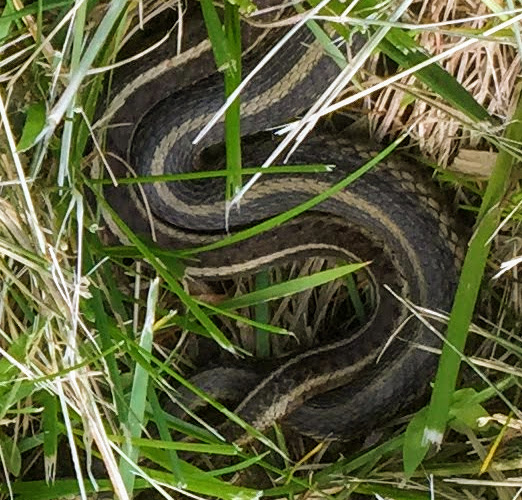 Balance and Imbalance in Nature

Here are two examples of insects eating leaves at Herrontown Woods. One is sustaining balance, while the other threatens the survival of beloved native Viburnums. Why is one insect beneficial, and the other highly destructive? The story begins with the sensitive fern, a beautiful native that graces local wetlands and gardens. 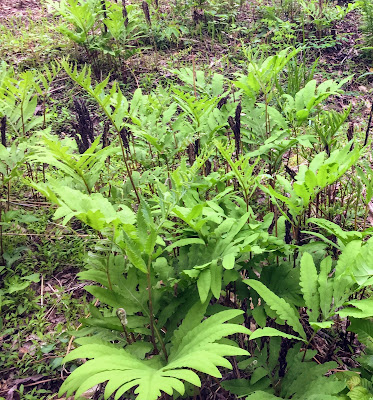 Though we tend to think of ferns as delicate, the sensitive fern is a tough, resilient plant in moist ground, sometimes even showing expansionist tendencies in a garden. The "sensitive" in the name refers primarily to its susceptibility to first frost in the fall.

Typically, the aggressiveness of native plants has been countered through the co-evolution over many millenia of other organisms that can eat them. Any plant that becomes super abundant will in turn provide abundant reward for any organism that develops a capacity to eat it, thereby bringing its population back into balance with other species. That co-evolution takes time, given that plants are brilliant chemists, with many chemical and physical defenses that must be overcome by any would-be consumer.

Since deer generally don't eat sensitive fern and our summers are getting wetter, what might keep it in check? 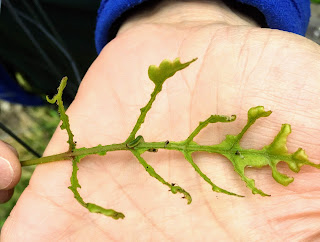 Recently, while weeding the new botanical garden at Herrontown Woods, I found some young sensitive ferns stripped down to their leaf veins. Sensitive ferns, it turns out, are eaten by several kinds of insects, each attacking a different part of the plant. 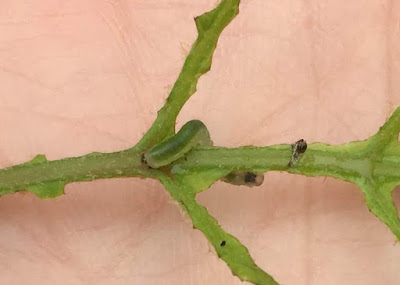 The culprit here was a little green caterpillar, most likely a sawfly larva.

Presumably, because I haven't heard of any new, introduced insect ravaging ferns, this insect evolved long ago a capacity to digest and detoxify the sensitive fern's chemical defenses. Any predator that consumes all of its prey will not itself survive, so relationships tend to evolve between predator and prey that are mutually sustaining, and therefore promote balance in nature.

The damage inflicted by the caterpillar is therefore reassuring. 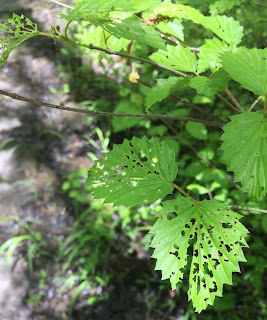 By contrast, the insect damage on this leaf, encountered on the red trail leading up to the Veblen Cottage, was not at all reassuring. It is instead evidence of a radical change coming to Princeton's nature preserves that could largely eliminate several important shrub species from our woodlands and gardens. The leaf is of arrowwood Viburnum, one of three Viburnum species that up to now have contributed flowers, berries, and fall foliage to Herrontown Woods' ecological functionality and beauty.

Their continued presence is now threatened by an introduced species, the Viburnum leaf beetle. Past writings about this invasive beetle on this blog can be found at this link. Arrowwood Viburnum tends to be the first to succumb, followed by mapleleaf Viburnum and blackhaw Viburnum. The insect has the ability to completely skeletonize a shrub. Multiple attacks can ultimately exhaust the plant's reserve energy. I saw a skeletonized Viburnum in Pittsburgh some years ago. Its complete stripping of the plant's foliage was in contrast to a native predator that would tend to do only partial damage, leaving most of the plant alone.

Below, from a Cornell University website, is one potential scenario. It suggests that there will be an initial wave of destruction as the Viburnum leaf beetle eats through all the susceptible Viburnums, after which the insect's population will crash, and become a minor pest from thereon, allowing the susceptible species to grow once again. Even if this were to prove true, the introduced pest represents one more shock to the system.


"The viburnum leaf beetle hit us hard in the Rochester area about 15 years ago. During those first few years in which the beetle population peaked most of the susceptible native species like arrowwood, that were growing in wooded areas, were killed. Some landscape plants succumbed to the defoliation then too.

"At that time I would not have recommend planting a susceptible species like the Cranberry bush viburnum. Now however the populations of the beetles are down significantly and it is safe for us to plant species again like cranberry bush and arrowwood viburnums. They’ll get a little bit of damage but nothing lethal.

"Why did the populations go down? It seems with all the very susceptible native plants that were around initially allowed the populations to reach unnaturally high levels and the beetles moved into landscapes annually. With those food sources gone the populations declined. Also, and maybe more importantly, predator insects, and nematodes that affect the larva in the soil have built up and found the Viburnum leaf beetle as a food source!