The Joy of Ephemeral Creeks

The October 28 nature walk, like those before it, was preceded by a spectacular dumping of rain that lasted long enough to insure no attendance, then stopped minutes before the scheduled start. I showed up to lead the nature walk anyway, though I was sure the weather had discouraged any and all. The big draw was the ephemeral creeks, one of which, flowing briskly alongside Valley Road, swelling into ponds where the leafpiles formed dams, nearly stalled out my car. The rain stopped right around 9am, and the surprisingly balmy mistyness had an exhilarating effect, as did the findings of an hour and a half exploring the woods of Community Park North. 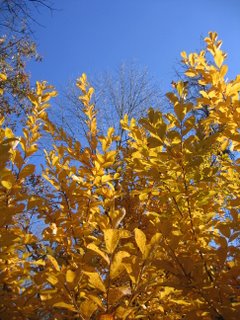 The parking lot serves as the headwaters of a fine ephemeral creeklet that during and after a good rain heads off through the woods, past exotic Asian Photinia (photo) and native spicebush, then down through a grove of swamp white oaks. 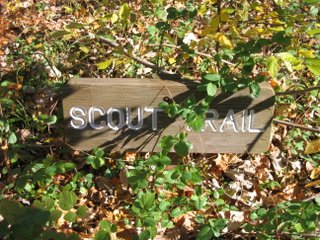 The various trails that used to lead into this area, which also hosts some nice, squishy sedge meadow openings and a view back across Pettoranello Gardens, are mostly defunct. I progressed through the tangle of exotic shrubs only with the help of a trusty pair of hand clippers. 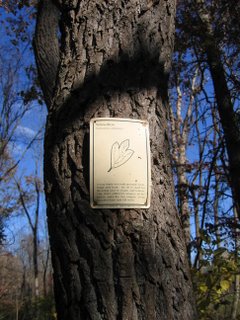 Some of the trees announce their identities, and give clues as to where the trails used to be. 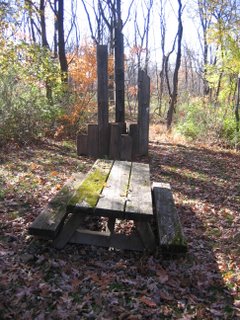 Very sturdy picnic tables that look like partially sunken battleships, and some totem-pole-shaped climbing structures surrounded by invasive thorn bushes, add a lost culture kind of feel.
Across the branch of Mountain Brook, another ephemeral creek flowed down through the evergreen forest. Nothing grows under the thick shade and pine needle mulch except a few patches of Japanese stiltgrass, so it's one of the few woods around where one can easily get off the trail and head cross-country. The clear views through the forest, and a group of five deer off in the distance, gave the place an old Disney movie feel, though in this updated version the deer have eaten all the wildflowers.
A day later, the creeks would be dry and the balmy temperatures gone. I was glad to have witnessed one of the woods' more unusual moods. I didn't make it over to the boardwalk, though I bet it had some nice creeks flowing there as well. The walk will be rescheduled.