Build the habitat and they will come.

Midday on November 15, our dog Leo barked at the backyard from his perch next to the bay window. I always find his sharp bark irritating, but I soon thanked him for drawing my eye to the window just in time to see a great blue heron flying up and out of our backyard. I had been waiting for this moment since digging the miniponds a year ago. Great Blue Herons are glamorous symbols of wetlands, but they haven't let it go to their heads. They are not above showing up in someone's less than sprawling backyard and taking a peek and a poke at a Puddle With An Attitude. The miniponds have been attracting lots of birds, but the heron's visits over two days mean that our backyard habitat is now Heron-Certified.

I'd like to think it was impressed with all the native wetland plants I had added, but truth be told, a great blue heron would visit a bathtub in a sea of turfgrass if it thought there might be a fish to be had. As it happened, we were wondering what to do with the goldfish that had grown sizeable over the summer and given birth to another generation. Would they make it through the winter, or should we go to the trouble of keeping them in an aquarium until spring? The heron provided an elegant, flattering and educational solution, though I doubt the fish were happy.

Below are some photos--not the best, since they were taken through a window, but seeing is believing. In the second photo, the heron is perched on the neighbor's roof, probably digesting its lunch before heading off to the next fishing hole. 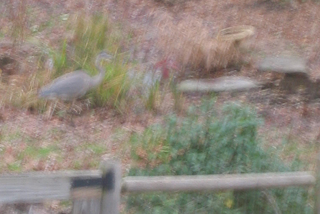 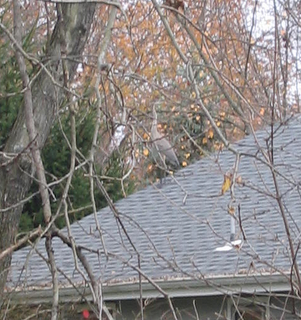