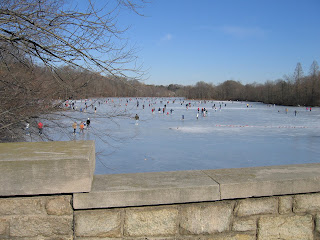 Princeton is now hosting a long-awaited Winter in Residence program. Though scheduled to begin back in December, programming did not get underway until February, due to the increasingly temperamental behavior of the guest artist in recent years. Last year, Winter stormed out of Princeton for most of January, in what now seems a mild rebellion compared to this year's long-delayed appearance.

There's no doubt that Winter has been struggling in recent years. Its greatest masterworks--the glaciers and the polar ice caps--have been washing into the sea. Its whimsical craftings of frost on windows are few and far between. Even Winter's riffs on snowflakes, billions at a time and no two the same, are less common and quickly sullied by traffic. It's understandable that Winter would be ever more reclusive--embarrassed by its dwindling powers, angry and depressed at the pellmell destruction of its greatest works, weakened from breathing too much CO2. In its place, for months at a time, has been a season without a name, neither spring nor fall, comfortable yet discomforting--a void, an end with no consequent beginning, as if we were living within a season's empty shell.

All this was for the time-being forgotten, though, when the arctic air blew in and Winter, quietly working in its favorite and most deceptively magical medium, transformed a pretty but otherwise cold and unwelcoming lake into a dancefloor, public square and sports arena. Working without a budget or publicity, nor any tools beyond serendipity and physics, Winter drew thousands of local residents to a spontaneous community festival down at Carnegie Lake. 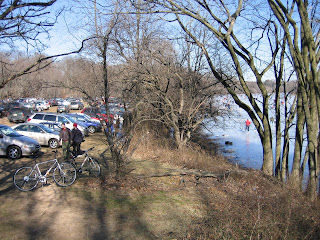 Rows of cars filled the field; skaters of all abilities plied the wondrously smooth ice. One skater propelled himself with a homemade sail. A baby took to the ice in a baby carriage. Along with some pickup hockey games, there was a slippery, slidey game of soccer played slow-motion in boots.

Word had it that the last time such magic was worked on the lake was twelve years ago. We all savored the experience, not knowing when it might happen again. 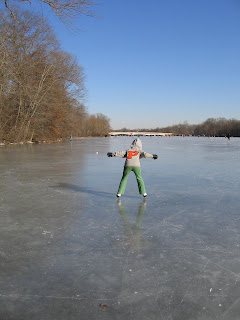