Going After the Ivy

Springtime in an ivy league town, and the warming breezes jog some deep impulse to take action. To live with English Ivy is to live in perpetual ambivalence. Pretty green leaves, low maintenance, but how long will the free world stand idly by as it spreads its insidious conformity? For me, it was the sight of spring bulbs struggling to rise through the smothering green wave that gave the needed extra motivation. A heavy rain had softened the soil, and there was still time to liberate the spring bulbs before they bloomed. The long period of preparatory procrastination had come to an end.

Below is a description of one approach, designed to give hope to beleagured gardeners everywhere. Wear gloves, long sleaves in case there's any poison ivy mixed in, and keep a pair of hand pruners in the back pocket. Remember, if persistence were the measure, you would be as David before Goliath. But the use of a shovel, applied with a mixture of finesse and strategic force, will send the green giant reeling back on its heals. 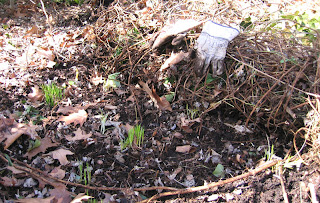 My first approach was to pull the thick mat of ivy back, like rolling up a carpet. The gloves are where my hands would be if I wasn't taking a break to get some photos for this blog. (Anyone remember Tom Lehrer's song, "I hold your hand in mine"?)
The hand pruners come in handy if some of the ivy stems don't pull out of the ground.
Note the clusters of bulbs being liberated from the forces of bullish conformity. 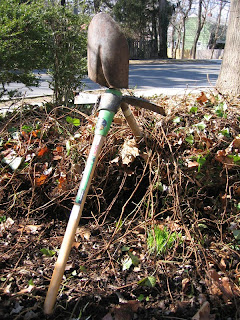 The above method, while effective, caused my lower back to strike up a sentimental conversation about past strains and such. Being somewhat more highly evolved than the ivy, I decided to use more brain and less pulling force, which led to the Reverse Shovel technique exemplified on your left. The pickax is only there because I didn't have anyone to hold the shovel up for the photo, so leave the pickax in the garage. Starting at the leading edge of the ivy, slip the shovel along the ground beneath the ivy, then raise the end of the shovel handle, Iwo Jima-like, using your shoulder to push it up. Any strands still connected to the ground can be pulled out or clipped off. 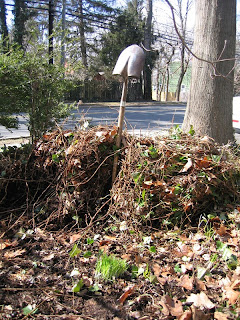 The ivy should come free of the ground as you push, as in the photo on the left. Rolling the ivy back on itself, you end up with a pile of ivy that can be left to smother itself until the next time you summon the motivation to push the green wave further back.

Followup was much less than I had expected. Surprisingly, not much ivy sprouts back up in the cleared area, and can be easily pulled. 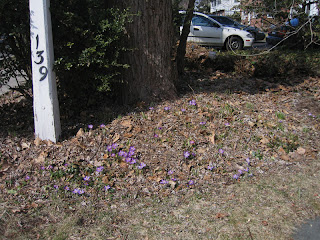 This is what it looks like when you're done.

There are other methods. But this one worked for me on a sunny day in March.
Posted by Stephen Hiltner at Monday, March 05, 2007