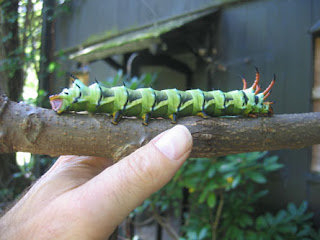 It's enough to make one think that all of one's actions, no matter how seemingly scattered, are somehow connected. If I hadn't taken up the cause of saving the Veblen House in Herrontown Woods, I would never have noticed a giant caterpillar crawling on a walnut branch in front of the house.

Not knowing what it was, I googled "giant horned caterpillar", and immediately found the name. 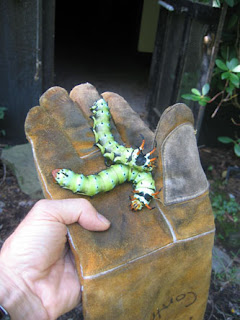 Mark Johnson, Princeton's animal control officer, was on the scene, primarily to tell us how to get rid of a raccoon, two squirrels and a flying squirrel that have found the boarded up house to their liking. He said the lighter colored caterpillar is probably a female. The big, thick glove is for handling animals with teeth. The caterpillars, scary as they look, proved to be harmless.

"They are enormous in size, being five to six inches long and nearly 3/4-inch in diameter. They feed for a period of 37 to 42 days on the leaves of hickory, walnut, butternut, pecan, ash, lilac, persimmon, sycamore, sumac and sweet gum. Larvae mature in late summer, wandering around searching for a place to burrow underground to pupate. Overwintering occurs in the pupal stage.

The moth (Royal Walnut Moth) has a wingspan of five to six inches and is seen in midsummer. It has a long body covered with orange yellow hair. The forewings are gray with orange veins and yellow spots. The hindwings are primarily orange with scattered yellow patches."