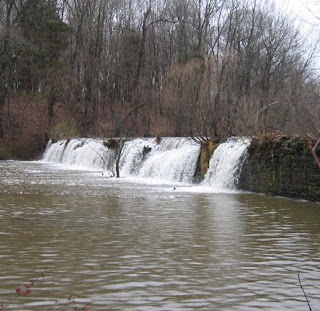 For many years, Princeton township has been making plans to restore the historic dams at Mountain Lakes, which were originally built to collect ice for Princeton's ice boxes in the days before refrigerators. 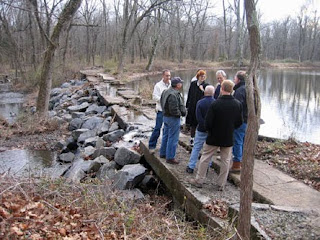 Over the past century, the two dams have weakened, and the lakes have filled in with sediment. The upper lake, for instance, was originally 7 feet deep, but now has only a foot of water.

Only in the past year, when an anonymous donor offered to fund the $2 million project, has the restoration moved beyond the planning stage.In the photo, township engineers and historians meet on the lower spillway to discuss details of the restoration plan. The large boulders piled against the dam are temporary reinforcement for the buckling spillway. 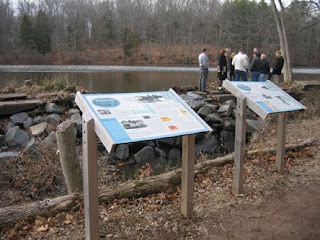 Interpretive signs tell the history of the ice business that once included two 3-story barns to store blocks of ice just below the dam. Hay from nearby fields was used to insulate the barns, which could keep ice for up to two years.

The restoration will include a dredging of the two lakes, and is scheduled to begin in May, 2010.