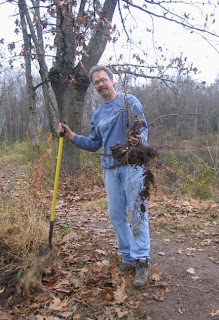 Have a spicebush! As part of a planting project around Mountain Lakes House, Friends of Princeton Open Space board member Tim Patrick-Miller led a plant rescue on the old lower dam at Mountain Lakes. The dam will be enlarged this coming year, burying all existing vegetation. All told, we rescued five spicebush shrubs and four swamp rose. 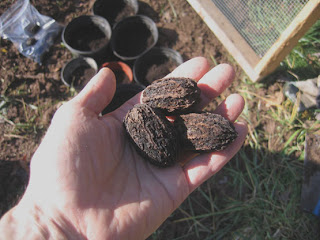 In another project, initiated by Princeton resident Bill Sachs, we planted 20 butternut seeds outdoors, then covered them with metal screening to prevent pillaging by squirrels.

The butternut is a rare native tree threatened by an imported canker disease that is reducing their numbers even further. Bill, who edits the Nutshell, a newsletter for the Northern Nutgrowers Association, has been scouting out where these trees can still be found in Princeton. Until we get DNA analysis, we won't know whether the trees found are the native butternut, or a hybrid with an imported species.