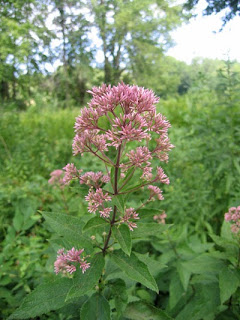 About a dozen of us congregated this past Saturday morning for a nature walk along the canal towpath, using our collective wisdom to interpret the myriad sorts of plant life we encountered.

The leaves of Ailanthus and sweet gum were crumpled, and words sought to characterize their aroma. Great respect was given to poison ivy, where it had climbed trees and sent out lateral branches terminating with this year's crop of berries.

I pointed out the wings on winged sumac, the flowers on ironweed, cutleaf coneflower, hibiscus and JoePyeWeed (first photo), and the switchgrass that George W. Bush embraced in one of his State of the Onion speeches as the biofuel of the future. 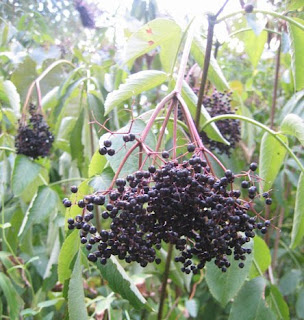 Where the land between the canal and Carnegie Lake widens towards Harrison Street, we gazed out across rich undergrowth flourishing beneath scattered oaks, and talked of how low-level fire--the Indian's horticultural tool-of-choice--once fashioned landscapes much like this. The open canopy allows native shrubs like elderberry (photo) to thrive. We (which is to say my parents) used to make pies and jelly out of these. Sometimes the birds pick them clean, sometimes they don't. Looks like a good crop this year. 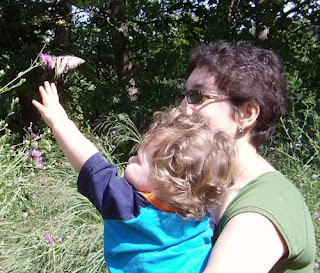 The abundant tiger swallowtail butterflies were out and about, drawing the attention of our youngest participant.

When asked what a certain 3 foot tall plant was, I took a closer look and found that it was a collage of four species all tangled up in their scramble for sunlight. Such is the diversity when you put water and sun together. 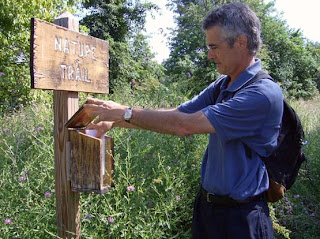 And, in a solemn event at the Harrison Street end of the walk, Jim Manganero photographed my ceremonial "finally getting around to putting some plant info in the brochure box that a boy scout so nicely built several years ago." I guess I wanted to make sure the box was going to withstand the test of time before putting it to use.

Thanks also to Jim for the previous "To touch a butterfly" photo.