Let Them Be Cake?

Back in the early 90's, I had two jobs--taking care of indoor plants at a university, and playing weekends in a wedding band. Sometimes the band would play at large surburban reception hall complexes that serviced multiple wedding receptions simultaneously. During breaks, we'd walk the hallways, ornamented increasingly with plastic plants, and note how wedding parties were trending towards hiring D.J.s instead of bands. Real plants and musicians were steadily being replaced by imitations. 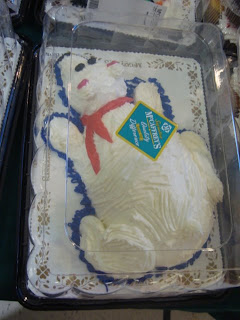 Given that indoor plants, and saxophonists playing Top 40 pop/rock, are seriously displaced from their preferred habitats, their phasing out cannot be compared to the rapid changes in habitat many native species are up against.

Something about this polar bear, 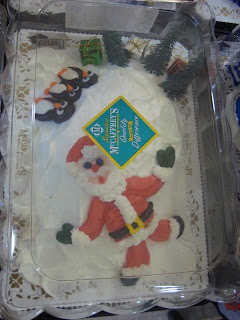 these penguins, and the Santa, encased like museum displays, made me wonder if and when the penguins of the southern seas, and the polar bears of the north, will join Santa in the world of make believe and memory. It wasn't a very sweet thought to mix with all that frosting.

The next day, part of the answer was provided by Stephanie Pfirman of Columbia University in a fascinating talk at Princeton University entitled "Managing Arctic Sea Ice".

The quick answer, for those in a hurry, appears to be that polar bear numbers will be decimated in coming decades, but that a residual population might survive through most of the century in an area just north of Greenland, where computer models suggest summer sea ice will linger. Her talk did not focus on penguins, though she did say that one colony of Emperor penguins at the South Pole has already disappeared, for reasons linked to changing climate. Changes at the South Pole are more subtle thus far than in the Arctic. Here is fuller account of her talk:

She began in an uncharacteristic way for a scientist. Back in 1992, when scientists assumed that the big impacts of climate change were 100 years off, she had a dream in which she was flying over the arctic, and all the ice was gone.

Her dream is looking prescient. It is now believed that most of the summer ice in the Arctic Ocean will be gone by 2035, and with it most of the habitat for polar bears and the ringed seals they feed on. Already, the diminishing summer sea ice has triggered polar bear cannibalism and interbreeding with grizzlies.

They still expect the Arctic Ocean to freeze over in winter, but the ice cover is getting progressively thinner. Ice that was 4 meters thick before is now half that. As ice melts in the summer, deep blue water is exposed, which absorbs solar energy that was before being reflected back out into space by the snow-covered ice. (Much like the difference between having a white roof, or a dark-colored one, on your house.) This radical shift, from reflection to absorption of energy, is causing much more rapid heating of the arctic than, say, is occurring in New Jersey.

The food chain of polar cod, seals and polar bears is being further stressed, surprisingly, by pollution that is carried on trade winds from northern Europe and Asia. As an example, Inuit indians have some of the highest levels of PCBs anywhere, and as temperatures warm, these pollutants become more mobile in the arctic ecosystem. Oil spills, an inevitable result as easier access to the Arctic attracts extractive industries, will pose an additional threat.

There is one small hope, however. Pfirman and others have used modeling to determine that the last vestiges of summer sea ice later this century will be found in an area north of Greenland. Discussions are underway to create a refuge there. In this way, a small portion of polar bears has a chance of surviving after others perish.

Though I felt a flush of sadness at the beginning of her talk, Pfirman described the devastating changes in a matter of fact way. Scientific inquiry can have its satisfactions, even when the subject of study is a human-driven process heading full tilt towards tragedy. People in dead-end jobs can seek new ones, but a polar bear in a dead-end habitat does not have that luxury. Some would say a polar bear is inferior because it cannot adapt, yet we are the one's who most clearly show a refusal to change, even in the face of well-studied consequences. It's the scientist's spirit of inquiry, that capacity to be dispassionate and yet deeply engaged, that we could all use, to get past the paralysis of guilt and denial, and figure out what we can do.
Posted by Stephen Hiltner at Friday, December 16, 2011