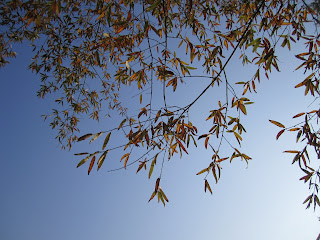 Recently, walking through a pleasant blizzard of falling willow oak leaves on Franklin Avenue, I remembered an ode to willow oak leaves I had written in the fateful fall of 2000 while living in Durham, part of North Carolina's Research Triangle. It was this time of year, in a city whose streets were and still are lined with willow oaks, and the enormous specimen in our yard was laying down a fresh layer of soft, attractive mulch. 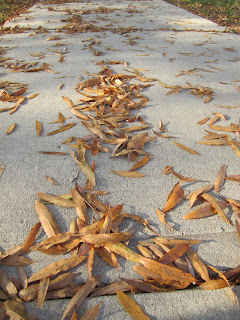 We had long since given up trying to grow lawn in deeply shaded piedmont clay, in favor of letting pine needles and willow oak leaves fall where they may. The pines down there are loblolly and shortleaf. Unlike the more northern white pine planted in Princeton, they are "self-pruning", meaning they drop their lower limbs to eventually become a vaulted canopy, creating an expansive, protected, cathedral-like space beneath, through which leaves and needles make their long, idiosyncratic descents to earth in the filtered light.

The piece below was published on the editorial page of the Raleigh News and Observer as one of their periodic pastoral pieces, almost certainly completely overlooked in the tumult following the Bush-Gore election that had taken place the day before.

The Work of an Autumn Breeze

The narrow leaves of willow oak spin earthwards, catching flashes of morning light. In walks along the treelined canyons of city streets, we are all victors in a ticker tape parade. The sun's rays, having lost their summer harshness, now angle into the sheltered air beneath trees, illuminating the languid descent of leaves from vaulted canopy.

Not all leaves are so elegant. Pine needles plunge earthward like clouds of arrows. The broader leaves of maples fall in rocking zig-zags. But willow oak leaves are so designed to celebrate their momentary freedom in one long graceful pirouette. They spend summer clustered overhead, anonymous in dense masses of green. Then, made expendible by autumn's chill, refined of all colors but gold, they become a million individualists in their first and last dance back to earth. In loose embrace with gravity they fall, each spinning in its own manner, at its own tempo, each captured by the sun's beaming light for all time and but for a moment.

The young girl next door tries to catch one, and quickly discovers how illusive they are--so tangible in their approach, yet like phantoms unwilling to have their only dance cut short. Having reached the ground, again anonymously massed, they mingle and merge and return by degrees to the soil from which they came.

At such times, it is hard to think of leaves as anything but a gift. In the competition between lawn and leaf for my heart, lawn has had to yield. I used to pick up the sticks, and rake the leaves, and mow threadworn grass. But now I channel my yard's sylvan tendencies rather than struggle against them. The leaves fall where they do for a reason: to soften the soil, to catch the rain, to help dogwoods through the droughts and give kids one more reason for delight. What pleasure to trace a leaf's whimsical flight, and find at bottom a sense of rightness and rest, rather than impending chore. The Triangle is a forest masquerading as metropolis, and we are the beneficiaries of its golden rain.