Acorns, anyone? It's called "flooding the zone"--a technical term commonly used by botanists who grew up playing sports. Some people see it as a mess, and curse the trees. An alternative target for cursing, just to put it out there, would be the tree-phobic landscape of concrete and lawn that we impose beneath the trees. A forest floor is far more accommodating of arboreal excess. There, a tree can let it all hang out, let it all fall down--seeds of all sorts, leaves, branches--and the forest floor will shrug, take it all in, and turn it into wildflowers. 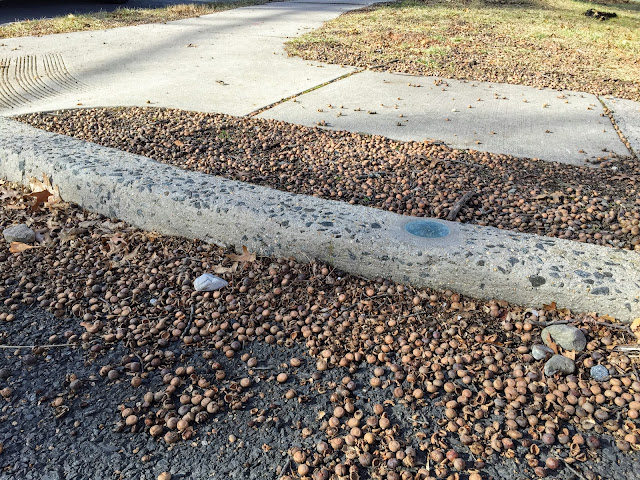 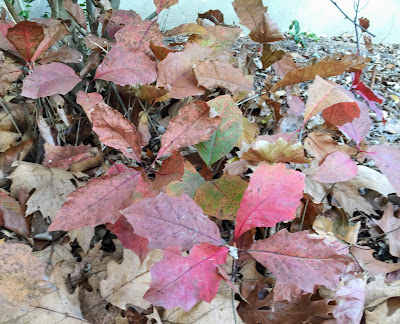 In town, the blanketing of acorns turns into a blanketing of oak seedlings, few if any of which have any prospects of reaching maturity. The seedlings seem to be saying, "Move me to an opening along the street where I could shade some asphalt", but it doesn't look like people are listening.

For some people, a love of trees is layered with deep resentment of this fecundity. For me, looking for logic in nature's ways, the question is not "What to do with it all?", but "What's missing?" Past posts about osage orange and honey locust ask the same question, and suggest a missing herbivore that would have consumed the abundance in the past. Botanical abundance has lost a once complementary zoological abundance. 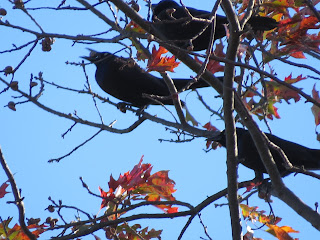 A partial answer came this past Nov. 10, when masses of starlings swept through, congregating in the pin oaks behind our house. A closer look revealed they were gobbling down acorns. Minutes later, they were gone, having left our pin oaks a little lighter. 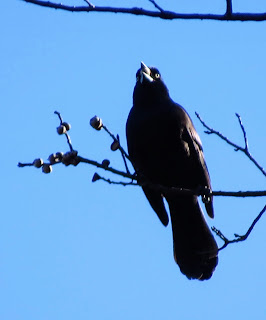 The starling is not native, though, so doesn't speak to what would have consumed the oaks' abundance historically. And starlings appear too small to deal with the larger acorns of other species such as red oak. Still, it's behavior suggests that the spectacular fecundity of oaks might once have fed a complementary fecundity in the avian world--some highly mobile species, large enough to deal with a broader range of acorn size, that could make quick wing across eastern North America, swooping in to feast and move on. 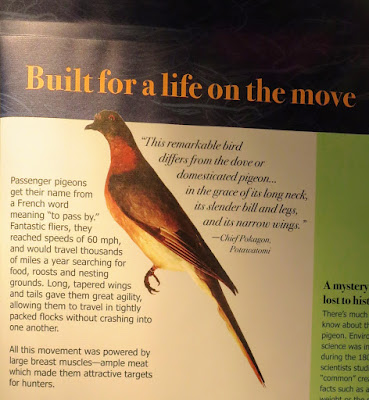 Enter Ectopistes migratorius, a.k.a. the passenger pigeon, a bird of spectacular mobility and historical numbers. The photos are from a wonderful NJ State Museum exhibit two years ago. 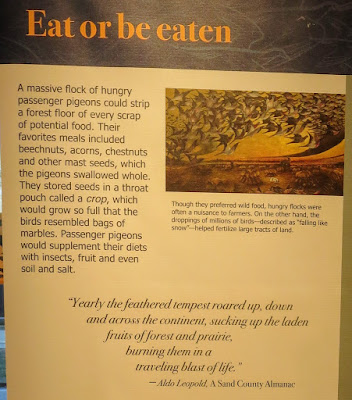 A fine writeup on the Smithsonian website says "the mainstays of the passenger pigeon's diet were beechnuts, acorns, chestnuts, seeds, and berries found in the forests." They may also have swept in to feast on the seeds of our native bamboo, Arundinaria, which at one time covered large areas in the southeast and, like other bamboos, typically bloomed only once every several decades.

It can be tempting to say that the starling is providing a service by partially filling the void left by the extinction of the passenger pigeon. A few books have come out in recent years that claim invasive species like starlings aren't a big problem after all. The books in turn embolden news editors to publish articles and opeds with a similarly seductive revisionism, showing the same willingness to cherry pick evidence and rush to conclusions. I've written detailed critiques of various of these, including one recent article that mentioned starlings. 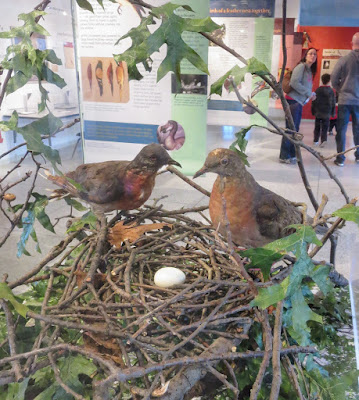 It would be interesting to explore to what extent the massive numbers of starlings have filled the niche left empty by the extinction of the passenger pigeon. Though feeding habits may overlap somewhat, one big difference is likely to be nesting behavior. Starlings compete with native birds for nesting sites, while the passenger pigeons appear to have built nests on branches, where they would not have displaced birds seeking tree cavities.