Update:  A full-length video of the show, which got a standing ovation, is now online. Get a bowl of popcorn, settle in and check it out.

Come on Friday, Jan. 18, to a free performance of Climate Cabaret's original theatrical sketches and climate-adapted songs at the Unitarian Universalist Congregation of Princeton. Gather at 7:00 for light refreshments. Show starts at 7:30pm. 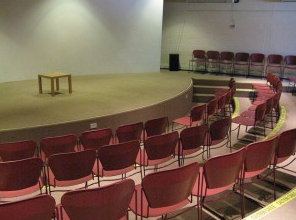 Thanks to our generous Unitarian hosts for allowing us to use their Sophia Fahs Theater, a wonderful little theater which, among other things, long ago served as the birthplace of McCarter Theater's children's theater programming, under the leadership of John Lithgow's father. This will be Climate Cabaret's first performance in a space designed for theater.

The UUCP's Fahs Theater is located at 50 Cherry Hill Road in Princeton, just up from 206.

Placing climate change in a theatrical setting can lead to unexpected insights about nature and human nature. Gain fresh perspectives on Carbon (a seductive renaissance atom, but beware--not all carbons are the same!). Witness a man's tragicomic breakup with his car. Explore Earth Logic in Space. Shakespeare's Titania comes by to warn about a "distemperature" in which "we see the seasons alter," and King George VI finds the courage to read The King's Climate Speech. The Tense Family argues about whether the future is imperative or conditional. A couple in a car speeding towards a cliff debate whether it's enough just to slow down. Written and directed by Steve Hiltner, these theatrical sketches combine with climate-adapted songs that speak to a deep love for a world whose wonders are perilously taken for granted.
Posted by Steve Hiltner at Friday, January 11, 2019