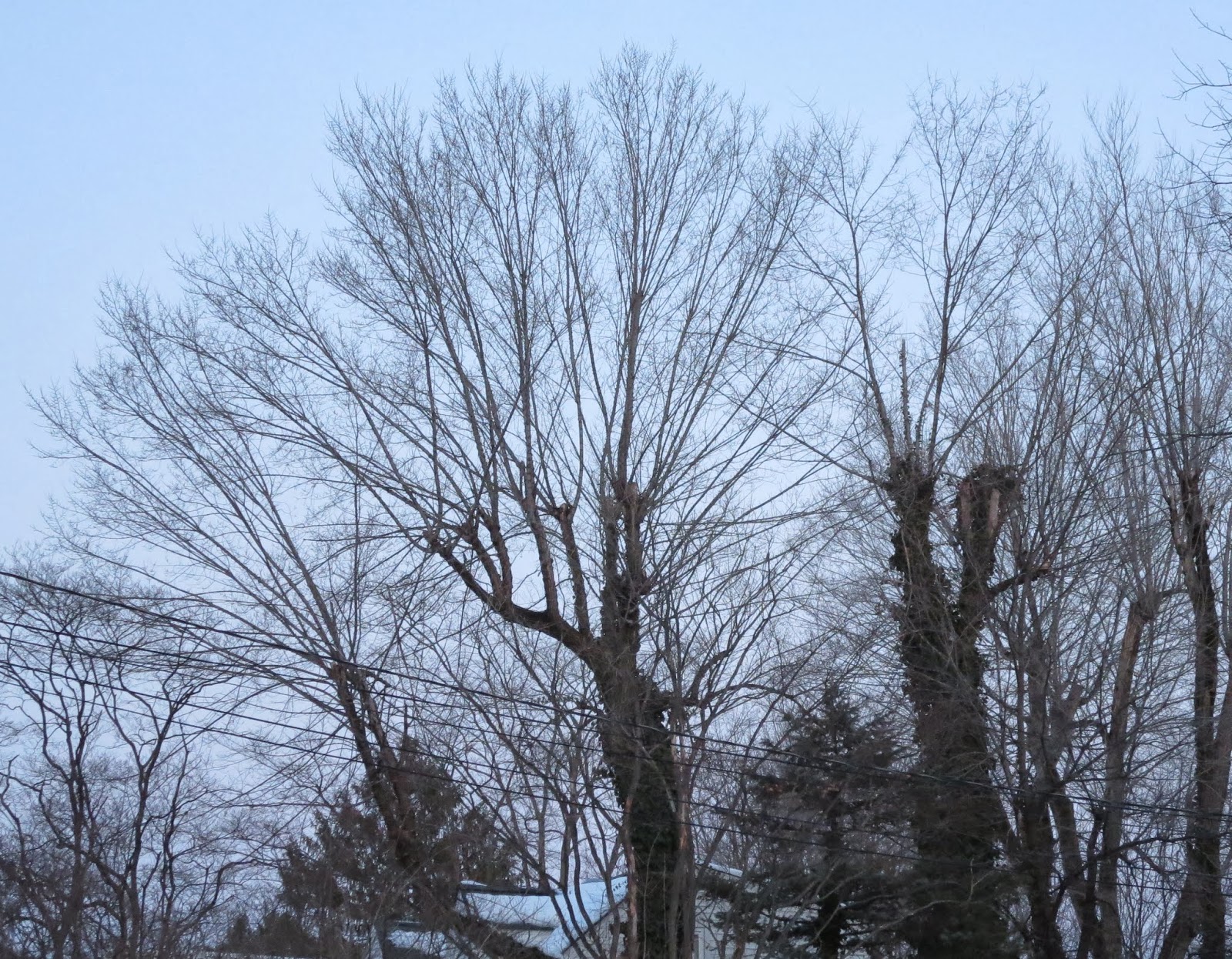 Hidden in Princeton's stark winter canopy are subtle signs of a quiet revolution, or at least something decidedly French. Some may view this tree profile as deeply troubling, while others may see a useful approach to solving several problems Princeton and other NJ towns are currently confronting. Halfway down the trees, you'll see a sudden thickening of the trunk. That's where the tree was given a buzz cut, maybe ten years ago. New shoots then sprouted from the cut tips.

This practice is called pollarding, defined as "a pruning system in which the upper branches of a tree are removed, promoting a dense head of foliage and branches."

When I've mentioned this practice to local arborists, the response has typically been negative, with talk of increased risk of disease, and structural weakness.  It's true that I've seen a couple radically pruned trees send out a few feeble shoots the next year, and then die, leaving the likes of a telephone pole in the yard. But results depend on technique, timing, and species of tree. In Europe, where pollarding has for centuries been a clever means of harvesting fuel and forage from trees without cutting them down, the pollarded trees are said to actually live longer than untrimmed trees. (Coppicing, a related practice of periodic heavy pruning once commonly used in agriculture, allows repeated harvest from a tree root that can live for 1000 years.)

My first reaction years ago, seeing a grove of trees getting hacked back in a city park in Madrid, was one of disdain and disgust. How could anyone choose to interfere with a tree's yearning for the sky? There's pleasure in tracing a massive tree's natural ramification, up and up to the top of the canopy. A tree, like a river, should run free.

Though a natural growth form works in most situations, I began to question my dismissive attitude towards pollarding about 15 years ago, when hurricane winds flattened many of the oaks in the NC town where I was living at the time. My view of oaks as being deeply rooted and timeless also came crashing down that day. Though most of the giant trees displayed an uncanny knack for missing cars and houses on the way down, I was made suddenly aware that we essentially accommodate wild trees in our midst, reaping all the benefits and potential downsides thereof. One of the willow oaks that survived the hurricane winds unscathed had been pruned years prior, pollard-style, causing the crown to be populated by many narrow, flexible branches, none of which was large enough to damage a house if it broke off. For years I had looked at that tree's altered growth form with dismay, yet there it was after the storm, a healthy survivor continuing to provide shade with minimal threat of doing harm to the house it was shading. 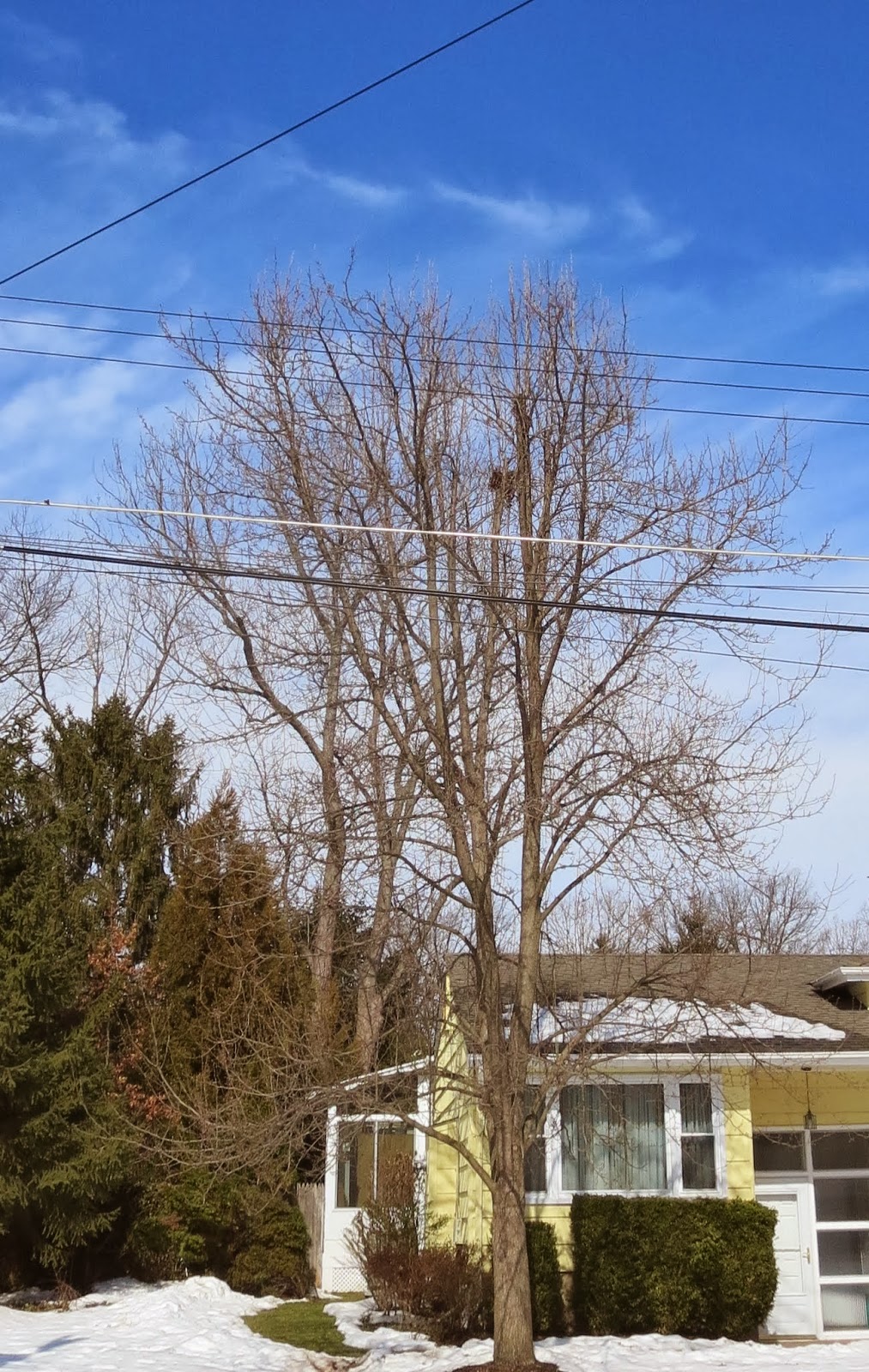 With Hurricane Sandy and other highly destructive storms sweeping through Princeton in recent years, some homeowners are torn between all the benefits trees can bring in the urban landscape, and the potential downsides of having all that weight poised above the roof. Personally, I have our trees looked at periodically to make sure they're healthy, and accept the risk. But if there's a way to manage trees so that one gets the benefits while minimizing the hazard, that could lead more homeowners to keep the trees they have and plant more.

Now, before buds open, is the time to check out what's being done around town. This photo and the closeup that follows shows evidence of trimming back on a tree that beautifully shades the house in the summer. 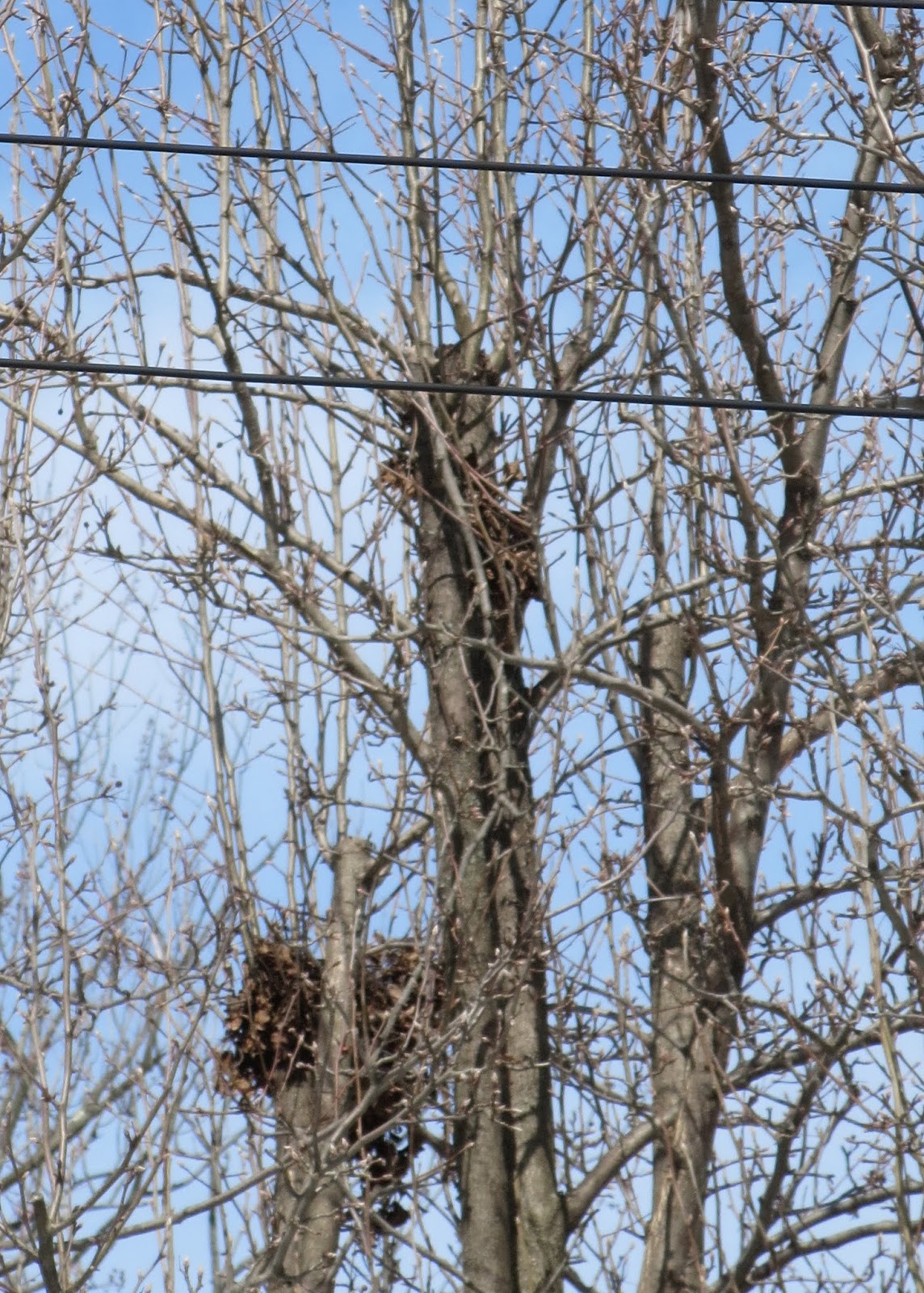 Perhaps the tree lost some high branches from high winds, or maybe it was an intentional effort to minimize any additional height. 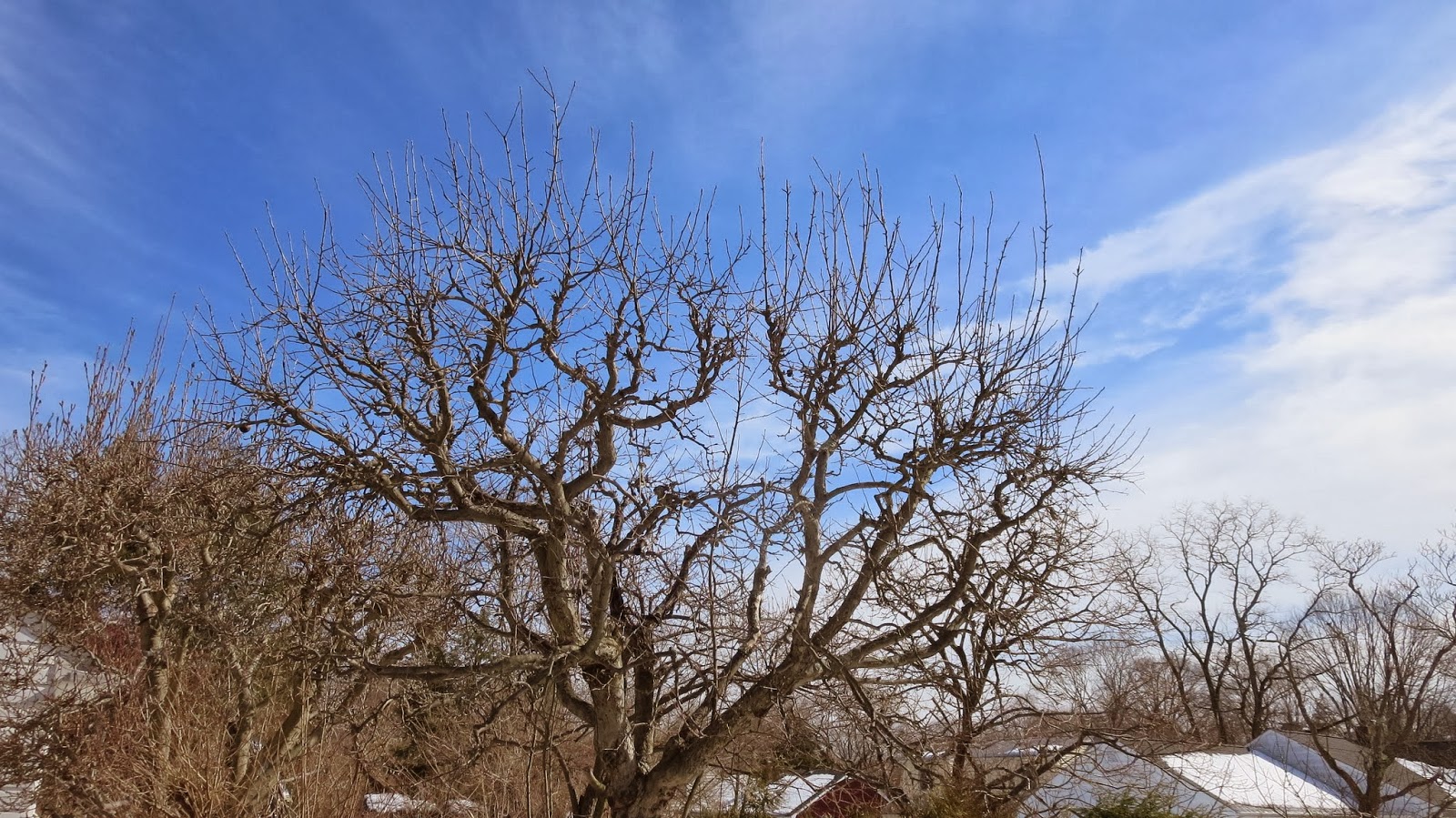 Once one opens up to the idea of manipulating tree growth, a whole new range of possibilities opens up. Fruit trees of course, like this one in an Italian neighbor's backyard, greatly benefit from regular pruning. But a related approaches can be used for trees grown for any purpose, be it firewood, nuts, forage or shade. Pollarding and coppicing (a related practice) are used particularly in permaculture to maximize production in small spaces. If Princeton is serious about growing its food and fuel locally, a more engaged approach to managing trees will be a big component. Interestingly, these practices are also a means of managing lands for biodiversity, by creating more varied habitat.

These periodic prunings can also have benefits for both soil and atmosphere, by increasing soil organic matter and sequestering carbon. To grow roots, a tree utilizes carbon dioxide from the air to manufacture the building blocks of its structure. By growing roots, trees essentially transfer carbon from the air down into the soil. Each time a tree is pruned, a portion of its root system will die back to rebalance the ratio of roots to limbs. The roots that die back provide a legacy of carbon-based organic matter in the soil and channels for rainwater to seep into. New roots then grow as the canopy recovers, sequestering additional atmospheric carbon underground. More on the many benefits of coppicing at this link.

How these practices would fit into Princeton's goals for shade, food and sustainability are worth considering. The blanket condemnation of pollarding found in pruning manuals doesn't fit with examples past and present of its usefulness. If techniques specific to New Jersey's trees can be developed and accepted by arborists, this approach to pruning could add to the ways tree growth can be controlled to better coexist with homes and solar panels, and thereby increase the number of trees in town.

Here are some examples of pollarding in Paris.

My writeup on another transformative agricultural practice with big consequences for sustainability, the growing of the currently banned crop called hemp, can be found at this link.