Primrose Past and Present 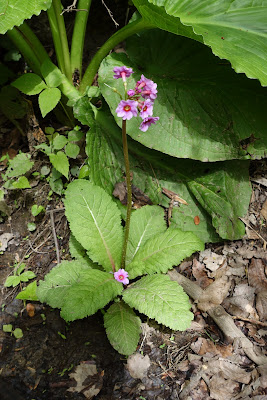 This post was supposed to be about the mystery flower in the photo, sent to me May 10, but its shape brought back memories of primrose past and shifted the writing to something more like memoire. Sometimes, sitting down with the intention of writing about one thing, something very much different pops out.

You can skip to the chase by scrolling down to the identification of this primrose found by Susan Michniewski during a walk in Woodfield Reservation, but first a primula-induced interlude that skips back to the 1970s.

When I was 16, my father left Yerkes Observatory to become chair of the astronomy department at the University of Michigan. For my family, that meant moving from small town Wisconsin to Ann Arbor, MI. It wasn't much of a move compared to the overall size of the universe, but for me it meant transitioning from a school with 50 kids per grade to one ten times larger. I don't recommend moving in the middle of high school, but at the time I was so introverted that one place was probably about as good as another. In retrospect, having made as yet no sense out of humanity or myself, I was well primed for connecting to the plant world.

During the house search that first year in Ann Arbor, we got lucky. My father had learned through the department that a deceased physicist had left behind his estate--a house and garden. It hadn't even gone on the market, and I remember our first magical visit to the empty house in the fall. The abandoned feel of the place stirred parts of my brain that must date back to a distant, less populated era, as when a wandering tribe might happen upon a long abandoned valley that nature had begun to reclaim, and feel a sense of forsaken treasure and possibilities.

A door to the back patio had been left open at one point, because autumn leaves lay scattered on the hardwood floor of the living room lined with metal casement windows and paneling made of sweetgum wood. The living room had a high ceiling, and we were told that it had been designed for music. The physicist, Walter Colby, I have recently learned via the internet, once dreamed of being a classical pianist. A few of his effects had been left behind--a brass inkwell, and green paper napkins that referred to the miniature valley behind the house as "Thorn Hollow." The house was embraced by a lovely english garden, and that first spring, the garden revealed its secrets--a salve for my lonely soul. Down in the hollow a venerable elm tree spread its graceful limbs over walkways lined with yellow primrose and Pulmonaria. Sweeps of Scilla and other bulbs ornamented the slopes. Native wildflowers--mayapples, Trillium, Solomon's seal--rose in the informal beds defined by the trails. A quince tree below the rock-walled terrace still bore fruit.

It seemed a timeless place, with balance and beauty, a peaceful coexistence of plant life, but over time that timelessness was put to the test. The elm tree succumbed to Dutch elm disease. The redbud became overgrown, losing its graceful shape. Maintaining balance in the garden beds involved many hours fighting the advances of garlic mustard and the goutweed that clung to the ground with a vengeance. In sunnier areas, pretty garden phlox began to pretty much take over. Myrtle proved a mixed blessing, too, embedding itself most everywhere.

The more I got interested in gardening, the more I found myself spending an inordinate amount of time dealing with a few bad actors that refused to play well with others. There were still joys, like when a pawpaw tree volunteered in one of the beds and ultimately bore fruit, its origins a mystery. Favoring practical plants, I started a vegetable garden. As trees closed the canopy, we moved the vegetables out front to the sunniest place remaining, between the sidewalk and the curb. Neighbors, at least the neighbors who commented, took delight in our unorthodox rethinking of the front yard.

The primrose in that garden were yellow--probably cowslip (Primula veris), native to Europe--and were about as docile and unadventurous as can be, not weedy in the least. 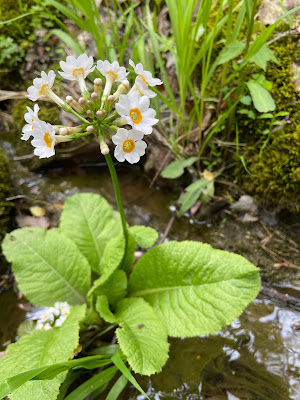 That's why I was surprised to hear that a primrose species was found this spring growing wild in Woodfield Reservation. It had the same rosette of leaves at the base as cowslip, with a burst of flowers like a circle of trumpets at the top of the stem. But the flowers were red or white rather than yellow, and this one was reportedly spreading along the streambank.

We decided it is Primula japonica. I checked in with Mike van Clef of the NJ Invasive Species Strike Team, who said he hadn't encountered it anywhere in NJ other than near the footbridge in Woodfield Reservation, and that it's worth keeping in mind if it seems like it's spreading.

Thanks to Susan Michniewski for sending photos, and to photographer Douglas Meckel.