A Wet Meadow is Born

It looks like a barren expanse, essentially an acre-sized bowl of brown, just down from the parking lot at Smoyer Park. 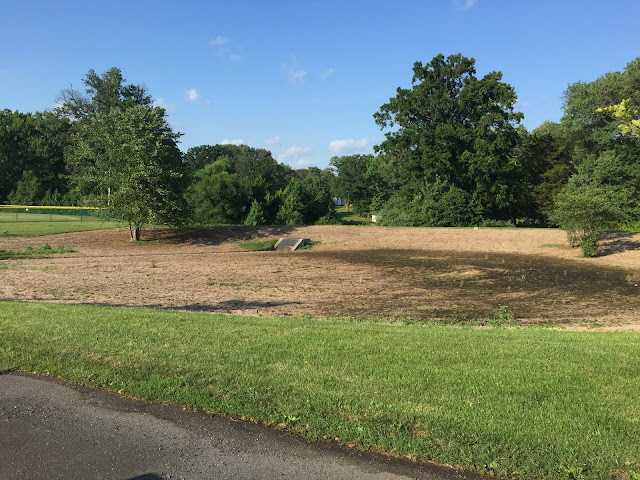 But look at it with a vision for what could be, and you'll see not so much the present as the future. The photo below is a wet meadow in Ann Arbor's Buhr Park, where some portions of vast turf were regraded and planted so that runoff from nearby streets and homes can be filtered through native grasses and wildflowers, and seep down into the groundwater, which in turn feeds the local creek. Function and beauty, all in one. Much of its beauty owes to the ongoing care provided by a friend and dedicated neighbor of the park, Jeannine Palms. 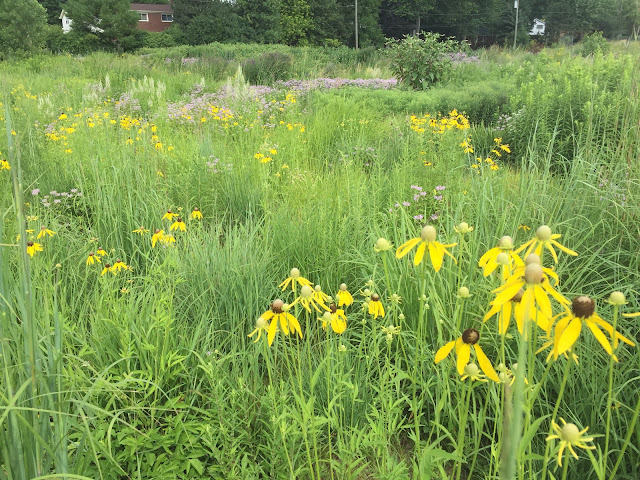 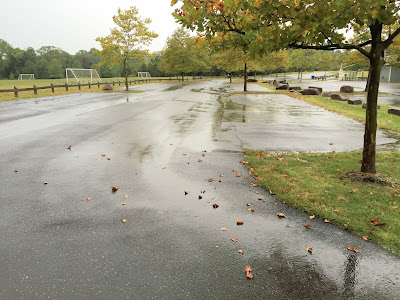 Meanwhile, in Princeton's Smoyer Park, rainwater flows down the broad parking lot towards the basin, 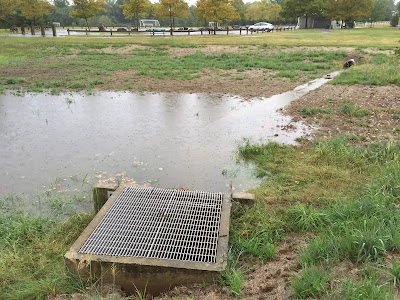 Where it ponds and slowly seeps, in or departs through a small aperture in the outlet. Each inundation adds to an underground reservoir to sustain the deep-rooted natives through any drought--a resilience all the more relevant as climate change brings more weather extremes. 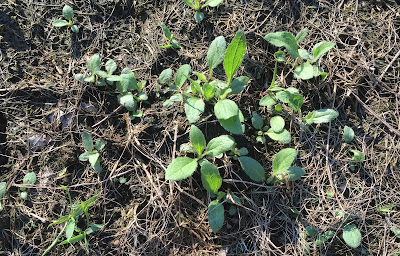 There was some suspense, in early summer, whether the seeds for this meadow-to-be would respond, but some timely rains came and the black-eyed susans sprouted, along with a substantial portion of the fifteen or so other native species in the seed mix.

The project is a coordinated effort that was initiated by yours truly and given the go-ahead this past spring by Princeton municipality. Partners for Fish and Wildlife, a federal agency that has done other good deeds in Princeton and across the state, prepared and planted the ground, at no expense to the town. The Rec department put up No Mow signs, and the nonprofit I lead, the Friends of Herrontown Woods, is charged with doing the all-important maintenance. 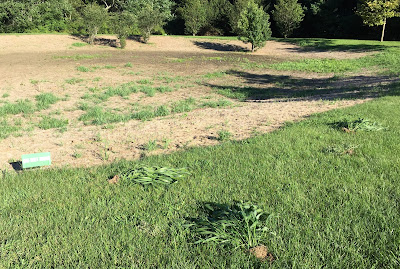 Thus far, that maintenance has involved spending a pleasant evening hour now and then, doing some light weeding. Passersby stop to ask what's going on, and are happy to hear the park will soon have a little color to go with the broad expanses of ballfields. 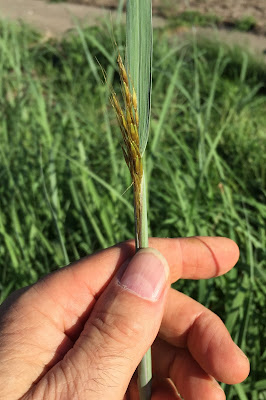 The planting has brought back memories of the first garden I ever planted, a 2 x 6' grid of different garden vegetables. I'd look at it every day after school to witness the changes. Each new leaf was a revelation (So that's what a carrot leaf looks like!).

This time, it's plants that are more likely to feed birds and insects, but each new bloom gets celebrated just the same. This is the first Indian grass flower opening. They have golden anthers that can create a subtle but beautiful effect when massed. 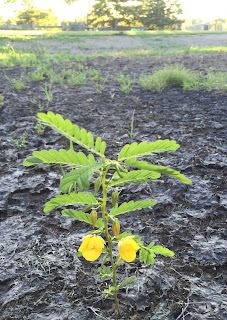 First wildflower to bloom was partridge pea, a native that should replace all the highly invasive, exclusionary Chinese bushclover used by various states for erosion control. 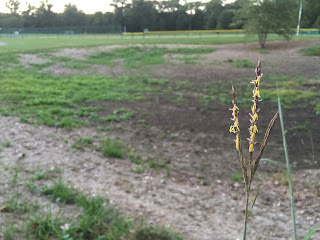 Though the native grasses put much of their first year's energy into building a root system, many have now bloomed. Here's a big bluestem, whose branched flowerheads give it the name "turkey foot". Big bluestem and Indian grass, found here and there in NJ, are the same species that dominate the tall grass prairies of midwestern and plains states. 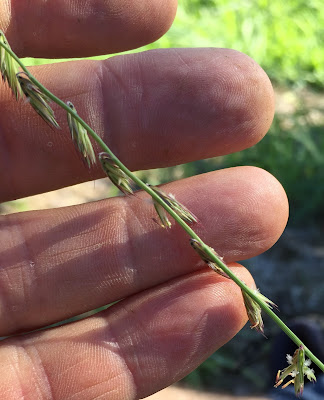 This is side oats grama, a shorter grass that I don't associate with eastern piedmont, but is often found in seed mixes for meadows. 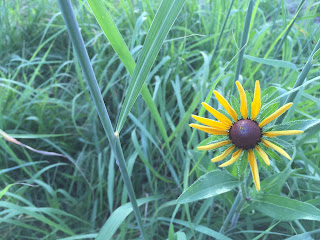 I had to be fast with the camera to photograph this first black-eyed susan flower, 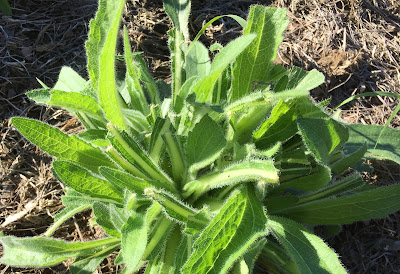 because most are being chowed down by the deer. Hopefully when the grasses become thicker, the deer will be less thorough with their browsing. 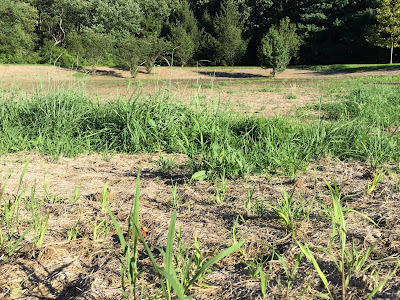 There's a lot of variability in the density of the new plants, but even the seemingly bare spots have grasses sprouting. 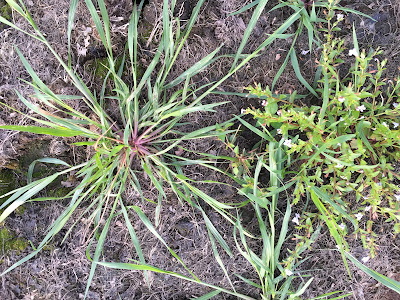 Identifying which grasses to weed out requires a close look. Generally, the grasses that spread out horizontally, like crabgrass, are the weedy annuals to be pulled before they go to seed. 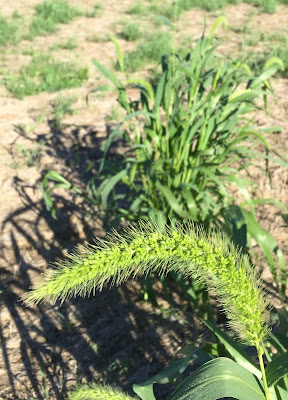 Foxtail also is also getting pulled. It grows more vertically, 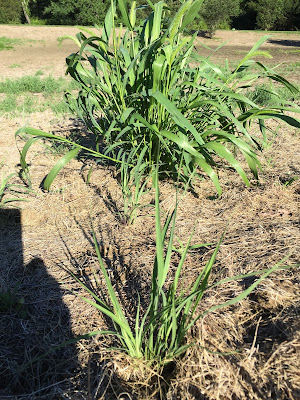 but even without the seedheads can be distinguished because it's fleshier than the leaner looking native grasses, e.g. the one in the foreground of this photo. 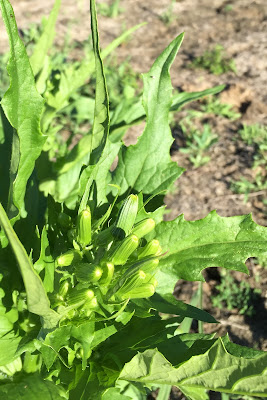 Pilewort is a native I tend to weed out, along with 3-seeded Mercury. 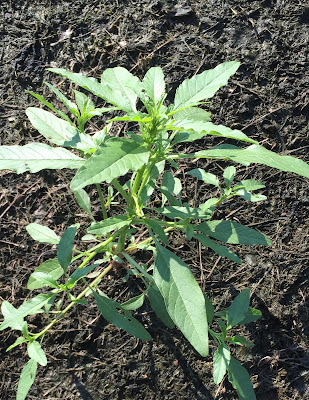 Amaranth is another which, if allowed to go to seed, could grow to shade out the intended plants next year.

To be able to do this light sort of weeding at the outset gives a wonderful sense of control. So often, there's a delay in intervention, the weeds assert themselves, and the gardener/land manager scrambles to steer a stampede of plants.

Evenings are peaceful at Smoyer Park, bringing back memories of childhood pickup games of softball or soccer, played until the day had no more light to give. 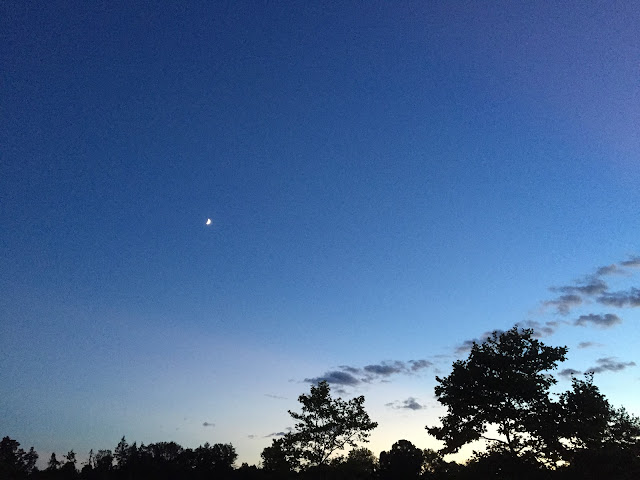