The Pandemic, Recycling, and How People Change

"Environmental education is just words on paper waiting for necessity to make them required reading."
-- SKH
People have always embodied a contradiction. As a species we are extraordinarily adaptable, and yet we often resist voluntary change and complain about any change imposed upon us. This contradiction is embodied in the nation's lack of action on the climate crisis. We are resisting even small changes in our behavior now, as if saving our adaptability for the massive changes to come.
The pandemic's imperatives sent much of that irrational tentativeness and procrastination packing. We changed our lives radically to save lives. Necessity mobilized our long dormant resourcefulness and capacity to adapt.

As an environmentalist, I believed for many years that people could be convinced to change their ways if given a convincing reason to do so. I believed in the power of logic and knowledge to change the world. Personal experience led ultimately to my letting go of such idealistic notions, and recent years have dramatically demonstrated nationally how hard it is for people to let go of emotionally satisfying fictions.

Yet I worry that many younger environmentalists, propelled by enthusiasm and a sense of rightness, will nevertheless mistakenly invest their time and youthful energy in trying to get people to voluntarily change their ways. 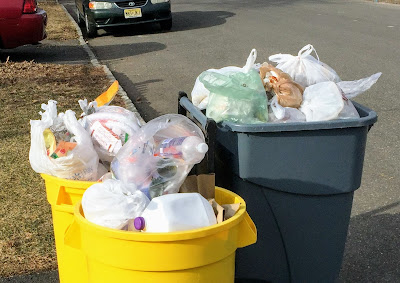 CURBSIDE RECYCLING
Even before the pandemic, in the fall of 2019, there was a local example of how real change happens--the Mercer County recycling program used in Princeton. For years, Mercer County and Princeton have been telling residents NOT to put plastic bags in curbside recycling bins. Flyers were distributed, scolding letters to the editor were written, yet the plastic bags remained as numerous as before.

Why did all these attempts at education fail? Because the county's lack of enforcement was in itself a far more powerful form of education. Residents learned not from words but from what they can get away with. The only education that mattered was a lax policy's powerful message that plastic bags were really okay, after all.

Finally, collection crews were told to leave bins that were contaminated with plastic bags uncollected on the curb. Only then, when residents were denied service, did they change their behavior. Within a month, all residents had learned a lesson that countless flyers and reminders had failed to teach.

It was at that moment, when residents found their bins unemptied, that they finally sought out the information necessary to conform to the county's requirements. Being highly adaptable and resourceful humans, they quickly changed their ways and began following a rule they had been ignoring for years.

The same holds true for any other environmental aim, be it more nature-friendly landscaping or reducing one's carbon footprint. As the examples of the pandemic and curbside recycling show, necessity is what changes behavior. It mobilizes an innate resourcefulness, adaptability, and inventiveness that otherwise remain dormant. In this sense, education is just words on paper waiting for necessity to make them required reading.