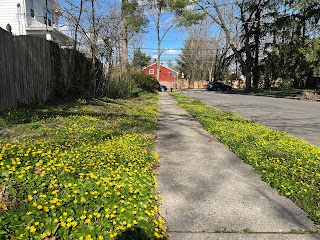 It's time for the annual call to action to prevent lesser celandine from taking over all of Princeton. Also called fig buttercup, it's a highly invasive nonnative plant that is spreading rapidly, yard to yard and into parks and nature preserves, where it degrades habitat for wildlife. It thrives on homeowners' indifference and inaction, so I've been doing what I can, urging town officials to defend our parks and preserves, urging homeowners to take action in their own yards, explaining that herbicides are not anti-nature if they are used selectively and medicinally. My letter to the Town Topics and other local publications starts like this:

Blooming in many people’s yards right now is a small yellow flower that, upon closer inspection, proves not to be a dandelion. Variously called lesser celandine or fig buttercup, its radical invasiveness triggers a predictable progression of emotions in the homeowner. Delight at its pretty flower soon turns to alarm as year by year it takes over the yard, spreading through flower beds, across lawns and into neighboring properties. What may start as a few scattered, harmless-seeming clumps quickly becomes the equivalent of a rash upon the landscape. Unlike the dandelion, lesser celandine also spreads into nature preserves. Poisonous to wildlife, it forms thick stands reminiscent of pavement. Over time, our nature preserves become less and less edible to the wildlife they were meant to support. Native diversity shifts towards non-native monoculture.

Below are some photos to help with identification, and here is a link that includes suggested means of stopping it from taking over your yard. Though the link says only to spray through early April, I'd suggest that spraying is helpful for as long as its leaves are green. Lesser celandine is a spring ephemeral, meaning that it comes up early, then dies back in June, going dormant until the next spring. Gardeners who like to dig up plants of this or that to give to friends should be aware that, if their yards have been invaded by lesser celandine, some of it may hitchhike in whatever plants they dig up later in the season to give away. They may unwittingly be giving a fellow gardener the beginnings of a major headache.

Lesser celandine is poisonous, and yet some websites declare it edible and offer recipes. Why the contradiction? Apparently, lesser celandine accumulates toxins later in the spring. The toxins break down during cooking or after drying. Still, one takes one's chances trying to eat it, and, alas, wildlife don't cook.

I've seen bees collecting pollen and nectar from the flowers, which is all fine and good, but this doesn't compensate for the inedibility of the leaves. The invasion of our lands by nonnative plants that wildlife don't eat essentially shrinks the acreage of functional habitat in Princeton, even though a great deal of open space has been preserved. Thus the need for management.

Given that some areas of Princeton have been overrun by lesser celandine, it's important to defend those areas that have not, by closely monitoring and spot spraying where the plant is just starting to move in. Invasions begin with just a few plants here and there. An absolute minimum of herbicide is needed to easily defend these areas. Lesser celandine can easily be distinguished from dandelion. Walk the grounds before the grass gets mowed in the spring and while the plant is blooming. For lawns, a product like Weed B Gone works. For other areas, a 2% solution of glyphosate does the trick. Since glyphosate can take a week to show visible effect on the plant, it's best to spray early in the spring so that there's time to see results and spray any areas missed. For those near wetlands, wetland-safe formulations of glyphosate are available, so Roundup is not the only option.

In terms of aesthetics, lesser celandine's dense, exclusionary growth does to the landscape what people badly afflicted with narcissism do to social situations. A woodland that once hosted a diversity of native wildflowers becomes, when overwhelmed by lesser celandine, one species' declaration of Me! Me! Me! 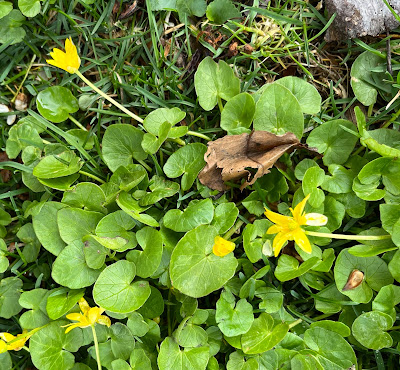 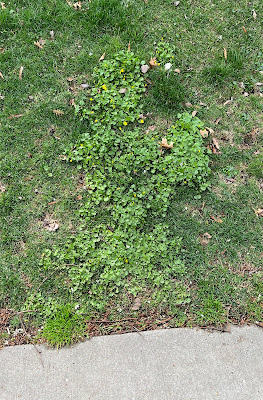 Here's an example of the blotchy appearance an early invasion creates on a lawn. These blotches expand until the whole yard is coated. 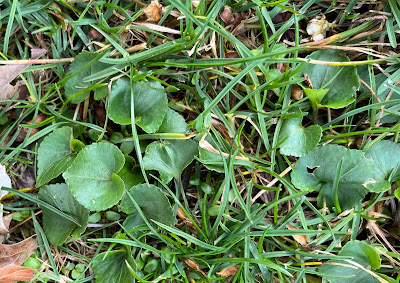 The closest lookalike in the lawn is the violet, whose leaves are darker, more curled, and more toothed along the edges.
Posted by Steve Hiltner at Friday, April 15, 2022