The Invasive Species of the Month Club

Surely it's not an original concept, but it's a great idea nonetheless: an Invasive Species of the Month Club. Nature can be baffling in its complexity, intimidating, and for some, downright off-putting. If you love plants, then you welcome the diversity of species out there to be learned. Monocultures are boring. But if you have little curiosity about nature, then complexity becomes onerous, and simplified landscapes like a front lawn are experienced as reassuring. And then there are those who really like nature and want to help it, but for whom plant names go in one ear and out the other. 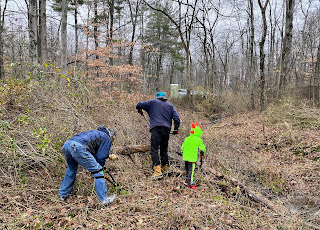 The Invasive Species of the Month Club, conceived for Herrontown Woods by FOHW board member Inge Regan, helps people get acquainted with invasive species one at a time. The nonnative plants spreading through local preserves are often the same ones popping up along fence rows in the backyard, so volunteers gain knowledge they can put to use at home. Every Sunday morning we gather to go after one invasive in particular. Some can be pulled out by hand; others require loppers. 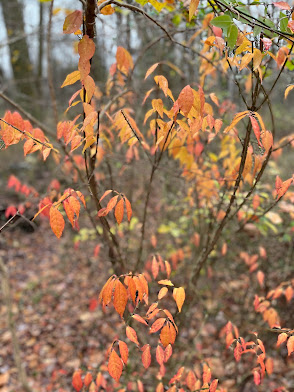 In application, the concept becomes more flexible. We may not focus on one invasive for a full month, but at least each week there is a plant to be focused on.
Burning bush, aka winged euonymus, is easy to identify any time of year by the "wings" on its stems, but even easier in the fall when it turns various shades of red or pink. It's pretty, but because deer don't like it, its proliferation is making the forest less edible for wildlife. 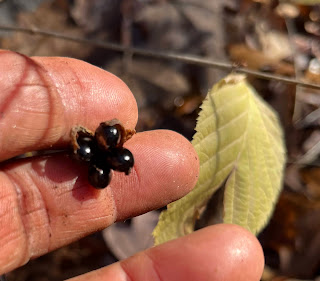 We spent one morning early in December pulling out jetbead, named after its clusters of black berries. In December, it can be the only shrub that still has leaves, so becomes super easy to identify then. 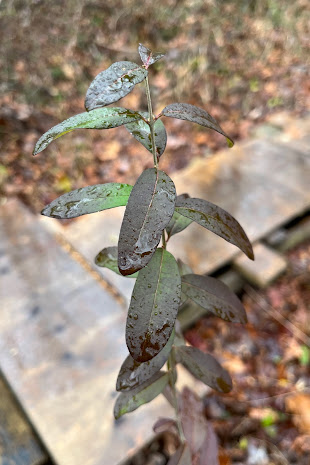 Privet will keep its leaves all winter, so will be a good candidate for focused effort through the winter. The leaves can vary in shade of green, confusing someone new to the shrub, but that's the idea of focusing on one species at a time. Multiple encounters with privet eventually lead to a confidence in identifying it in all its shades of green. 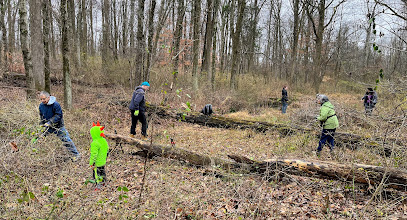 Privet was the main focus of this past Sunday's Invasive Species of the Month Club. The weather was cold and damp, with rain threatening, but surprisingly it was one of our most satisfying sessions. The little boy in the lime green dinosaur coat was totally into it, and we managed to clear a whole section of the valley of a dense tangle of invasives. There's enough space in the tree canopy to power native wildflowers and shrubs there, once the invasive shrubs and vines have been subdued. That's the goal, but the process of group effort and gaining increasing confidence and familiarity out in nature have their own satisfactions.
Posted by Steve Hiltner at Thursday, December 15, 2022