Deciding What To Pull 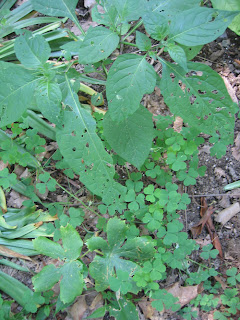 It's June, and all the cool season weeds have grown up to obscure what you were really hoping to grow. Knowing what to pull requires knowing what the undesired plants look like in all stages of development, and often without flowers to go by. Here's an example: What to pull in the picture to the left? Nightshade (poisonous), which will have a purple flower later on, is at the top. Those small groupings of three leaflets are wood sorrel, whose leaf has a nice acidic taste. You'll probably want to pull or mulch all of those, leaving the deeply lobed plant at the bottom of the photo. That's mayapple. 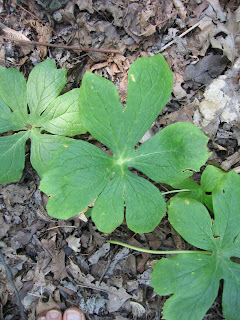 The second photo is mayapple without any weeds around. If you don't mind a woodsy appearance, you can just leave the leaves on the ground and let the mayapple push up through them. Weed seeds won't be able to sprout through a thick enough layer of leaves. 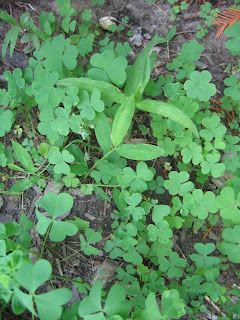 Here's another mini-riot of weeds obscuring one native wildflower. Wood sorrel, which produces a small yellow flower that turns into erect seed capsules, is mixed this time with Japanese Stiltgrass (an annual grass that can survive mowing or grow 2-5 feet tall in flowerbeds; the leaf is reminiscent of bamboo). In the upper middle of the photo is one native monkeyflower, which sprouted from a parent plant nearby and will have tubular blue flowers later on. That's the keeper, though the hundreds I've seen sprout in the garden suggest that in another year or two, the native and ornamental monkeyflower may prove to be too much of a good thing. 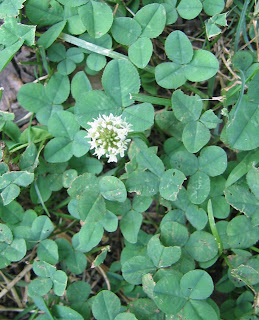 Most people know white clover--a worldwide weed. It fixes nitrogen from the air, and provides nectar for honeybees, but it can spread into flowerbeds and clutter them up. Its leaf looks alot like wood sorrel, but is a bluer green.
Posted by Steve Hiltner at Wednesday, June 27, 2007