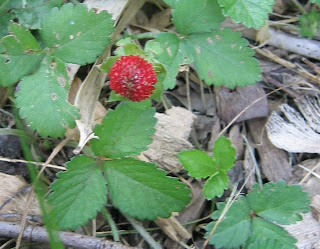 Our June Native Plant Workshop (actually Sunday, July 1, 2pm, meeting at Whole Earth Center on Nassau Street) is devoted to figuring out what to pull out of the less than perfectly ordered garden most of us are faced with this time of year. The usual definition of a weed is a plant out of place. For the purposes of the workshop, I'm defining a weed as "any plant you get tired of seeing pop up everywhere."

This can, and often does, include plants you liked when you first noticed them.

Take for instance this delicious looking strawberry (1st photo), which turns out to be neither delicious nor a strawberry. It's Indian Mock-Strawberry, originally from India, which either spreads into your lawn from the flowerbed or vice versa. 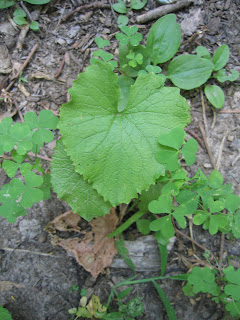 In this second photo, which includes small leaves of wood sorrel and common plantain in the background, is another plant you may like at first but quickly get tired of. Most people know it by the flowering stalk it forms in its second year--white flowers in April that form seeds before the plant turns into a less than pretty brown skeleton in June. That's when most people decide it needs to come out, but by then it's already spreading thousands of seeds to insure its continued presence in your garden.

A few years' worth of wisdom may lead you to pull it out or mulch it over in its first year of growth, when it forms a low rosette of large, yellowish-green heart-shaped leaves, like the one in the photo.

One of the many benefits of gardening is that it trains your eye to make distinctions where others just see masses of green. 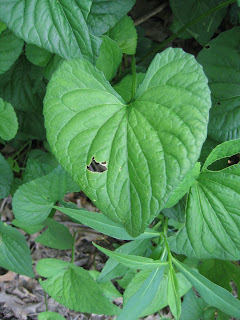 With some experience, you'll be able to distinguish garlic mustard from violet (photo)--glossier and less ragged 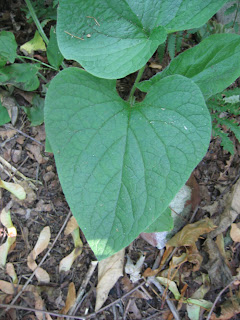 and Siberian Bugloss, which has blue flowers reminiscent of Forget Me Nots in the spring. None of these, by the way, with the possible exception of the violet, are native.
Posted by Steve Hiltner at Wednesday, June 27, 2007