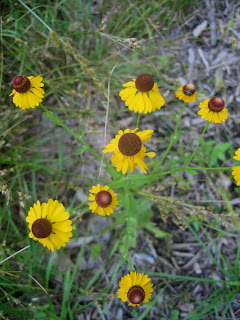 Many of the showiest wildflowers along the canal in Princeton bloom this time of year. I'll be leading a walk along the towpath this Saturday, August 11, at 10am, starting where the towpath crosses Washington Road in Princeton. There's a parking lot next to Washington Rd. just south of Carnegie Lake and the canal, where a service drive heads up to the university's ballfields. If you get there late, we'll be heading eastward along the towpath, towards Harrison Street.
The land along the canal hosts a remarkable diversity of native wildflowers, thanks to its combination of sunny openings and moist ground. The reduced mowing regime instituted last year by the D&R Greenway State Park has allowed many previously suppressed species to flower and spread.
The walk is sponsored by the Friends of Princeton Open Space.

(The photo is of Purple-Headed Sneezeweed, named of course for its reddish brown center, yellow petals, and general lack of sneeziness)
Posted by Steve Hiltner at Tuesday, August 07, 2007

Email ThisBlogThis!Share to TwitterShare to FacebookShare to Pinterest
Labels: Places To Visit, Walks