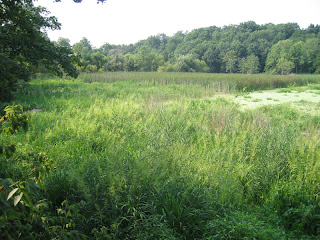 One of the more spectacular sights this time of year in Princeton is the wild rice blooming at the Rogers Wildlife Refuge. Though sometimes called "the Institute Pond", the refuge is actually located on water company property. A giant step towards restoration of the marsh was taken last year when Partners for Fish and Wildlife treated the invasive giant Phragmitis reeds that were slowly but surely taking over the marsh. Quickly taking the place of the Phragmitis monoculture is an impressive array of natives, including the wild rice, pickerel weed, arrow arum and water plantain. The refuge lies between the Institute Woods and Stony Brook, at the end of West Drive. It's best known as a birding mecca, and is taken care of through a collaboration between Friends of Rogers Refuge (FORR), the township and the water company. To get there, take Alexander Road down almost to the canal, turn right on West Drive and stay left until you reach the small parking area next to the observation tower. 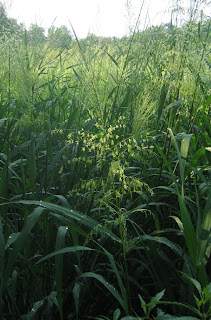 Wild rice, like corn, is an annual that grows to astonishing heights in a single season. Most people associate it with Minnesota, but it flourishes in Princeton, the Trenton Marsh, along the Connecticut River, and I've even seen it growing in a stream in Florida.
Posted by Steve Hiltner at Thursday, August 23, 2007