A Strange Fox at Greenway Meadows 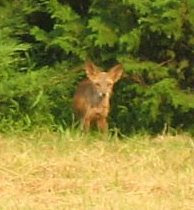 A couple days ago, Christy and Brian Nann sent me these photos of an animal they had seen at Greenway Meadows. In the first photo, it almost looks like a young deer, but the second photo suggested to us a strange version of a coyote.

I sent the photos to the Mercer County Wildlife Center for identification. Diane Nickerson emailed back that "it appears to be a red fox with a severe case of sarcoptic mange", and that the Center could treat it if it were trapped. Unfortunately, if the photos were taken back in August, there's little chance the fox has survived this long. 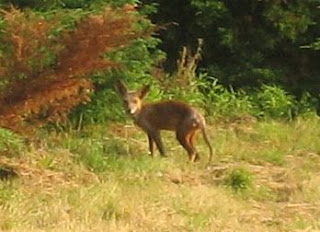