The American Chestnut Returns To Princeton 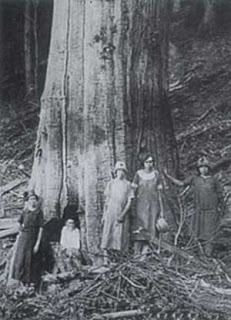 There's an extraordinary story to tell about the American chestnut. Most of us have never seen one, but they were once a dominant tree in the eastern forest.

Next month, Friends of Princeton Open Space will host a talk on the return of the great American Chestnut to the landscape. Sandra Anagnostakis, of the Connecticut Agricultural Experiment Station, will describe her decades-long work to bring the native chestnut back from near extinction. The talk will be at Mountain Lakes House on Thursday, May 6, at 7pm.

Through a collaborative effort with Bill Sachs, local expert on nut-bearing trees who is spearheading a number of local projects, Sandra will also be bringing twenty native American Chestnut seedlings for planting in local parks and preserves. Once a main constituent of the eastern forest, the American chestnut was nearly wiped out by chestnut blight fungus, which was introduced into the U.S. in the early 1900s via either lumber or chestnut trees imported from Asia.

To give a sense of what was lost, here's a passage from Wikipedia: "Mature trees often grew straight and branch-free for 50 feet (sometimes up to one hundred feet), could grow to be 200 feet tall with a trunk diameter of 14 feet at a few feet above ground level. For three centuries most barns and homes east of the Mississippi were made from American Chestnut."

The exotic fungus, which kills the above-ground portion of the tree but not the root, caused this most important of eastern American trees to literally "go underground." Surviving roots still send up sprouts, which survive until they reach nut-bearing age, at which point the fungus again intervenes. Though the chestnut was nearly wiped out by 1950, the rot-resistant, fallen trunks of the trees were still a common site when I was working in the Massachusetts woods in the mid-70s.

The trees Sandra will be bringing are 15/16th American, 1/16th Japanese. Her experimental work to restore the American chestnut to the Connecticut landscape uses a combination of disease-resistant hybrid seedlings and inoculation of existing native sprouts with the virus that transforms the blight pathogen to a less virulent form.

One blight-resistant American chestnut, developed by another breeder, was planted some years ago at D&R Greenway by local arborist Bob Wells.

It's worth noting that the devastation caused by the unregulated international trade in plants and lumber, of which chestnuts and elms are two particularly dramatic examples, continues unabated. In Princeton, we will over the next decade likely witness a dieoff approaching the scale of the chestnut and elm dieoffs of the 20th century, as the emerald ash borer, which hitch-hiked to Michigan from Asia in wooden packing crates, continues its spread eastward. There will, in other words, be a lot of gaps in the canopy for the chestnut to claim, if its return is successful.