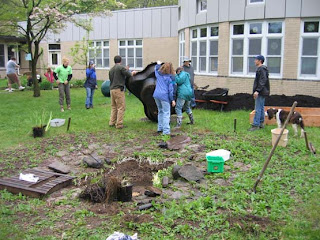 Cool, wet weather did not deter hardy Little Brook volunteers from their appointed grounds yesterday, as the courtyard garden got a working over. Here was one of the photo ops, as the pond lining got pulled out and cleaned.

The fearless leader of Little Brook gardening this year is Alexandra Bar-Cohen, on the left in the green t-shirt. 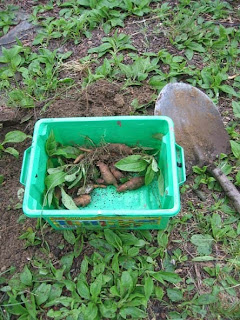 Surrounding the pond is a circle of Jerusalem artichokes, which is a deceptive common name for the native sunflower Helianthus tuberosa. The 8 foot high plants produce dazzling flowers and abundant tubers that can be peeled and eaten raw, made into french fries, or maybe even used as a water chestnut substitute in Chinese cooking (haven't tried that yet). The plants actually benefit from harvesting, which prevents overcrowding of the next year's growth. 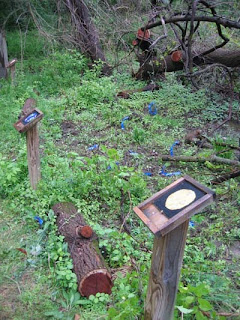 Meanwhile, out along the nature trail, Little Brook science teacher Martha Kirby and I planted some native wildflowers donated by the Friends of Princeton Open Space. One of the many trees that fell in the winter storm conveniently opened up a wet sunny area where we planted tall meadow rue, wild senna, fringed sedge and a native clematis called Virgin's Bower. The blue tags are a convenient way to mark and label the new plants.

Most of these plants were grown from seed collected along the canal--the goal being to expand the local range of native wildflowers that were previously limited to one or two locations in Princeton. 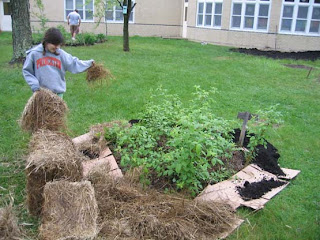 Back in the courtyard, my daughter Anna demonstrated the proper straw-dropping technique. In order to make a better border around the "RazzleDazzle" raspberry patch for the mowing crews to cut around, we layed down cardboard to suppress the grass, then covered it up with straw. It's a great way to slowly shrink your lawn.

In the background, the Community Park Elementary science teacher John Emmons tended to an herb garden. 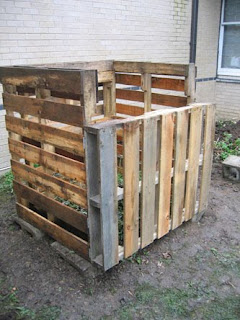 I was impressed by this new "garden pal" compost bin, made of pallets, including some fine hinge work for the front door.

Update: According to Diane Landis of Sustainable Princeton:
"The compost bin is the first of many the Sustainable Princeton residents working group hope to build at schools and for residents. The pallets were leftover from the school construction and were donated to the SP working group by Valley Road School. The hinges etc...cost around $10 and an instruction booklet was created to show how to build the pallets. The project aptly named Build a Bin will go to Johnson Park Elementary School next!"
Posted by Steve Hiltner at Monday, April 26, 2010