Planting the Extension With Something Other Than Grass 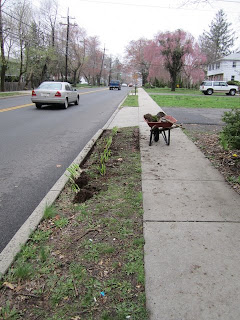 This spring I couldn't take it anymore. The sparse, beaten down patch of grass and weeds along the extension, that is. With hostas coming up in the backyard, as they have year after year, in places where I'd rather have something more interesting and dynamic, I decided to finally dig them out and test their florid toughness on the street extension. In the process, I'd be relieved of mowing a piece of lawn that grew more dandelions than grass. 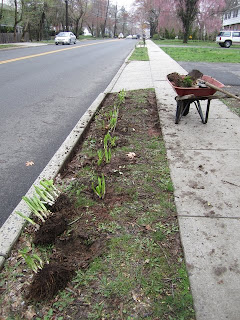 I spaced the hostas every couple feet, and dug soil away from the edges of the curb and sidewalk. The edging accomplishes two things. It removes all the grass and weeds that might have grown up along the edge of the mulch, and also serves as a wall to keep the mulch from spilling out onto the street or sidewalk.

Edging, along with the dirt displaced by the hostas, also provided several wheelbarrows worth of dirt that I could use elsewhere. It's always good to be thinking about where you need some extra dirt. A garden is like a miniature town, with a certain amount of excavating going on here, filling going on over there. Throw in a miniature farm (vegetable garden), a nature preserve (wildflower bed), a landfill (compost heap) for kitchen scraps, and a yard can have its own economy.

These loads of dirt were headed for the intersection of my yard with the neighbor's driveway. The water runs off his driveway and would head straight for my house if I didn't make a berm that directs the water instead into a garden bed far from my foundation. 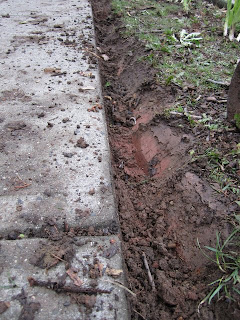 While digging out the edges along the sidewalk, I noticed just how impervious is the soil in the extension, which explains why the grass was so ratty. You can see the thick red clay underlying sparse grass. Suddenly, the project took on a whole new civic and environmental dimension. All over town, the thin strips of grass between sidewalk and street likely have similarly poor, porosity-challenged soil that absorbs very little of the runoff from the sidewalk. Close-mown grass has very shallow roots that do little to improve the soils porosity. Changing to deep-rooted vegetation, such as these sacrificial hostas, combined with mulching to discourage weeds and provide cool, shady habitat for earthworms and other soil life, will over time change a bit of impervious ground into an absorber of rainwater, reducing by some small increment the flooding downstream. 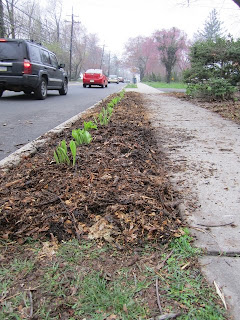 Here's the completed planting, with hostas hopefully positioned so that they won't grow out over the sidewalk. Ideally, a good rain would have followed to wash the dirt off the sidewalk, but a bit of sweeping finished the job. If all goes well and the plants don't get too big, the area will need little or no attention for the rest of the year.

Update: One helpful step, not taken in this project, is to lay several thicknesses of newspaper or a single layer of overlapping cardboard down over the grass and weeds. This if primarily to prevent dandelions, curly dock and plantain from pushing up through the mulch. Unseen under a covering of woodchips or other mulch, the paper or cardboard decompose slowly, remaining intact long enough to exhaust the weeds of energy reserves.
Posted by Steve Hiltner at Friday, April 15, 2011