Save!, With Naturally Scary Halloween Decor 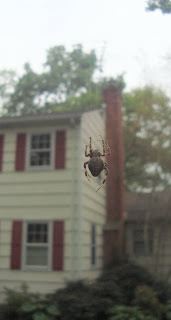 "Holy habitat!", Batman. What's a giant spider doing climbing our chimney? Influenced by E.B. White and Charlotte's Web, I decided to approach the spider as friend, not foe, and asked if it would kindly pose over our front door for Halloween. 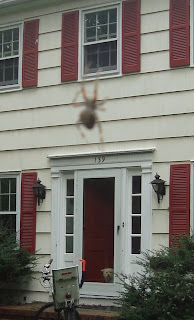 It proved to be an obliging spider, and will save us trying to find the fake spider stowed somewhere in the basement. 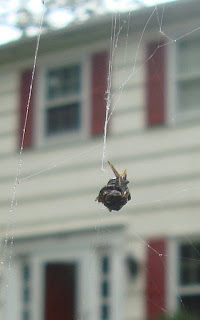 If the truth be known, these photos were generated a month ago when my standard approach to the house was suddenly complicated by some seriously strong fibers some twenty feet out. Suburban navigation is not usually impeded in this way. The fibers extended from a tree limb down fifteen feet to the ground, and held a spider calmly consuming its most recent catch, which appeared to be a yellow-jacket.

While I was thanking it for its good work in reducing the population of stinging insects, it apparently decided I would be too cumbersome to wrap up, and so headed back up to the tree limb, there likely to reconsider its web placement.

When I returned half an hour later, one of the two main vertical strands of the web had disappeared. The Wikipedia page on spider webs states that spiders often consume their own webs--a sort of recycling that is problematic for humans with store-bought Halloween webs.

For E.B. White fans, there's a good interview about the book "The Story of Charlotte's Web: E. B. White's Eccentric Life in Nature and the Birth of an American Classic" on NPR's Science Friday from August. It details White's careful research of spider behavior. Most amazing for me, watching the Charlotte's Web movie with my daughter years ago, was the "ballooning" scene, in which the young spiders make silk strands that become their sails to ride the wind to new locations.
Posted by Steve Hiltner at Monday, October 31, 2011