A Banner Year for Hickory Nuts, Hicans, Butternuts and Beechnuts 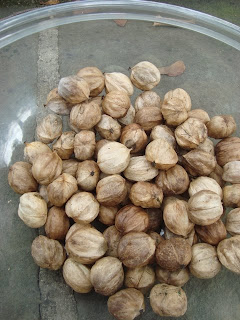 It's easier to dream of what bounty the forest once offered in a year when hickories and hicans are littering the ground with delicious nuts conveniently packaged for longterm storage. These in the photo are hickory nuts, which may trigger memories for some of Euell Gibbons pitching Grapenuts cereal. 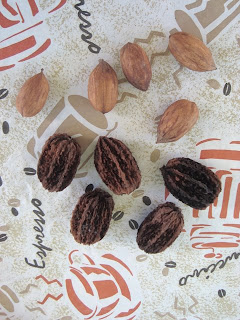 In this photo, hicans from a hybrid pecan/hickory tree rub shells with butternuts (Juglans cinerea), also called white walnut. The butternut, particularly one that is pure native and not a hybrid, is fairly rare and made rarer by butternut canker. The canker disease, like so many diseases and insects that threaten our native trees, was likely introduced from another continent. 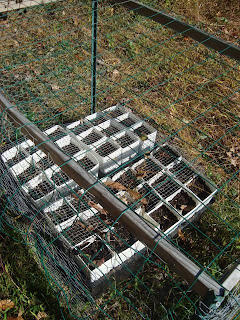 Some good news on that front is that local expert on nut-bearing trees, Bill Sachs, harvested 80 native butternuts from a local tree this fall, and has planted most of them in a small nursery for spring germination. He has already grown some from previous crops and planted them in various parks and preserves in Princeton, in an effort to help the species rebound in our area. 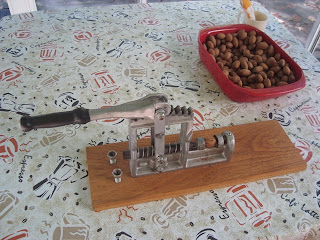 A good harvest of nuts deserves a good nut cracker--one that exerts pressure on either end so the meats inside don't get smashed in the process. 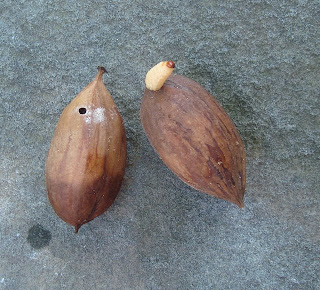 Given that this blog courageously endeavors not to turn its back on reality, and nature being what it is, there are some other--not particularly appetizing--species that take an interest in the nut crop. This, to me, seems like part of the adventure of real food, as opposed to the factory-like conformity favored on grocery shelves. Open-mindedness, though, is easier if the insects leave a goodly portion of the nuts untouched.

After collecting nuts from the ground, it's best to leave them in a metal bowl for a week or so to allow time for any pecan weevils to emerge. Nuts that don't have the characteristic exit hole should be fine to eat. 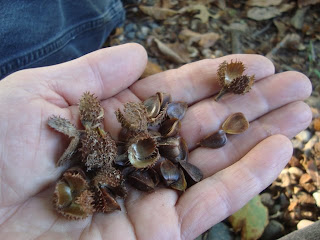 Another nut being scattered in Princeton's woodlands is the beech nut. Though it's reportedly edible, word of mouth has not been encouraging, and these in the photo turned out to be empty.
Posted by Steve Hiltner at Tuesday, November 01, 2011