Puerto Rico and Princeton--Parallels in a Rainforest 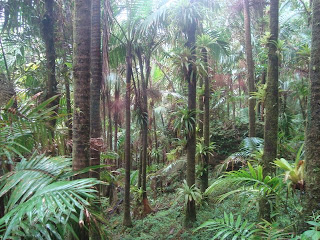 Even in a tropical rainforest, witnessed during a hike up El Yunque, it's possible to find parallels to Princeton's nature. El Yunque rises into the clouds 40 minutes southeast of San Juan, its slopes populated by a mix of palms and hardwoods. The Puerto Rican coqui frogs sing "ko-kee" along the path to the top. 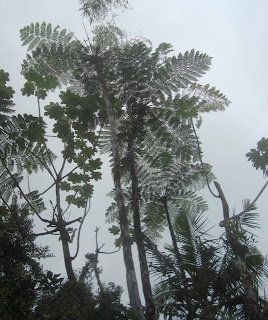 With only the diminutive ferns of temperate forests as a reference, one has to get used to the concept of looking upward at a 30 foot high tree fern reaching into the clouds. 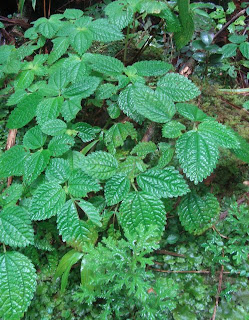 As in Princeton, nettles are found near streams, 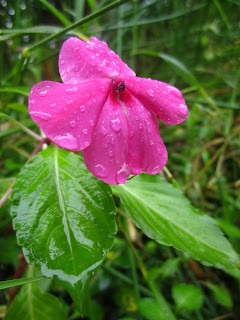 Since jewel weed (Impatiens capensis) is a frequent companion of nettle in Princeton's floodplains, it wasn't surprising to find an Impatiens species growing along the trails in a Puerto Rican rainforest, 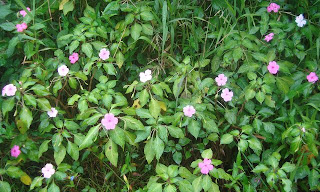 doing a good imitation of the Impatiens planted as annuals in northern gardens. 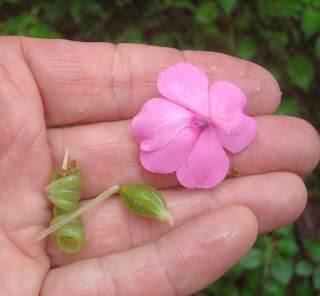 The Impatiens in El Yunque have the same spring-loaded mechanism for distributing seeds as our jewelweed. 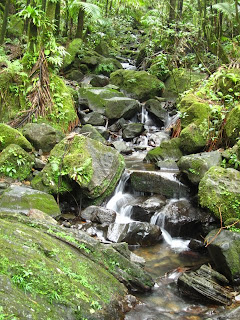 The mountain, with its opulent vegetation providing abundant surface area for water to cling to, acts like a sponge to capture rainfall and slowly release it into the surrounding lands below. Though it was recommended to take rain gear, we found that weather changed constantly during the day. If a light rain started, we needed only wait five minutes for some other weather to come along. I speculated, purely for the sake of speculation, that such mild, free-flowing, constantly transitioning weather would influence people to hold less tightly to moods. 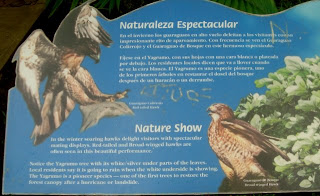 It was a surprise, in such an exotic world, to find information about two familiar birds. This sign tells of spectacular mating flights to be seen above the rainforest cainopy by redtailed and broadwinged hawks.

When I travel to other parts of America, I look for parallels to two species shot to extinction in the early 1900s in North America--the Carolina parakeet and the passenger pigeon. Puerto Rico's one remaining native parrot, which may share little relation to the Carolina parakeet other than family and color, still survives in small numbers in El Yunque National Forest.