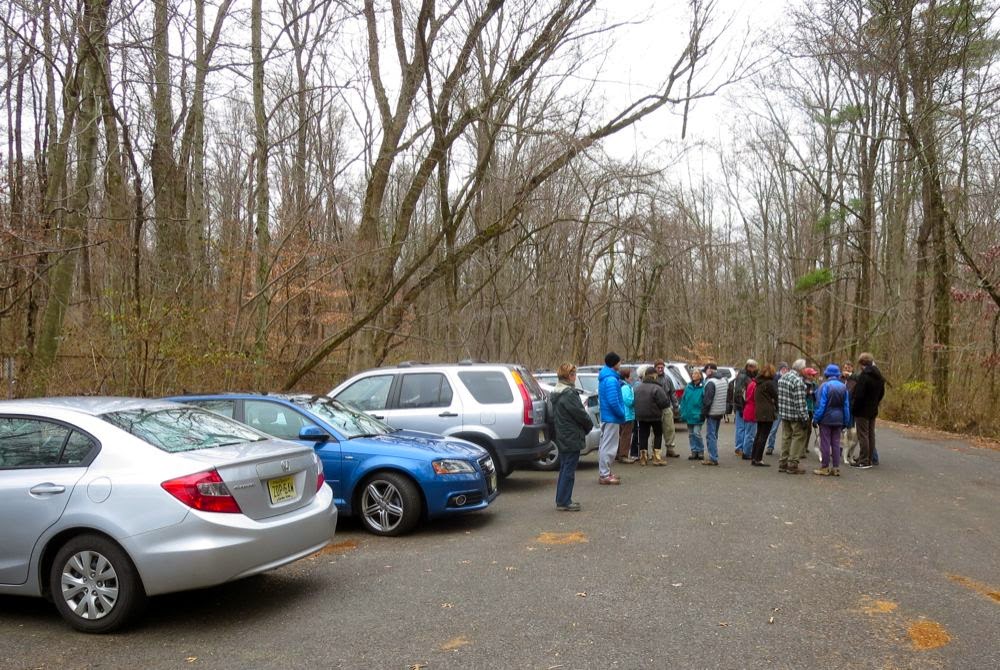 The parking lot was packed for our Thanksgiving weekend walk in Herrontown Woods. Forty people, all told, most of whom stayed for the full two hour venture up and over the Princeton ridge and back again. I explained that the preserve had, as in a fairy tale, gone into a deep slumber over the years. The trails had become overgrown with thorny multiflora rose, and blocked by fallen trees. The house and cottage were boarded up. Landmarks like the cliff had become obscured and forgotten. Then two years ago, what came to be known as the Friends of Herrontown Woods set about clearing the trails and making the preserve welcoming again.

Neighbor Ed Simon, who leads stewardship efforts at nearby Gulick Park, added some context, describing how a corridor of preserved open space in northeastern Princeton extends from Bunn Drive eastward through Herrontown Woods, with Smoyer Park nearby and Gulick Park beyond that. An overarching vision would be to develop synergy and connectivity between all of these elements, which include nature trails, history, the active rec of Smoyer Park, and remnant farm elements.

One of my favorite parts of the walk came early on, when I mis-spoke. Our first stop along the trails was at a solitary hazelnut shrub growing beneath a grove of trees with dark, chunky bark. As I was telling everyone about these trees, which I identified as tupelos (black gum), I gazed up into their canopies far above and noticed what looked like fruits on the twigs. Tupelos would not have that sort of thing. What I was seeing was beginning to contradict the words I was saying. Then one of the participants presented me with the fruits of persimmon that she'd found on the ground. Hmmm, there must be a persimmon tree around somewhere. Then I realized. The trees we were looking at were persimmons, not black gums. Though possibly wild, this dense grove of persimmon trees could also have been planted long ago as part of the farm. Impressively, they had grown fast enough to keep up with the forest rising around them after the farm was abandoned.

Second stop was the Veblen cottage, then a side trip to the Veblen House, where I got to tell a bit of the history of the Veblens and the first owners of the house, the Whiton-Stuarts. 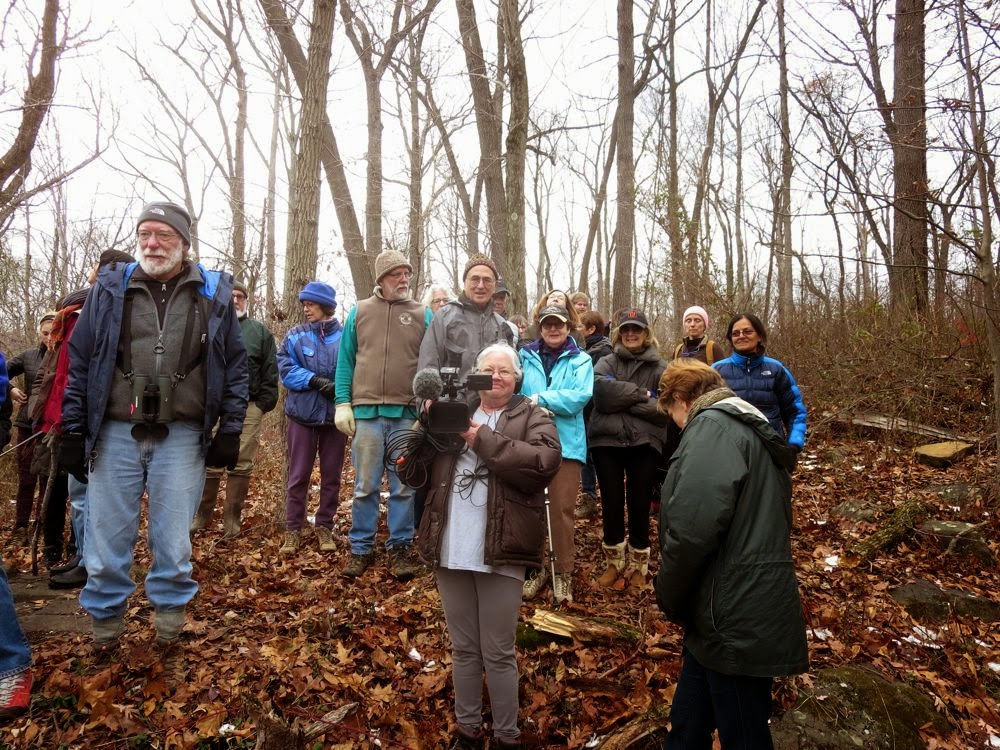 Then a hike up the slope of the ridge to the cliff, where everyone enjoyed the view from the thirty foot dropoff. That's Sally Curtis holding the camera. 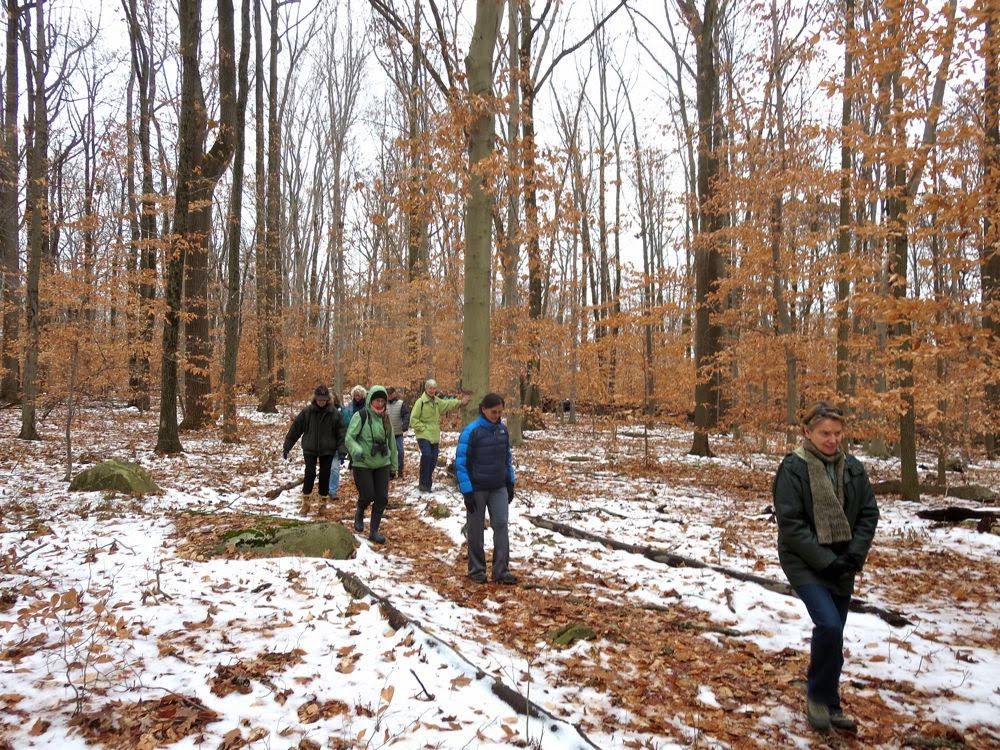 From the cliff, we crossed the pipeline right-of-way and entered the beech forest, which looked like a wonderland with the tawny beech leaves still attached to the trees. Not far in, we hung a right, heading off trail to the north, where a mysterious expanse of water was recently discovered by some of us in the Friends of Herrontown Woods. 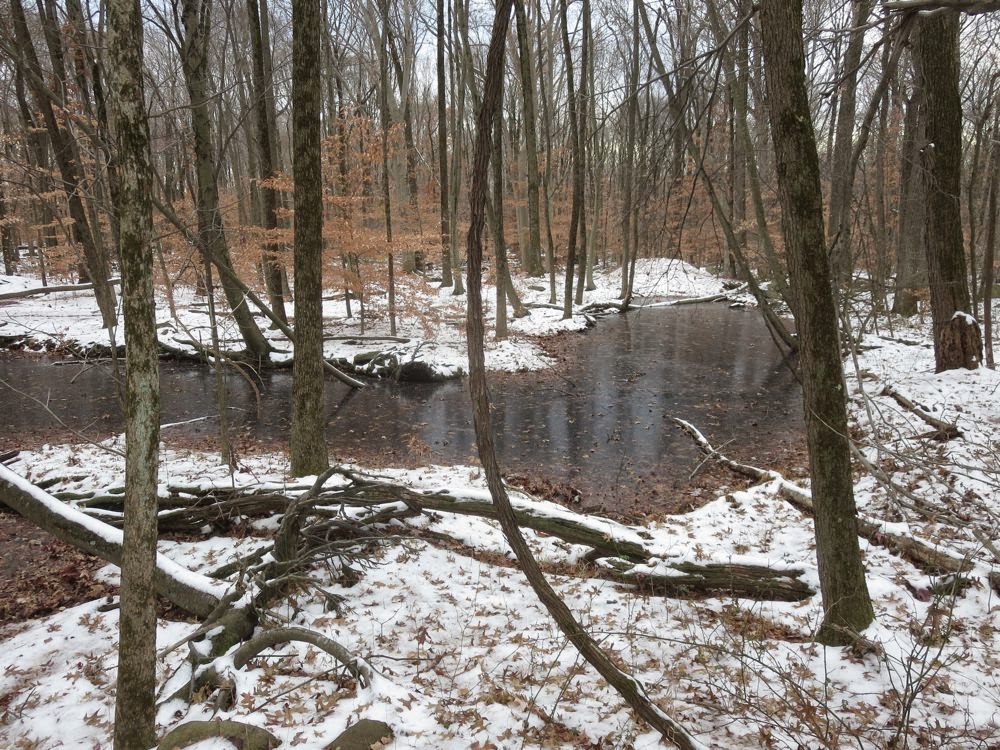 Here, in this flat pancake of land at the top of the ridge, which serves as a giant sponge that captures rainwater then slowly feeds it to the tributary of Harry's Brook that flows down through Herrontown Woods, a bulldozer long ago dug an L-shaped pool. A lively discussion ensued about its original purpose. Had they used the bulldozer to push up rocks for use somewhere else in Princeton? Seemed to me there were plenty of boulders available on the surface of the ground, with no need to dig. I used a stick to push down through the muck to solid bottom. Three feet deep.

For now, I'm sticking with the swimming pool theory, but it would make a great skating rink if we get a cold spell. 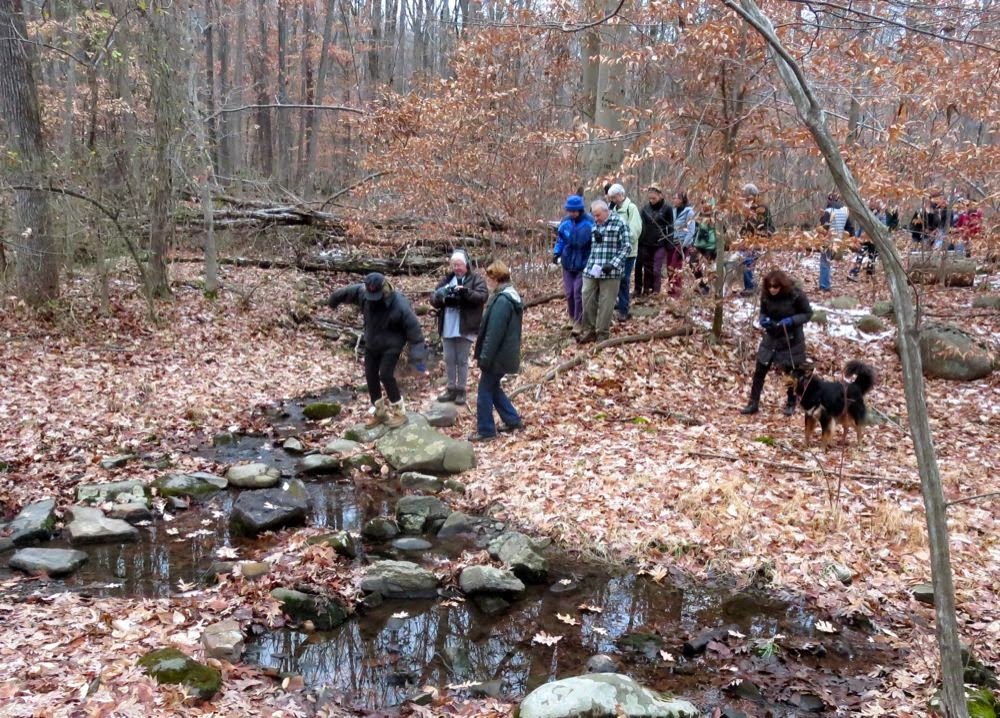 We then headed back to the trail, past the boulder field, and down along the creek whose broad, flat headwaters we had just visited. What a treat to lead such a walk, and introduce or reintroduce so many people to this reawakened preserve.
Posted by Steve Hiltner at Saturday, December 06, 2014