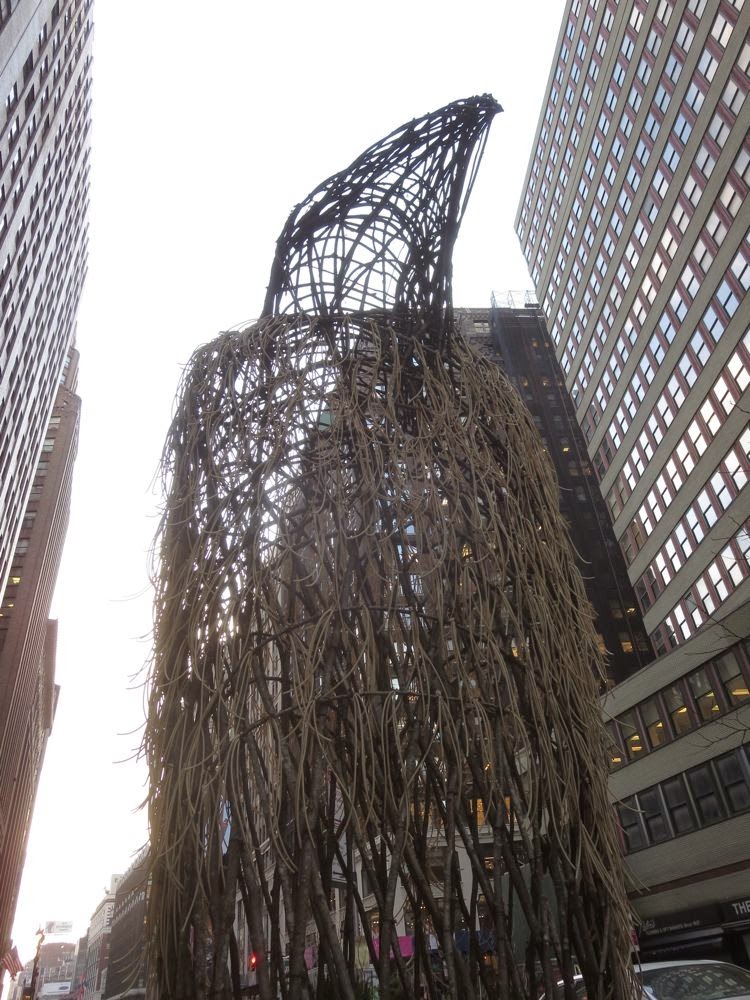 In New York City's Garment District, a giant hawk-like creature stands proud and somewhat menacing, as traffic swirls all around. "Crafted from maple saplings", it is one of five "Avian Avatars meant to indicate transformation, encouraging the public to heed to the stories about current human impact on the changing natural world."

This particular one represents a falcon named The Taste Maker, described as "an idealist, a philosopher and an opinionated vocalist with a social vision." Sounds like the falcon should have a blog. 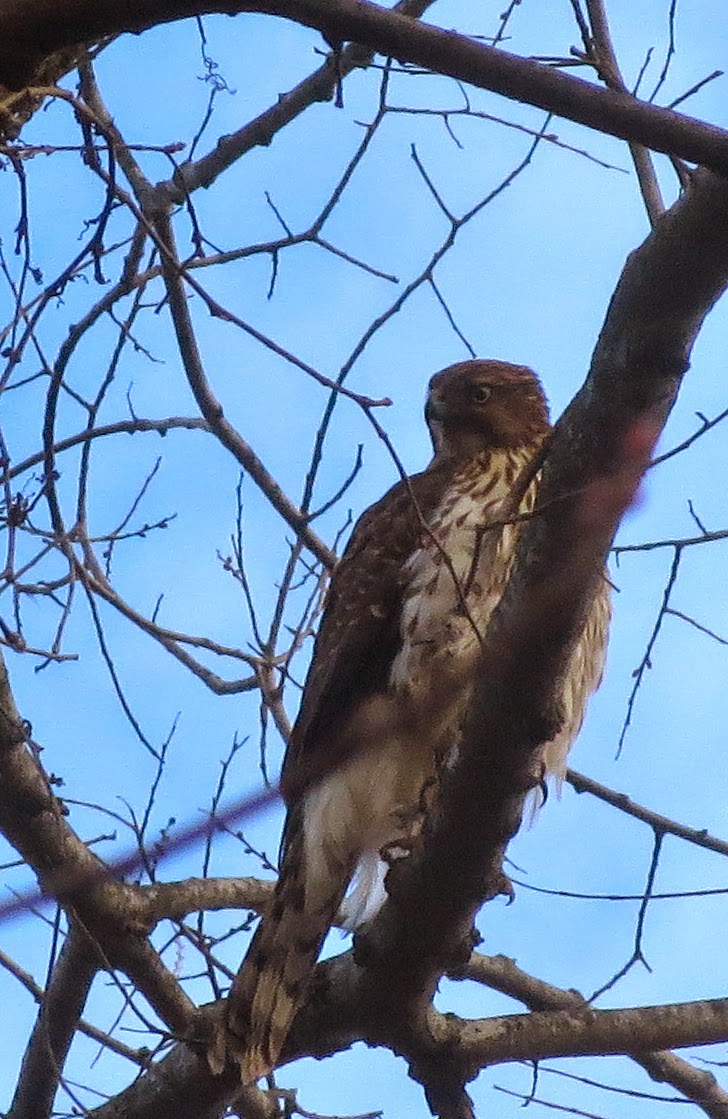 Out here in the suburban wilds of central New Jersey, nature is less filtered through myth. This Coopers hawk too stands proud, while indicating a transformation much more localized than climate change. Any ideals it might hold can't compete with the exigencies of hunger in a less than generous winter landscape. As for social vision, it goes along with the driving vision of nature, which in all its beauty and generosity is built on passing energy from one trophic level to the next. One creature dies so that another may live. 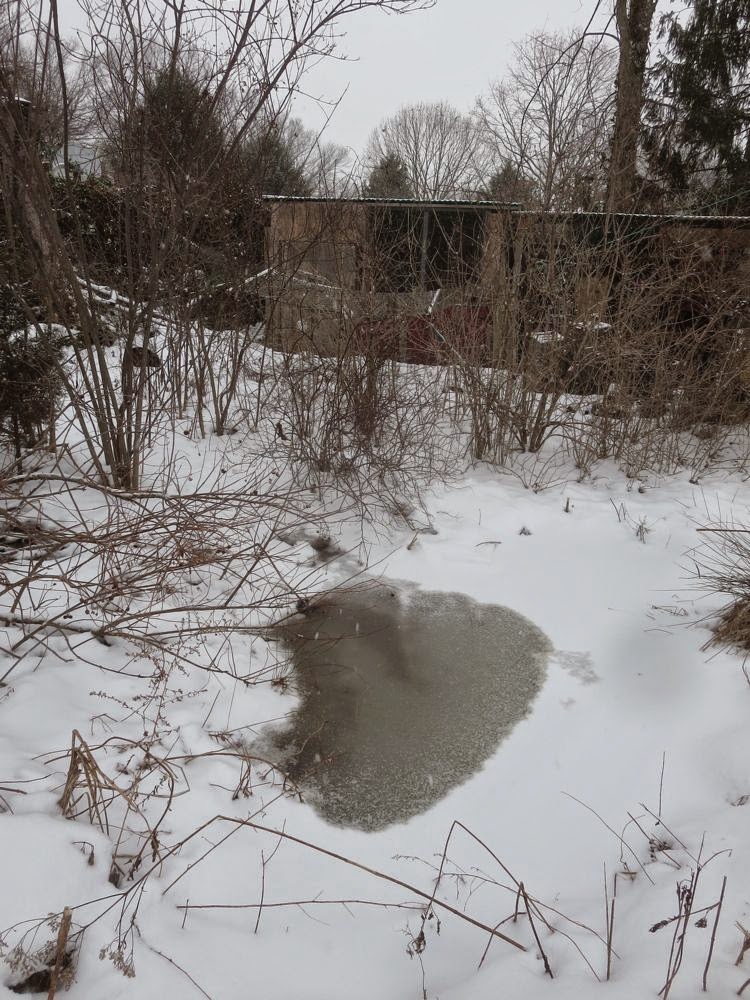 The hawk's most recent visit marked the end of an era, in a way. The backyard ponds still freeze and thaw, wax and wane. The native wildflowers planted along our reconstructed miniature tributary of Harry's Brook will rebound in spring. But one of our two chickens was less lucky.

We started several years back with four chickens--the ardent brainstorm of our younger daughter who I think was inspired by a movie she saw at school. Once parental resistance was overcome, the birds turned out to be a delight. We got them locally at Rosedale Mills, where they sell chicks in the spring so the birds have enough time to grow up before winter. Finally, a pet that truly enjoys the (fenced in) backyard, inspecting every square inch for any morsel of food. Skittering insects, wiggly worms, stray seeds--all were eagerly gobbled up and transformed into eggs with dark orange yolks. The hens got the run of the place all day, before being closed in the coop for the night.

Their success prompted followup requests for ducks--pleas so persistent that we finally caved, despite the seeming impracticality. The one-day old ducklings arrived in a box at the post office, in November--not prime time for frolicking in the backyard. They were unbelievably cute, like windup rubber duckies that followed us everywhere--endearing traits that surely contributed to their survival, first in a spare bathtub and later in a box in the sunroom, until spring came.

The ducks, too, flourished in the backyard, adding a complementary appreciation of water features to the chickens' preference for the backyard's terra firma. They loved the ponds, and thereby made a mess of the ponds, in much the same way our love of, and appetite for, the earth and its resources has made a mess of things. But at least their droppings on the lawn, unlike those of geese, were liquid enough to disappear into the ground, sustaining a landscape that was still people-friendly.

There was some attrition along the way. The first loss was a chicken early on, the one night we left them out. They had looked so happy perched up on a brick chimney on the patio that we got lax. A neighbor claimed to have seen a fisher that night. Raccoons seem curiously absent, perhaps because we have a dog. The second loss was to a Coopers Hawk one afternoon, in the fall, after the protective backyard foliage had dropped off. That daylight attack above all brought home the tough choice between giving the birds a high quality free range life and keeping them safely cooped up. Our grief was mixed with an awareness of how extraordinary are these wild predators, living by their wits.

Then there was a long spell of stability, as it seemed that the large, white Pekin duck, with its exaggerated waddle, big voice and intimidatingly pokey beak, was making all predators think twice. Along with this "guard duck", we had a smaller, more graceful runner duck and two remaining chickens, and were rolling in eggs, so to speak. Each duck produced daily, while the Aracana chickens each produced two blue or pink eggs every three days or so. We worried the ducks were talking too much during the day, but neighbors would tell us they loved hearing them. Their backyard calls were a welcome relief from the frontyard din of traffic along Harrison Street.

Whatever powers our guard duck had were not enough to deter a red-tailed hawk that finally shattered the sense of backyard calm on the evening we returned from the Climate March in Manhattan. I had been gone for five days, perhaps reducing the human presence in the backyard long enough to embolden the hawk. This time it was the runner duck, more upright, with more grace and less waddle than other ducks. It was enough to bring one closer in understanding of what a rancher feels after a sheep is lost to wolves. 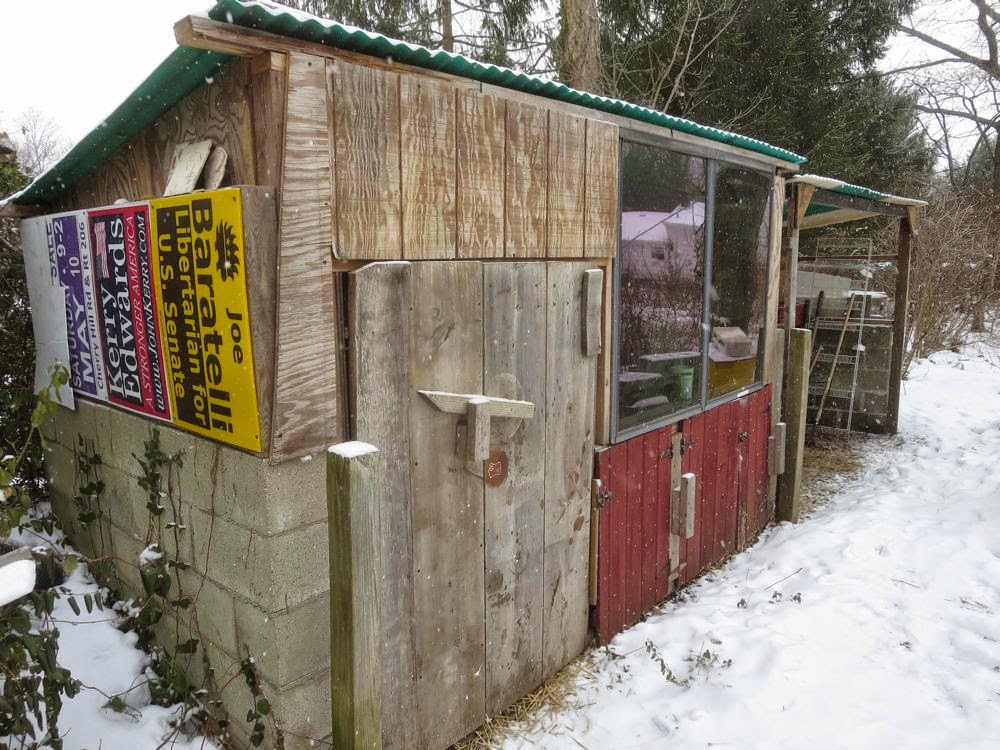 By this time, my daughter had grown to highschool age, with her interests largely flown elsewhere than the backyard chicken coop. I had become, as with the family dog, the default caretaker. When a Coopers hawk last month claimed for its meal her favorite chicken, a brown beauty called Buttons, she took things more philosophically.

Do these losses take an emotional toll? Should we have kept the birds penned in rather than expose them to the risks, freedom and richness of the yard? I really can't say if we'd do things differently. There have been some hard lessons about how nature works, but a lot of joy and delight. 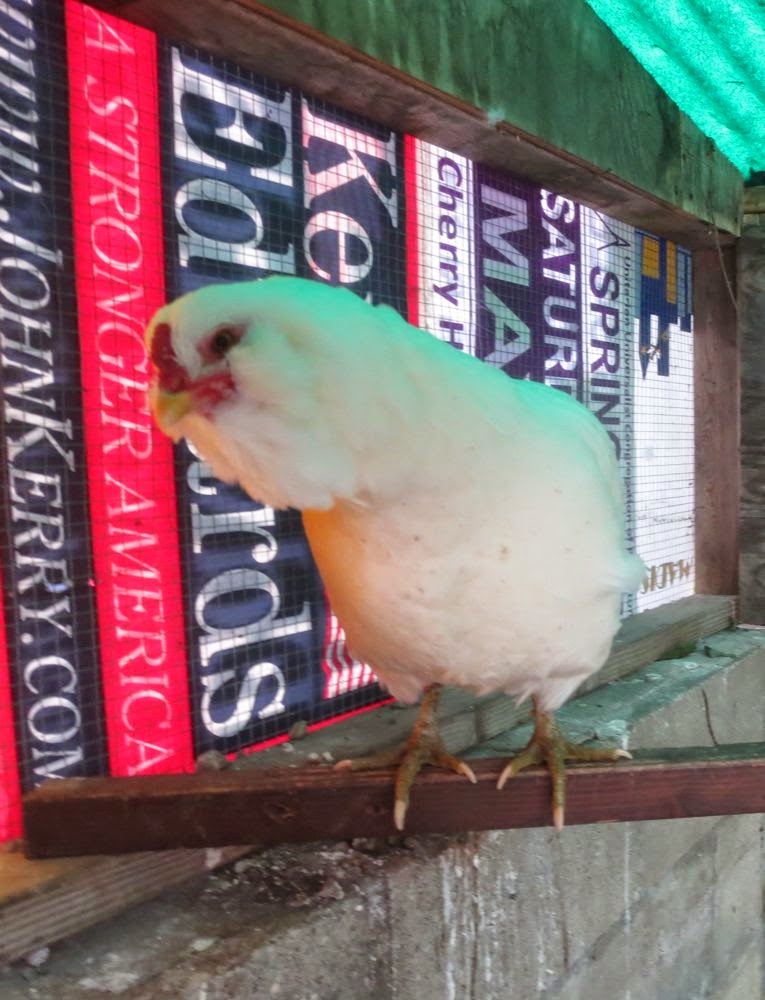 Our last remaining chicken, Buffy, keeps Daisy the Pekin duck company. The duck suddenly stopped laying last fall, and for awhile we had no eggs at all until Buffy started laying her baby blue eggs again, undeterred by winter's cold or the memory of the 2004 Kerry/Edwards campaign she perched next to at night. All those plastic signs left along the road can find new purpose winterizing chicken coops. Democrat, Libertarian--it matters little in this second life. I like to think that the air chambers in the hollow signs help insulate the coop a bit. Signs with hollow slogans might be even more effective.

One creature dies so that another may live. I'm not ready for that personally, but I'm ready to sacrifice, personally and collectively, so that changes don't overwhelm the lives of generations to come. There can be joy in that, too, a feeling of connectedness with those who follow--joy that comes with less risk, not more. Maybe that's the message to all who walk in the shadow of the looming falcon in Manhattan.

Past posts about our backyard chickens include the Joyce Carol Oats connection.