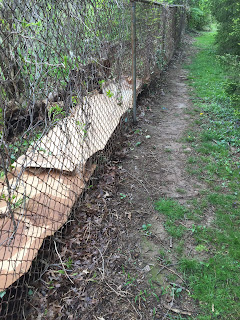 After weeks of inaction, paralyzed by inertia and wondering if once again the garden would bowl me over with its growing power, I finally ventured out with gloves, dirt-friendly clothing, and some clippers to take on some of the backyard's longstanding "issues". To my surprise, there was satisfying progress to be made, that actually built on progress past.

Many gardeners have "border issues", that is, plants invading their yards from their neighbors', or vice versa. A friend recently showed me how lesser celandine was continually spreading into his yard from his uphill neighbor, and there are many stories of bamboo's indifference to society's artificial boundaries.

For years, my yard had waves of english ivy coming in from three sides, but two of my neighbors, without my saying a word, got rid of all of theirs. And where my yard abuts the park in back, I was able to get rid of the parkside ivy by taking the liberty of mowing it, after which the parks crews apparently have been weedwhipping any resprouts. 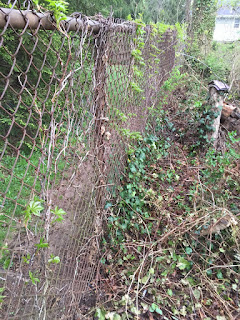 Taking advantage of the soft soil after yesterday's rain, I finally took on the legacy of ivy on my side of the fence, using physical means. The first phase was an on-hands-and-knees approach, pulling and cutting off any ivy growing on the fence. 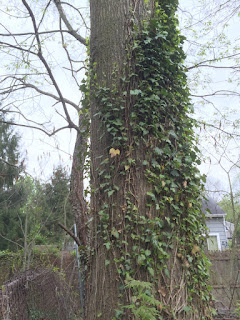 Ivy heading up a tree got cut at the bottom. No need to pull it down. Cutting at the base is enough, though some people find it more satisfying to pull it all off. 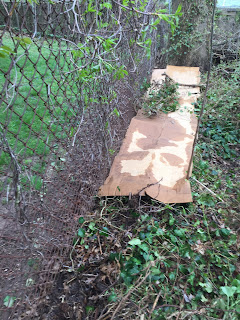 For phase two, large pieces of cardboard were placed along the fence, overlapping, and any ivy still exposed further in was pulled out and thrown on top of the cardboard, where it will dry out. Some native vines--virginia creeper, wild grape, and poison ivy--were pulled as well, though the main goal was to eliminate english ivy. Gloves, long sleeves, and periodic washing of any potentially exposed skin with water should be enough to avoid poison ivy's effects, but we'll see. 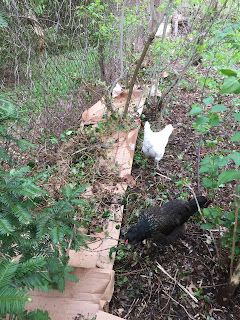 The chickens came over to inspect my work, and seemed satisfied. Phase three would be to cover up the cardboard with chips or some other organic material that will hide the cardboard and keep it from getting blown by the wind. But the cardboard will quickly disappear behind a screen of growth in the yard, and some exposed cardboard may prove instructive to park users, who may decide to try using cardboard to deal with their own border issues. 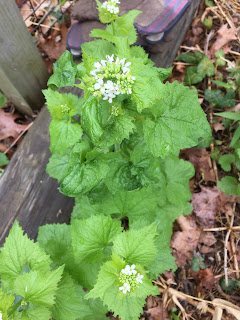 Elsewhere in the yard was additional proof of how even intimidating weeds can be controlled by timely intervention. Only a few garlic mustards came up this year, because they've been getting pulled each spring before they go to seed. 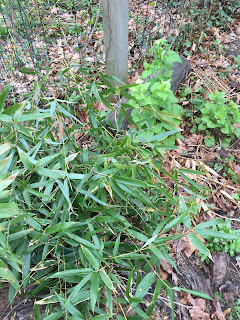 And the big bamboo patch that once was advancing across the fence on the north side is down to a few weak sprouts easily cut. Other weeds--the Canada thistle and the dandelions--got the undercut treatment with a shovel.

There is, of course, the option of eating the young leaves of garlic mustard, and I saw a chinese woman inspecting some bamboo clones across the street, in search of bamboo shoots. 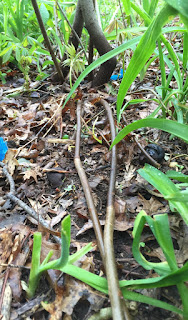 Some of the more aggressive native species got a rebalancing. A native floodplain species of goldenrod that spreads via underground rhizomes got pulled out in places. In the photo is the base of a bottlebrush buckeye--a beautiful native shrub that can start grabbing territory once established. It was a relief to discover that its expansionist ambitions are realized via above ground stolons that can be easily cut. 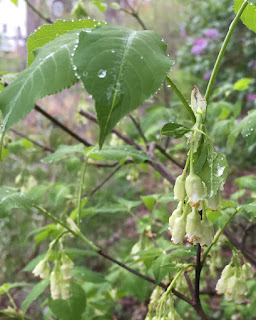 Mixed with the pulling and digging and rebalancing was some appreciating, of the subtle pendulant blooms of a Bladdernut, a native shrub found in only a few isolated spots in Princeton.