A letter I sent recently to the Town Topics newspaper in Princeton struck a nerve. It was about a pretty but very aggressively spreading nonnative flower called lesser celandine. One reader, I was told, even printed the letter out and distributed it to her neighbors, in hopes that they would take a look in their yards, and take action before the plant took over the neighborhood's flower gardens and lawns. My next post on the subject was going to be a critique of You Bet Your Garden, the widely heard radio program, whose website posting on lesser celandine is full of misinformation. It's both fascinating and alarming to see how even a supposedly authoritative source like Mike McGrath can end up spouting nonsense, which then spreads to listeners, one of whom in turn further spread McGrath's misinformation in a response to my letter published in the Town Topics this week. As with climate change, the intimidating reality of invasive species has led many people to seek refuge in denial of either the problem or the solution, or both.

In the meantime, below is the letter I wrote: 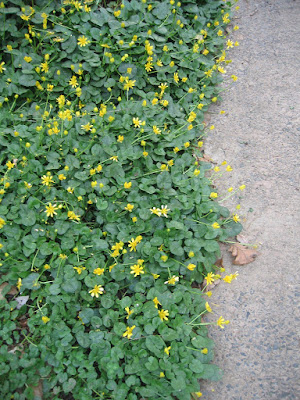 If you’ve noticed a little yellow flower starting to take over your lawn and garden, you aren’t alone. Appreciation soon turns to distress as the plant spreads to become a form of green pavement, outcompeting other plants, then leaving the ground bare when it dies back in early summer. It has lots of names—lesser celandine, fig buttercup, figroot because of its fig-shaped underground tubers, or the scientific name Ficaria verna.

Like many introduced species, it gains competitive advantage by being inedible to the local wildlife. Along with nonnative shrubs that wildlife also avoid, like honeysuckle, winged euonymus, privet and multiflora rose, lesser celandine prevents solar energy from moving up the foodchain from plants to insects to birds. This foiling of natural processes effectively shrinks the acreage of functional open space Princeton has worked so hard to preserve.

The most dramatic example of this plant’s dominance locally is in Pettoranello Gardens, from where it has spread downstream into Mountain Lakes Preserve. That situation is beyond control, but in homeowners yards, and many local parks and preserves, early detection and treatment can nip invasions in the bud. I’ve been encouraging homeowners and the town rec. department to take this work seriously, because one small infestation can quickly spread to affect downhill neighbors, parks and preserves. Effective treatments can be found online, but typically consist of using 2% glyphosate, the active ingredient in products like Roundup, the wetland-safe Rodeo, and other similar formulations.

As with the abuse of antibiotics by the meat industry, glyphosate is now vastly overused to grow bio-engineered corn and soybeans. That abuse has in part driven a demonization of herbicides in general. But just as antibiotics remain a critical medicine, various herbicides remain a critical means of dealing with invasive plants. Personally, my avoidance of herbicides is nearly total, but in the case of lesser celandine, with its tuberous roots, no other approach is practical. Only if there are just a few plants can one dig them out, bag them up and throw them in the trash, not the compost.

Adding to the distress of these radical transformations of our landscapes is a strange narrative that is showing up in places like the New York Times and the radio show You Bet Your Garden. Through a denial of both the problem and the solution, reminiscent of climate change, it claims that we should learn to love invasive species, and hate those who dare to take action against them.

This view cheats us of the deep satisfaction of identifying a problem and working together to solve it. This past weekend, as part of my work for Friends of Herrontown Woods, I was able to convince a couple neighbors of the preserve to treat their lesser celandine. By doing so, they will not only spare their own yards but also the stream just down the hill.

As a bonus, I got to meet some new neighbors. By taking our local nature’s problems seriously, we also build community.