Hands-On Learning About Invasiveness in Plants 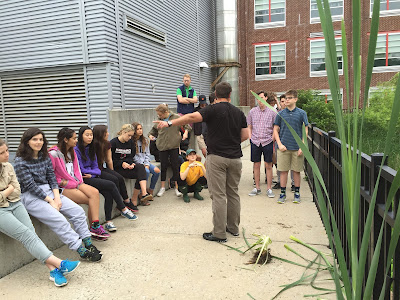 Environmental science teacher Jim Smirk brought his kids outdoors this spring to do some hands-on learning at the Princeton High School's very own ecolab wetland. Most people would call it a detention basin, but we planted it long ago with native wetland species that thrive on the beneficent, dependable offerings of the high school's sump pump. Yes, a lowly sump pump provides the consistent water flow that drives this lush community of plants. Without it, most of the plant species, along with the frogs and crayfish, would die out the next time a long drought came along. 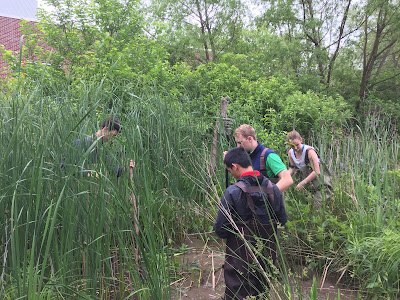 Jim enlisted me to provide some history on the planting to three of his classes, and also to explain why this manmade detention basin does such a good job of hosting wetland plants and animals. Like any garden, even a fairly wild one, it still needs intervention to maintain balance, since some of the native species tend to take over. Cattails, lizard's tail, and the native sunflowers spread aggressively underground, while the willows pop up in new places and quickly grow, hogging the sunlight.

Some of the more adventurous students donned waders and began digging up short- and broadleafed cattails so that some of the less aggressive sedges and wildflowers wouldn't be overwhelmed. 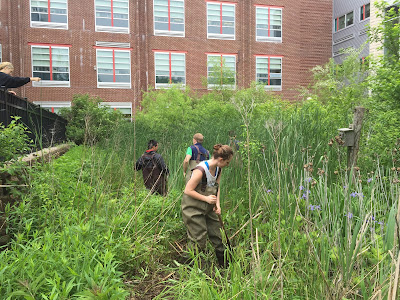 Others cut back willow, and removed a non-native plant called starwort that gained a foothold a couple years ago.

The students showed a lot of spirit, and were surprised that working in the mud could actually be fun.

Thanks to Mr. Smirk and his environmental science students for helping keep this wetland thriving right next to Princeton High School.