A Walk Along the Bluffs at Half Moon Bay, California 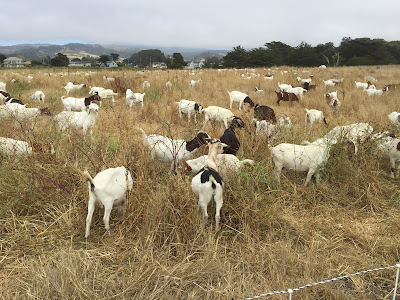 These aren't just goats. These are goats for good. As an eastcoast naturalist dropped down onto a windswept trail overlooking the Pacific Ocean at Half Moon Bay, I immediately began speculating about what goats were doing here in this parched coastal prairie. What's to eat in this land where no rain comes all summer. Days are warm, nights are cool, the sun shines, with little variation beyond that.

I'd seen goat herds munching on kudzu and other invasive plants in North Carolina, and read that they're used to clear powerline right of ways in the northeast, so it's not a stretch to guess that they are assisting in habitat restoration here along the coast south of San Francisco. Fortunately, I have a friend in the habitat restoration business in California, Bruce Berlin, who could confirm my hunches, and also identify the plants I saw them eating (photos and names below). I know Bruce through his son Kyle, who was valedictorian at Princeton University this year. Kyle's speech is a beautiful thing, special in all kinds of good ways. 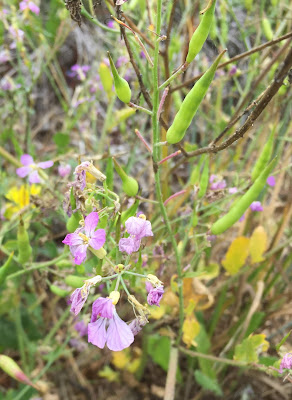 But back to the subject at hand, or foot. While most of the native plants are dormant during the summer dry season, introduced species like this jointed charlock are still green, making it possible to direct the goats' appetites towards eating the nonnatives.

People help too, organized by the Coastal Land Trust, but I'm guessing the goats they hire eat more invasives than any human herd could pull out.

"Goats for good" was a resonant phrase that popped into my head, but it turns out there is a real Goats for Good--a nonprofit that is making a better world, with goats. In fact, it's tempting to expand the goodness goats could do by organizing goat herders to descend upon Washington, D.C., for a Million Goat Munch. They'll gather on the mall for inspiring speeches, then be let loose in the hallways and offices of Congress, the White House and the Supreme Court, to consume all the papers filled with nonsense generated by people blinded by anti-government fervor.

It will be great, unless the goats also eat the Declaration of Independence, the Constitution, and whatever other useful documents still remain. Getting goats to be selective has always been a problem. Goats are most useful in highly degraded landscapes, which is probably what triggered the Million Goat Munch idea. 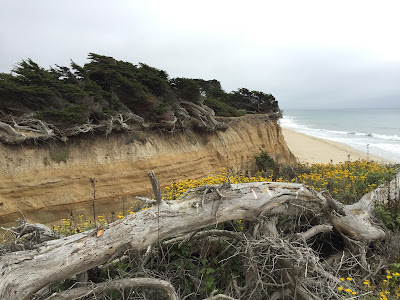 Though trees serve as windbreaks in the San Francisco area, historically the land was home to coastal scrub habitat that has become rare and requires work to bring back. 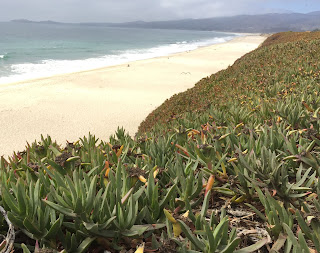 Habitat restoration is the means by which recovery can happen, but even this seemingly benign, uncontroversial activity has sometimes come under attack, most stridently in the San Francisco area, where lovers of the (Australian) eucalyptus have risen up in outrage when the trees get felled to help bring back the native flora. And the nonnative ice plant, shown here coating the cliff in monoculture fashion, can be attractive, particularly when in flower. It's an attractive tyranny, though, if viewed from the perspective of any other plant that might otherwise be able to grow there.


My friend Bruce, who makes his living doing habitat restoration in California, confirmed and expanded on my easterner's speculations:


"Glad you are enjoying the Coast of California.
Yes- many of the CA natives go dormant during our Summertime- though not all.
Yes- you are correct- most all of the plants you sent me are invasive non-natives that are opportunistic and problematic.
Yes- also- Goats and sheep have both been being used more and more to do weed control- and more often fire vegetation management in areas that are steep and inaccessible.
Those weedy grazing animals are also being used around ground mounted solar farms- but there they prefer the sheep, because goats have a tendency to hop up on the low- mounted Solar arrays !

Here is the website I use to dial in on what plants historically occur there." 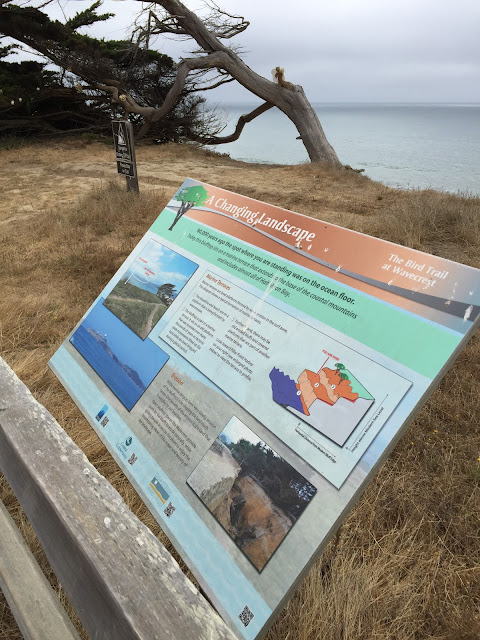 The Calflora website he mentioned looks to be an incredible resource for learning about and working with the plants of California.

Only one of the eight plants I photographed turned out to be native. This is typical of locations that were intensely farmed, then preserved. Weeds fill the void after farming stops. There may be some native plants mixed in, but they are likely as brown this time of year as the grass, awaiting winter rains to begin growing again.

Parting idea before the plant photos: Before releasing the goats into the habitat, rub native seeds into their fur so the seeds will slowly fall out and hopefully get planted "underhoof" as the goats walk the property. Or scatter native seed in the area before letting the goats in, so they will stomp them into the ground with their hooves.


Thanks to Bruce for IDs on these plants.