Childhood Landscape--Growing Up Inside The Minds of Visionaries

While reading a eulogy from 1935 found online, I realized that I had spent much of my childhood living inside the minds of some pretty famous visionaries. There were three I know of thus far, whose realized visions framed my world. 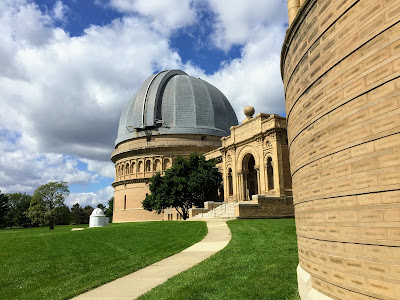 One was George Ellery Hale, founder of Yerkes Observatory, the iconic 1895 building where my father worked. Another was John Charles Olmsted--nephew and adopted son of famed landscape architect Frederick Law Olmsted--and designer of the grounds of the observatory. Those grounds served as my very expansive and semi-public front yard. 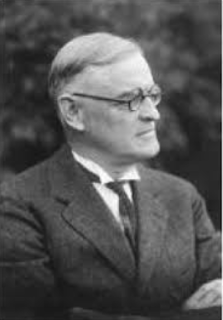 But the person being eulogized, and the subject of this post, was a prominent astronomer of the early 20th century named Edwin Brant Frost. He was director of the observatory from 1905 to 1932, and editor of the Astrophysical Journal. He was also the man whose love of nature brought into being my childhood landscape, and after a youth spent roaming that broad expanse of lawns, trees, and sidewalks surrounding Yerkes Observatory, my mind seems to have continued down pathways of thought similar to his. As an astronomer first and foremost, his head was up in the stars, but he was also a renaissance man who tracked the arrivals and departures of birds, loved music and singing, played sports. He was, for my childhood world, a hidden figure parallel in many ways to my "adopted ancestor" of sorts, Oswald Veblen, who in Princeton had long ago formed a link between the high intellectual pursuits of mathematics and physics, and the beloved natural world we experience during a walk in the woods.

Though it was Hale who in the 1890s conceived of and found funding for Yerkes Observatory, he soon moved on to other projects, leaving Frost to lead the institution for the next 30 years. 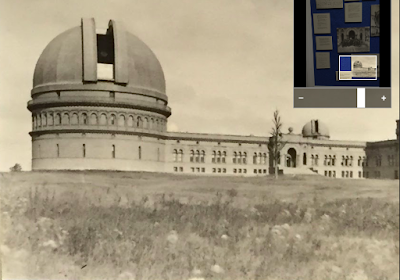 At that point, the observatory was "out standing in its field," as they say, surrounded by what in this photo appears to be Wisconsin prairie. Frost loved trees, however, and so hired the Olmsted firm to create a design for the grounds. 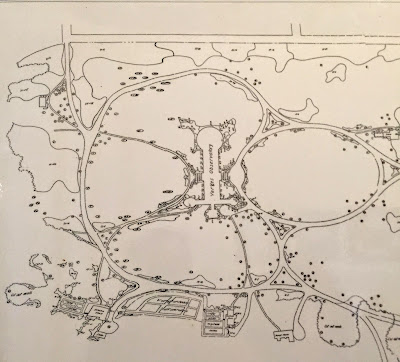 Strange, to learn as an adult that my childhood landscape was designed by Olmsteds, but there it is, seen from above, looking like a giant horseshoe crab with the domes of telescopes for eyes. These are the roads and paths I walked to school, and where my father taught me to drive. Along them lived astronomers like Chandrasekhar, who won the Nobel prize, Bill Morgan, Nelson Limber, and my father, Al Hiltner. 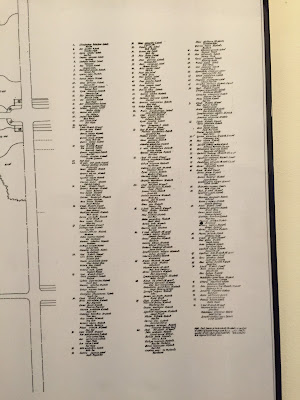 With a long list of trees from many continents, my childhood landscape, unbeknownst to me at the time, was an arboretum of sorts, with some trees having grown to be "state records" for their species. 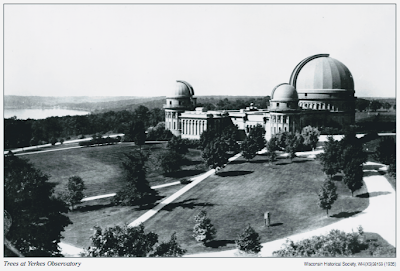 To a kid who, like Frost, took to sports, the grounds were primarily a place to play pickup games of volleyball, football, or baseball, or launch Estes rockets. As I tested my skill as a golfer, seeing how many shots it took to hit a ball all the way around the building, the trees were challenging obstructions to hit the ball over or around. The working class golf course next to Yerkes, where I spent summers seeking and only once achieving an under par round, turns out to have been Frost's idea as well.

Our astronomical enclave was perched on the outskirts of little Williams Bay, Wisconsin, chosen by the University of Chicago because of its littleness, as a place where telescopes would not be hindered by city lights and pollution. Despite the town's small size, there was also a handy railroad that came into town and could carry students and faculty back and forth to Chicago. It was in some ways reminiscent of the Institute for Advanced Study's location on the edge of Princeton, thirty years later. 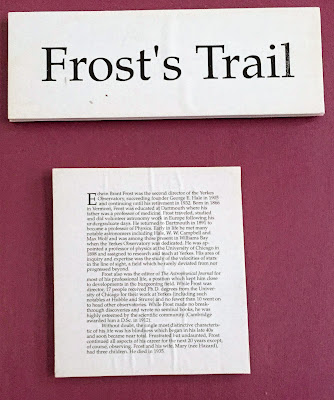 My path into town for school each day included a wooded path called "Frost's Trail." In his 50s, Frost lost the use of one eye, then the other, which normally would be catastrophic for an astronomer. Yet with the help of his wife and observatory staff he continued on as Yerkes director and editor of the Astrophysical Journal. A wire was strung from tree to tree along the wooded trail so that, with the help of a cane to wrap around the wire, he could find his way to work. Walking that path thirty years later, I would see bits of the long-since rusted wire, and imagine Frost having walked there, experiencing nature by its smell and touch.

In my child's mind, I somehow conflated Edwin Frost the astronomer with Robert Frost the poet. They both liked to botanize. Both were beloved figures. Both had the northeast in their bones. Edwin Frost's wife wrote poetry. So I wasn't too far off.

The eulogy for Edwin Brant Frost encountered online was written by the astronomer and artist Philip Fox, in the elegant, gallant style of the time. Here are some passages: 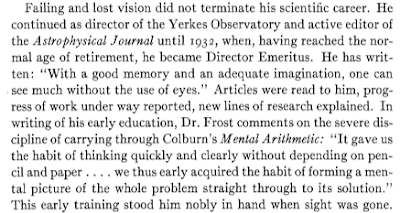 Most of the extraordinary people we know who are blind are musicians--Stevie Wonder, Ray Charles--certainly no one in as sight-dependent a field as astronomy. And yet in our era, so saturated with rich digital imagery, it is uncanny to learn that Frost not only coped but thrived without sight. In part due to having learned to do math in his head, he was able to visualize the world he could no longer see.

The dominance of sight causes so much to go unnoticed.

Frost kept records of the arrivals and departures of migratory birds, and even came up with a formula to predict the rate of a cricket's chirp related to temperature.

I made a brief return to Williams Bay in the 1970s, and remember walking Frost's trail one spring day when the woods was alive with birdsong, easily enough to fill one's mind with beauty without the aid of sight. One of the songs reminded me of a riff Charlie Parker often used to end his phrases.

Here's something lost from our culture, as people's lives become more urban--the notion that character is rooted in the land.

A nice expression of love for open spaces. Standing on the shores of Lake Geneva this past September, just down a path from the observatory, the lake relieved of the burden of tourists and motorboats that crowd it in the summer, I felt that extraordinary calm, with silence extending out in all directions.

This passage depicts Frost the astronomer almost as a rock star, conceivable in the early 1930s, when science and technology offered promise of a way out of the Great Depression and into an exciting new world. To demonstrate the wonders of new technologies like the photo cell, Frost conceived of using the light of the star Arcturus to trigger the lighting of the Worlds Fair on opening night. Arcturus being about 40 light years away, the light reaching Earth from the star would have just been leaving it 40 years earlier when Chicago had a previous Worlds Fair. At the appointed moment, the lights came on and the crowd went wild. Frost was celebrated for this poetic application of technology, then returned to the comforting open spaces and dark nights of Williams Bay two hours north. 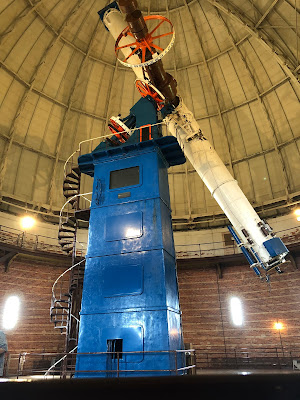 Since the closing of Yerkes Observatory on October 1 this fall, after 120 years of operation, my childhood landscape is in suspended animation. The grass is still mowed, the telescopes still exercised periodically but closed off from public view. The vision of Frost and others was a good one, but now awaits another.
Posted by Stephen Hiltner at Sunday, November 11, 2018