In the well-traveled world, there are special places people pass by everyday but have never noticed. This website is populated with many of these, places that lie hidden in plain sight as we speed by. This one is a scene from childhood, vivid in my memory but unknown to many who live there now. 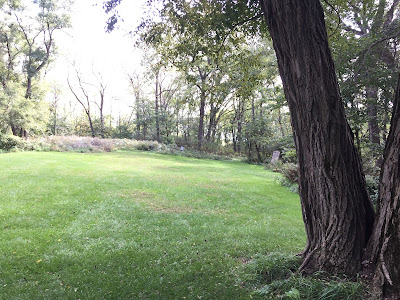 When I returned earlier this fall to the small town of Williams Bay, Wisconsin, on the shores of Lake Geneva where I spent the first 16 years of my life, one place I wanted to visit was a grassy bit of high ground called Vision Hill. What made this clearing in the woods special for me was not the view of Lake Geneva, mostly blocked by trees, but a small gathering place built into the hillside.

There were stone terraces for sitting, and a stone podium for holding forth. I may have only visited it a few times, it being on the fringe of my childhood orbit, and have no memory of ever seeing it used, but this special place in the woods has always played on my imagination. 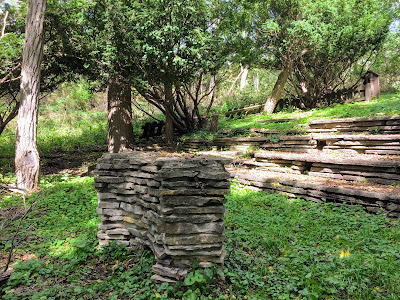 Having been prepared to find it completely overgrown, like a Mayan ruin, or even sold off and developed, I was surprised to find the lawn still mowed, the terraces ready for an audience to gather, the podium patiently awaiting a speaker. Unappreciated in childhood was the sturdy and well-crafted stonework. 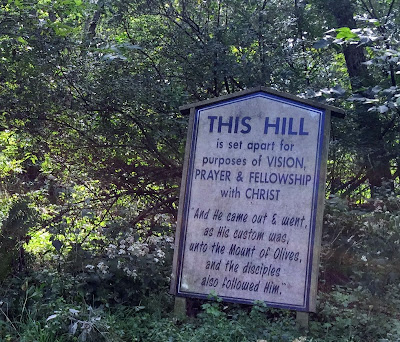 It was a surprise, too, to see signs still standing, carrying a religious message that somehow hadn't registered before. My memory had secularized this place, universalized the concept of vision. Regardless of religion, a hill serves all who seek vision, insight, perspective.

For a kid growing up next to Yerkes Observatory--a small but world-class astronomical enclave on the edge of town--religion meant getting up on a Sunday morning, putting on a skinny tie and heading down the hill into town to congregate at the Congregational Church. It was mostly my mother's idea, a legacy of her father, a minister in Ohio who, interestingly enough, also founded the chemistry department at the University of Toledo. He was a minister in the summer, an academician the rest of the year.

The strong faith he must have felt seems to have become diluted in subsequent generations. I'd hear the words, read a paragraph or two in the bible I was given, but none of it stuck. When we sat on the floor in front of the Sunday school teacher and sang "Jesus loves me, this I know", I felt reassured at the possibility, but no closer to believing. During sermons, I would gaze upward at the beautiful A-frame wood ceiling, or at the louvers from which emanated the rich tones of the organ, or at the elaborately carved eagle decorating one of the lecterns. The wood and the music were real, but God remained an idea. Church service is where I discovered that my dad's passion for opera didn't translate into being able to sing. He was an astronomer, and though I didn't pick up much actual astronomy from him, I got to visit distant desert mountaintops during his observing runs. Those telescope-studded mountains too were vision hills, where people could peer deep into the universe.  From my father I also gained a scientist's curiosity and openness to possibility. I didn't see much evidence to support religion's narrative, but have never fully rejected it either.

George Hale, the astronomer and visionary who founded the observatory where my father worked, also had a grandfather who mixed religion and science--"a Congregational minister who later became a doctor." For him, too, religion didn't take. According to an online history of Hale,


when his wife asked him to go to church “for the sake of the children,” he wrote: “Of course you must see that it is hard—really impossible—for me to reason one way through the week, and another way on Sunday. My creed is Truth, wherever it may lead, and I believe that no creed is finer than this.” 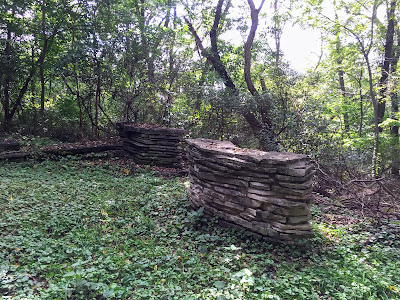 The podium, or pulpit, at Vision Hill turned out to be a perfect height for leaning forward to deliver a message, and when my congregation of two requested my CO2-We're an It sermonette, I obliged, hoping that the grandfather I never knew would have approved. 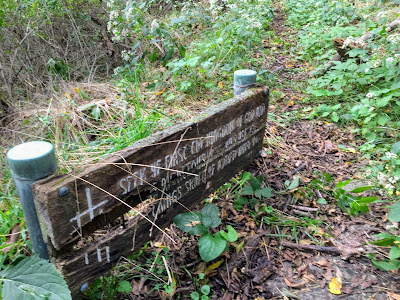 Botanically, the hill doesn't much reflect the natural splendor of a creator's original vision. It would be nice to think that spring wildflowers still bloom on the hillside, but in early fall, there wasn't much beyond weedy species coating the ground beneath some walnut trees, black locust, and ash trees succumbing to Emerald Ash Borer. It was heartening to see that stiltgrass has not yet reached my home town.

Nearby, on the side of the hill facing the lake, were a few wooden signs with quotes from the Bible, weathering with time like fading memories. 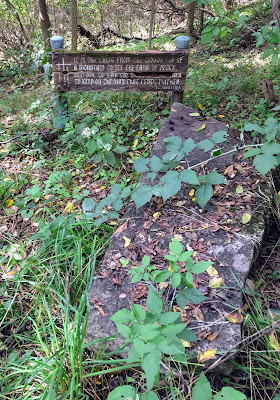 The signs are along a path heading up the hill from what in my day was called George Williams College Camp. Stone benches were set next to the signs to expedite contemplation as the hiker gazed out over the college campus and the lake. The trail is still used, but the overgrown benches have met much the same fate as my early religious training. Ground-ivy, also known as creeping Charlie or gill-over-the-ground, now blankets much of the hill with its tiny roundish leaves, a testament to what can be achieved by a weedy ground cover's slow spread over time.

Still, for anyone seeking remnants of their childhood landscape, this visit would have to be counted a great success--a sleepy hilltop improbably surviving a turbulent era, tended to and used just enough to match the memory. Better yet, I was able to show it to some of the Yerkes observatorians who live nearby but were unaware of its quiet presence just a short walk from the road.

The college's website includes a map showing its location (#11), with a short description of the walk leading up the hill. Interesting in the description that there was a "head for the hills" element in the origins of the outdoor chapel on Vision Hill--an escape from the racket of the motorboats on the lake. Here was a point of unity between the religious and secular worlds. Whether it was an astronomer peering into the sky, or a worshipper seeking communion of a spiritual sort, both of these activities depend on a lack of interference, be it light pollution or noise pollution.


"Another path leads to Vision Hill, once called “Inspiration Hill,” which was purchased in 1906. It was originally used as a place of worship when lakeside services became interrupted by the sounds of motor boats on Geneva Lake (one worshipper actually caught a fish during a service)." 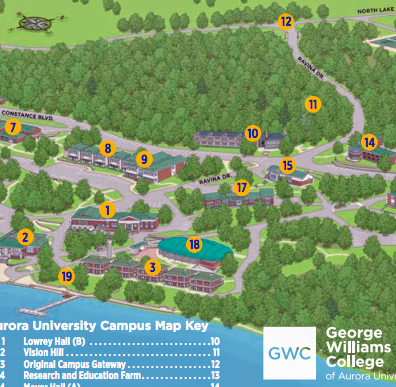