My Letter About Wildfire in the New Yorker Magazine 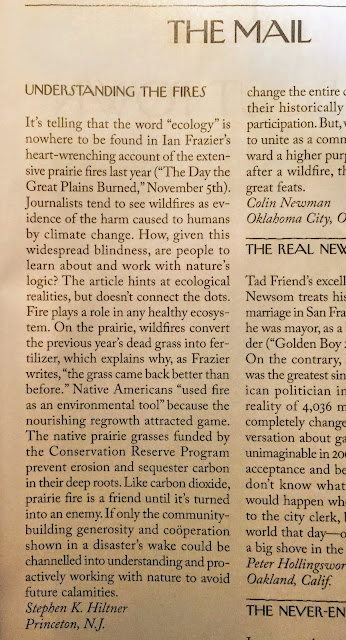 The New Yorker published another letter of mine, this time about the often unmentioned ecological role of wildfire. The letter was in response to an article by Ian Frazier entitled "The Day the Great Plains Burned." For someone familiar with the fascinating subject of fire ecology, even the article's title sounded curious. Fire has swept across the prairies for millennia, whether started by lightning or by American Indians.

As with most coverage of wildfire, the article's focus was on the destructiveness of the fire and the negative impact on people. What goes unmentioned in nearly all news coverage is that, depending on the intensity and frequency, fire can play a highly beneficial, even essential role in many plant communities.

The prairie grasses are well adapted to fire. Their perennial roots, unharmed by the fire, quickly sprout new growth afterwards, enriched by the nutrients released in the ash left behind. Like oak leaves and pine needles, the dead stems of native prairie grasses are resistant to decay--an adaption that encourages fire to sweep through, exposing mineral soil upon which their seeds can sprout.

Adhering to a compelling storyline of destructive fire, of brave firefighters, and of helpless victims, journalists cannot see beyond their preconceptions. To portray wildfire accurately, they would need to explain that wildfire is a friend that we have turned into an enemy. That is a more complex story less flattering of those consuming the news.

Similarly, and this part of the letter was edited out for space considerations, others look at nature and see only God's will. One very useful aspect of the article was the non-judgmental interviews with people affected by the fire. One resident put it this way:


“I’m not knowledgeable about that. Climate change, if it exists, might have something to do with the fires. But, whether it does or not, I know God is in control. He allows or causes the increase in fires to happen for a reason.”

“The fires are a wake-up call. They will get worse. We humans think we are in charge. We think we are indispensable to God, but he is showing us that he is in control. He is telling us that we need to find God.”

One way to accommodate both religion and science is to say that science is the study of how God works. That philosophy allows people to study nature as a means of better understanding God. More widespread, it seems, is the view that God acts directly upon us, and uses nature as a mere tool. This view, like the journalist's compelling but misleading storyline, blinds people to the ecological realities behind a wildfire.

The central challenge of the 21st century is to develop a healthy relationship with nature, to give back as much, or even more, as we take. To do that requires stripping away the filters that prevent us from seeing and appreciating nature's brilliant logic. Sometimes that logic, like rainy days and freezing cold, can be inconvenient, exasperating, even dangerous. More often, understanding reveals an elegance and beauty in nature's workings, and a way for us to participate in sustaining its balance and beneficence.
Posted by Steve Hiltner at Friday, December 07, 2018