Yes, spring can be lovely, with some cheery displays of daffodils, and magnolia trees in their glory. But it's also an all too good time of year to witness with dismay and alarm the ongoing and accelerating invasion of the Princeton area by fig buttercup. Also known as lesser celandine, it's a small spring ephemeral that seduces with its pretty flower, then takes over your yard and garden. 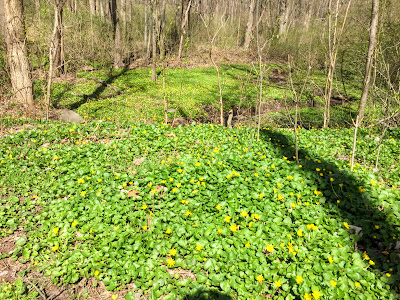 It has already radically changed the spring landscape over in the Pettoranello Gardens and Mountain Avenue area, and I've watched it spreading from yard to yard over the past five years in my neighborhood near Hamilton Ave and Harrison Street. 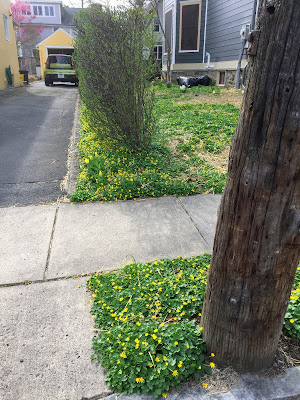 These photos are from Maple Street just down from Nassau Street, where a still localized infestation is radiating out from one of the yards. A yard will have one or two plants the first year, dozens the next, quickly multiplying to hundreds and thousands. It's pretty easy to see whose yard was first by the density and extent of the invasion. 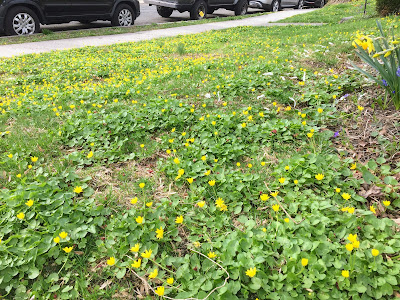 Across the street, the fig buttercup is taking over the lawn and flower beds. 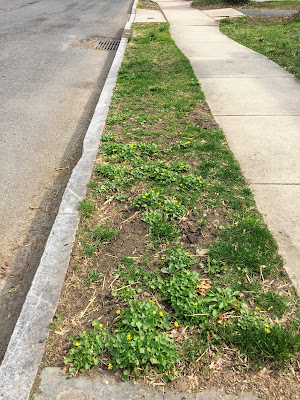 The next door neighbor has an invasion in its earlier stages.

Why be concerned? There are many degrees and styles of invasiveness. I'll compare fig buttercup with other aggressive plants below, but here are the essentials: Fig buttercup is an introduced species that has escaped any limiting factors that may have been present where it evolved. It's poisonous, so nothing eats it. The seeds and the abundant underground tubers allow it to spread rapidly. It can grow in the sun or shade, garden or nature preserve.

Some gardeners may feel relief that, like other spring ephemerals, it will fade back into the ground after a couple months. But that seems small consolation as it increasingly displaces other plants that might otherwise grow. 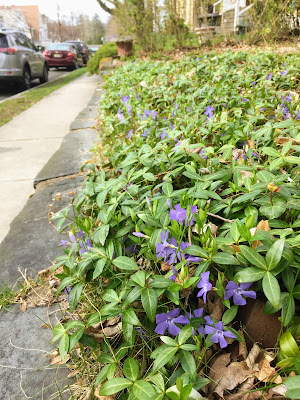 By comparison, myrtle is a groundcover that people plant and may later regret as it takes over flower beds. But it doesn't spread down the street to ultimately pave the local watershed. It merely vexes the gardener who planted it.

By the same token, wisteria vine poses a much smaller threat than porcelainberry. Though an abandoned wisteria vine can spread over an acre or more, weakening trees and suppressing all other growth, it doesn't spread by seed, so remains localized. Porcelainberry is a vine that not only smothers all other vegetation, including trees, but also spreads to new locales by seed. 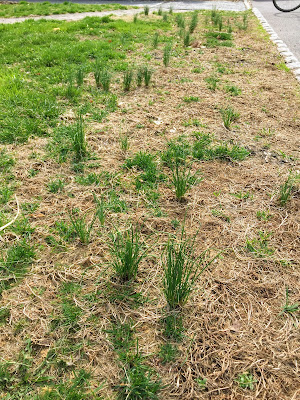 Most pesky weeds of the lawn--wild garlic, dandelion, false strawberry, ground ivy, etc--have not become problems in nature preserves because they are either edible to wildlife or intolerant of shade.

That's what makes invasives like fig buttercup and stiltgrass stand out as major threats. They spread rapidly, tolerate shade and a variety of soils, and nothing eats them. Since fig buttercup dominates in spring, and stiltgrass dominates in summer and fall, they represent a one-two punch that dominates the landscape visually, and leaves little chance for other herbaceous species to prosper. Since both are not eaten, yards and preserves become increasingly inedible for wildlife.

Fig buttercup can be confused with winter aconite, which also blooms early with a similar flower, but the leaves are much different. Though nonnative, I've never seen winter aconite spread beyond the limits of a yard. 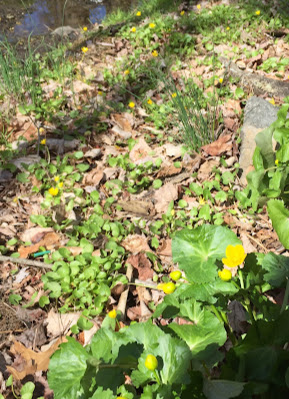 This photo shows the native marsh marigold in the foreground, with leaves much larger than fig buttercup's, which is in the background. (For a closeup comparison of the two species, click on this link.) The marsh marigold, by the way, is very rare. I've seen it only a couple times in the wild. I planted the one in the photo, over at Pettoranello Gardens, purchased from Pinelands Nursery many years ago.

Click here for past posts about fig buttercup (lesser celandine), including a letter I wrote to the Town Topics two years ago that struck a nerve.

What to do? If there are just a few plants, you can dig them up and put them in the trash (not the compost), being careful not to leave any small underground tubers behind. But though I've had organic sympathies all my life, and don't like to use herbicides, the easiest way is to use a squirt of 2% glyphosate on the leaves (Roundup is the most common brand, but more generic forms are available), or else some herbicide more specific to broadleaf plants. We take medicines, and when used responsibly in a targeted manner, herbicide can play a similar role in nature.

Environmentalism has been too caught up in good vs. bad, when the biggest threat to nature and ultimately ourselves, whether it be carbon dioxide or a pretty little flower, is too much of a good thing. 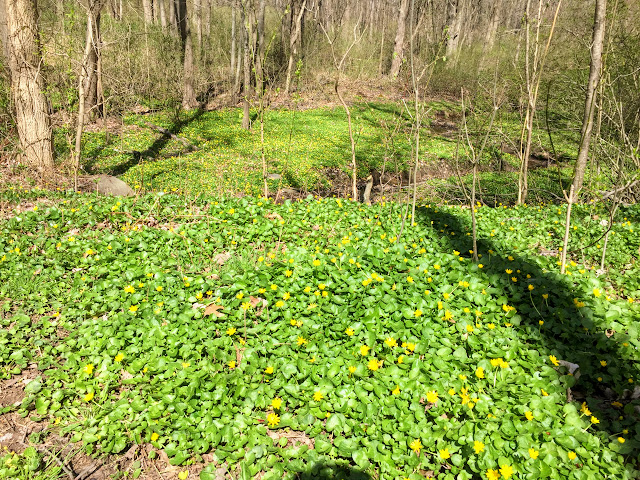