Maintaining a Towpath, and a Meadow 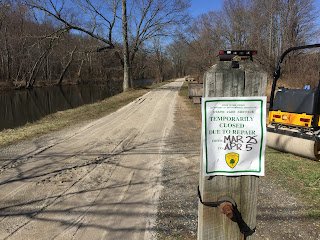 Visiting the towpath for the first time in a long time last week, I found a fresh layer of crushed stone being laid down. May this renovation live long and prosper, for we found out back in August of 2011 what massive storms can do to a wonderful facility like the towpath. That devastation lingered for many months, for lack of any funds to repair the damage. Now, apparently, there's been an infusion of funding, at least for the towpath and hopefully for the NJ parks department itself. 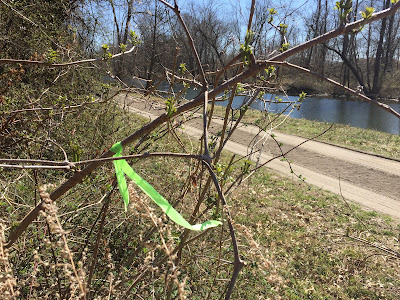 Most people go to the towpath to get some exercise and fresh air next to the water. I go to check on a little nature trail loop we created just upstream of the Harrison Street bridge. The first post on this blog, back in 2006, documents that first year's "harvest" of wildflowers after the state parks department reduced the amount of mowing it was doing in the meadow between the towpath and Carnegie Lake.

Thirteen years later, I'm still serving as steward of that meadow, marking elderberry shrubs so that the parks crew will avoid them during the annual early spring mowing of the meadow. Otherwise, the elderberries would have to resprout from their roots each year and never get a chance to bloom. 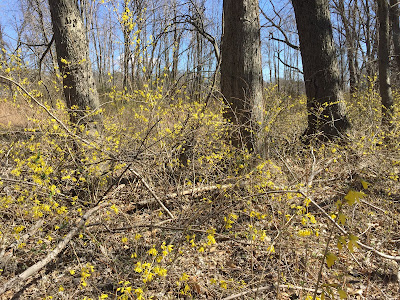 Along with the native wildflowers that bloom there in mid-summer, there are remnants of non-native ornamentals, like this row of forsythia, left over from when the towpath was planted by the university to ornament the entryway into campus. 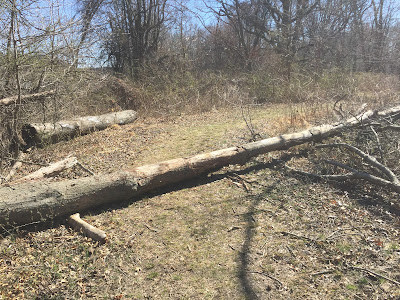 Spring is also a good time to inventory what else needs to be done when the parks crew comes to mow. Maintenance, seldom given its due, makes all the difference, whether it be a trail, a meadow or a planet.
Posted by Steve Hiltner at Monday, April 08, 2019